Josephine, the fate of a woman

The Empress Josephine by Pierre-Paul Prudh’on at the Louvre, 1805

An extraordinary destiny
“The mysterious Josephine”, who was not very well known, has been caricatured as an adulterous woman because of her lovers (Napoleon, himself, also had many mistresses) as well as a symbol of slavery due to her Creole roots (she was born in Martinique to a family of planter-aristocrats). Apart from these caricatures, the exposition at the Senate in Paris focuses on the personality of the young woman who knew how to take in stride a fate that she absolutely did not expect. When she married Napoleon Bonaparte in 1796, Josephine was a widow. Her first husband, with whom she had two children, Eugene and Hortense, was Alexandre de Beauharnais, Assembly Constituent president and Commander in Chief of the Army of the Rhine. He was executed on July 23, 1794. Marie-Josèphe-Rose Tascher de La Pagerie (which is Joséphine’s real name) was also imprisoned in the Carmes prison, with her first husband, and eventually she was released after the fall of Robespierre. After that, she became a socialite, settled in the chic area of la Chaussée d’Antin and made the acquaintance of a young and usually ambitious, Napoleon Bonaparte. A passion developed quickly between these two – and the young woman followed her man in his climb to the coup d’etat of 18 brumaire (November 9, 1799) and the proclamation of the Empire in 1804. Marie-Josèphe-Rose became Josephine. It was Napoleon who preferred this name and renamed her as well.

The tiara of Josephine

French elegance…
“The Insatiable Josephine”, woman of the world who was also attentive to fashion, jewelry, and perfume, as well as a lover of roses and the natural sciences. She loved roses, she put them in her hair and she trimmed her greenhouse with them –  all colors and all varieties. Next was the bee which was the symbol of the Emperor and was etched on furniture, his harp, and his golden dishes. Finally, her weakness was gems, such as emeralds, rubies, and cameos that adorned her countless jewelry but which very few pieces remain with us. We can still admire the display of beautiful ornate earrings with sapphires and diamonds as well as an exceptional cameo tiara which was executed from a single shell. The first jewel was given to Josephine by her brother-in-law, Joachim Murat, King of Naples. Josephine spent a lot, however; without regards to how much.  Maybe, this was to forget her grief of not having children with the emperor, a fact that before long led him to divorce her.

At the Château de Malmaison
Surrounded by her works of art, Josephine ended her life at the Château de Malmaison, which still reflects her tastes and passions, especially for painting and botany. Her taste for Greek style is evident even in her hairstyle and dress.  From there, you pass to the Empire style as the history of France took a more authoritarian turn, and France became politically unstable. At that point, the lights of the Revolution, seemed to fade into the ambitious pomp of the Empire. Napoleon did not hide his goal of conquering the world. 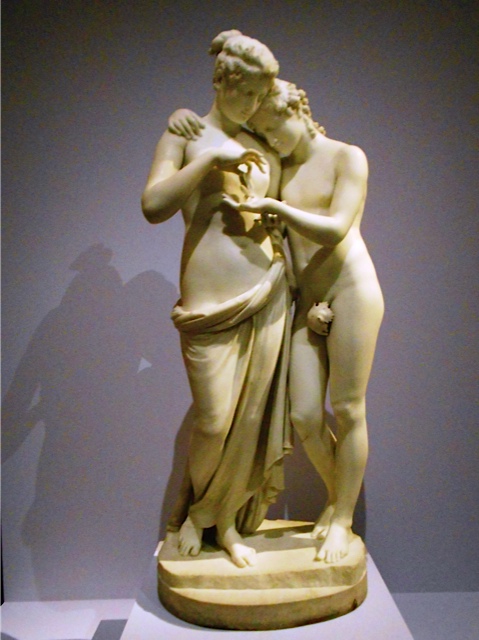 Photo by Julie Chaizemartin – “Cupid and Psyche standing” by Antonio Canova executed between 1802 and 1808.

Josephine focused on her image. She accumulated a large collection of paintings and sculptures including masterpieces of Canova, one of her favorite sculptors, with special attention to the Troubadour painters. When one speaks of beauty and jewelry, the name of Josephine seems to still be a point of reference, as evidenced, for example, by the heir to the jeweler appointed by Napoleon, Mellerio and Nitot, known today under the name of Chaumet. Her tiara has also become the symbol of the House as the collection is always called “Josephine”.

The personality and tastes of Josephine are therefore the Château de Malmaison.  The Château, which is not far from Paris, remains decorated in her image. Every piece of furniture and every detail of the decor evokes the presence of the young woman. She cultivated an “art de vivre à la française” that became famous. She collected an infinite number of plants and flowers. Her numerous portraits which help her charming face come alive were commissioned by painters from her time, such as Pierre-Paul Prud’hon ‘ hon, Jacques-Louis David and Jean-Antoine Gros whose finest works are visible today at the Musée du Louvre.

Exhibition on the occasion of the bicentenary of the death of Josephine, which occurred on 29 May 1814, the Château de Malmaison.