Outsider Art and Saint Pierre Hall
In 1989, the Anglo-Saxon Raw Vision magazine was the first to defend the popular creation apart from the norm, and give it an international dimension. Its catalytic and unifying role allowed the current craze for this art which was not really known in the 1980s. Twenty-five years later, the movement is far from losing steam : it has a great reputation, and it is at the Saint Pierre Hall, at the foot of Montmartre basilica, that one can find the exhibition “Raw Vision” that honors 25 years of art brut.

The setting is pleasant. In an old hall in the Baltard style, having once housed a market and a school, the exhibition is housed under a bright hall and let the visitor walk around the museum, that adjoin the cafe and the ephemeral bookstore. The atmosphere is casual, with the sound of bustle of tourists from around the world who climb the hill in a few steps.

The Saint Pierre Hall plays a very important role in Outsider Art in France. In 1995, it presented the exhibition “Outsider Art and Company, the hidden face of contemporary art.” This exhibition brought together six museums in one: five major collections around the parent collection from Lausanne, while conceding the French and international legitimacy to present Outsider Art and news.

An extraordinary art, an experience in high color
It is therefore an extraordinary and unprecedented art that is presented here. Raw Vision has the desire to present the works of marginal and unusual artists that stand out from those known by the society. Thus, the exhibition brings together works from all nationalities, English, Finnish, Russian, American, or Czech. The artists have all had a specific and an unusual path.

Adolf Wölfi born in the canton of Berne, was abandoned by his father at the age of 7 and then was placed with peasant families in which he performed the function of goatherd or farmhand. Following an arrest for molestation, he was interned at Waldau hospital where he lived out his life. His work is very varied, it includes collages, creative writing, and music scores.

In a very different vein, Scottie Wilson, Scottish artist, was illiterate and joined the army at the age of 16. Upon his return from the First World War, he began working in carnivals and circuses. After many adventures around the world, it became a dealer in Toronto, Canada and began to draw in the back of his shop at the age of forty. The works exhibited in Montmartre are all symmetrical, with Indian and Middle Eastern influences. 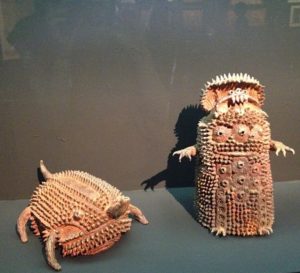 Finally, to the Finnish worker, Viljo Gustafsson, who had alcoholism issues and knew social deprivation and loneliness, art was a way to soften his existence. The long winter nights, charged with obscurities were to him filled with strange shapes. They fed his paintings, but also influenced his sculptures, representing strange animals straight out of his imagination. His works are a real work of introspection and were not intended to be exposed to the public.

So the visitor encounters marginal artists and enter in their world through their works. You can see all kinds of works of art on display, which is also the charm of this exhibition. The paintings introduced are either made in paint, ink or ballpoint pen. There are many influences, considering that the artists are eclectic. The viewer thus walks between paintings, photographs, statuettes or, sculptures of all kinds.

In fact, we never cease to be surprised throughout the exhibition. The carousel at Coney Island Duncan introduces a magical world. The carnival, ferris wheel, bumper cars and ice cream vendors adjoin a crowded beach, where surfers and whales coexist.
Finally, recalling the urban world, influenced by the Second World War, trams, trains and planes roam the landscape in the background. This lively construction, which moves all the characters around, represents eighteen years of work and are part of the life of Tom Duncan.
=> To see the animation structure: http://www.dailymotion.com/video/xyd6iq_tom-duncan-dedicated-to-coney-island-andrew-edlin-gallery-at-the-armory-show-2013_creation

After watching precisely Tom Duncan’s Coney Island ride, we arrive in a room where attention to detail is paramount. Carving on the head of pencils (Dalton Ghetti) on matches or pointillism (graphical method of decomposing tones in small separate keys), the viewer is not finished being surprised. We therefore can marvel at these incredibly detailed works. It is the discovery of an alphabet, a giraffe or a nail on the head of a pencil. The result is impressive and very amusing! 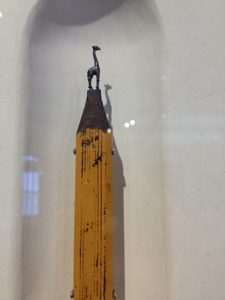