"Our walk led us not only thro..." /> The Orient Express or the opening of a new world – French Quarter Magazine 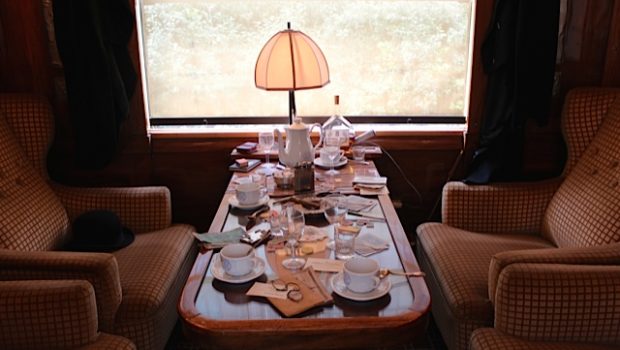 The Orient Express or the opening of a new world

“Our walk led us not only through space but also through time. We walked towards the East, but we also crossed the Middle Ages or the Golden Age … “
Herman Hesse, The Journey to the East, 1933.

The Orient Express: an unprecedented unusal and luxurious journey.
The first train reaching the West to the East, the Orient Express is the first revolution in the world of transport. It is to George Nagelmackers that we owe this technological innovation which will underpin the opening of the East. During a trip to the United States from 1867 to 1868, Nagelmackers discovered Pullman’s work and wanted to get inspired from it. In 1876, he created the Compagnie Internationale des Wagons Lits (CIWL) that operated all travel on the Orient Express.

George Nagelmackers established the route of the Orient Express for the very wealthy that was considered a privileged clientele (the fare was the equivalent of € 20,000). The train passed through five countries in Europe (France, German Empire, Austro-Hungarian Empire, Bulgaria, Romania), suppressing all borders and providing passengers with everything they might need.

Interior of the Orient Express – Photo by Lucie Pierron

Cars with interiors of polished mahogany, inlaid and decorated with the works of René Lalique, the famous master glassmaker, made this rolling palace a must for the upper classes. The ride on board was almost more important than the destination. Thus, the 42 privileged passengers of the Orient Express ate every day the most delicious meals in ideal conditions. A “driver’s car bed” in each car was there to meet every need of the passengers. Privacy was also needed. In cars, we found small private areas for courtesies meetings ; a red light indicated whether the car was busy or not. A position created by Nagelmackers was on the model of Pullman conductors on his night trains, the “butler” is an integral part of the decor. The fame of its customers (Josephine Baker, Agatha Christie …) and travel costs favored in its prestige. His prestige is based on the fame of its clientele and the cost of the voyage.

The new trains were launched in 1882-1883. They are the first trips of Train Eclair de Luxe which joins Paris to Vienna and the Orient Express train that connects Paris to Varna. Constantinople was, at the time, not yet accessible by rail. Travelers went there by boat through the Black Sea. It was in 1889 that the Paris-Istanbul direct line was opened.

A path to the rhythm of history and the evolution of new disciplines.
The success of the Orient Express was as a result its uniqueness but, also its constant adaptation to the Western world.

As a first step, the train journeys adapted to the geopolitics of Europe. Following the First World War, there were three empires crumbling: the Ottoman Empire, the Austro-Hungarian Empire and the German Empire. With exaggerated nationalism, routes are significantly reshaped and itinararies modified : the Orient Express now refers to a network of European cities joining Istanbul. This city has grown partly thanks to the prestige of these travels: capital of an empire in decline, it found its attraction thanks to the advent of the railway.

Thus, in 1920 the Orient Express ran again. The preferred route was the Simplon Orient. From Venice by the Simplon tunnel, it was the place of the « Roaring Twenties » and for honeymoons.
This innovation introduced a new aspect to travel. The company also developed Nagelmackers as technology or infrastructure projects that are emerging. The Simplon Orient owes its fame to the tunnel under the Alps, between Switzerland and Italy, which accelerated the journey and offered an opening for new lands that were now available such as Zagreb and Sofia. The cars used on this trip were new. Originally built in teak, they were now made of metal and painted blue with a double golden yellow border, details that made its international reputation. The train thus represented an era of progress called “technological” after the Second Industrial Revolution.

On the other hand, the mythical train marks the beginning of advertisements, given the evidence by the many posters that promote various trips. George Nagelmackers entrust the production of posters to famous artists like Rysselberghe that initiate a lasting tradition. To the trips offered, these poster designers are inspired by exotic and picturesque representations of the Bosphorus or the Great Mosque in Istanbul. CIWL Agencies also made available brochures and documents explaining the various services that can give substance to the dream. The first press releases were also held at this time. In October 1883 Nagelmackers invented the “press trip” for the inaugural journey of the Orient Express. Writers, journalists, diplomats, and military personalities were on the train for its first trip. They were invited in order to promote this new route.

The Nagelmackers train, therefore, marked advanced advertising, tourism and charm for the East for the upper echelons of European societies in Europe and the Middle East as a result of a full diplomatic and political transformation.

Mythical film and literary appeal for Orient Express – The Orient fantasized.
“At five o’clock in the morning, in Aleppo station, the designated train parked under the name of ” Taurus Express. ”
Murder on the Orient Express, Agatha Christie.

This attraction to the East is characteristic of nineteenth century society. From Chateaubriand to Victor Hugo, through Delacroix, all artists idealize the Eastern world as “exotic” in their eyes, such as the harems, mosques… In the twentieth century, this vision became true with the advent of photography and more realistic stories. Thus, Pierre Loti frequently borrowed the Orient Express to begin his travels that are the source of his stories such as Aziyadé in 1877. The train allowed one to satisfy the “thirst of the East” safely, since the roads were very unsure and uncertain. This trip allowed us to confront observed realities and those that are dreamed, it is confronting the disorder of the « souk dreams » of reality. Again Pierre Loti was very significant with this confrontation. An orientalist at the start, at the end of his life, he rejected this movement and denounced the Westernization of the East due to the development of tourism.

The literary influence is not insignificant. Agatha Christie also traveled with the Orient Express repeatedly. Her husband’s profession, archaeologist in Syria, led her to borrow train cars that inspired the drama she wrote. With Murder on the Orient Express, the famous train is honored and a drama is created in this scary train blocked by Yugoslav snow.
Here is a fun trivia fact to finish – there is a scene in a James Bond movie, « From Russia With Love » with Sean Connery that highlights the mythology of the train. The dining car was shown in more contemporary way. To your memories…