Published on August 22nd, 2014 | by Isabelle Karamooz, Founder of FQM

Isabelle Karamooz: Benjamin, how would you describe yourself in three words?

I.K.: Where did you grow up? What is your background? What led you to become a filmmaker?

B.W.: I was born in Saint-Cloud, but I grew up and spent my whole life in Versailles, except my years of post-Bac that I spent in Paris. That is to say my first three years of my B.A. in Modern Literature at the Sorbonne and my two years in the Master’s program at the school of Journalism Celsa. In 2012, I moved to Los Angeles where I joined the Directing Program at UCLA.
It was from an early age that I was interested in cinema. I had the habit of going to the movies after school on Wednesday afternoons. I was open to various French and American films that were shown in theaters. But it’s really in High-school that I became what I call a movie fan. This is where it developed and I dreamed of making movies.

I.K.: What are the festivals you have attended? Tell us about the next festival?

B.W.: PINK ZONE was selected first for its world premiere at the festival with Dances with Films which is the largest independent film festival in Los Angeles. We then learned that we were selected for the Action on Film International Festival which takes place from August 22 to 30. This is one of the biggest genre film festivals: action, science fiction, teen movies, thrillers… with a keen and knowledgeable public in terms of genre cinema. We expect to be overbooked, we will have an excellent screening Friday.

I.K.:  This year, your PINK ZONE feature film was selected to open the festival. Briefly, tell us about the film?

B.W.: PINK ZONE is based on a simple concept: what’s happening when a virus transmitted mainly by men to women were to arrive on Earth. The film is set in 2026. A virus has decimated almost the entire female population, except for some teens. Governments decided to create areas called PINK ZONE to shelter them within this perimeter to protect them. I called the film this because I’ve always loved the play of color in films and especially colors in titles. For me, the name PINK ZONE was also a bit ironic since it was the male population who had decided on the title and thought of the color PINK as the color for women and girls.

I.K.:  Did you make this film for a particular audience?

B.W.:  I made this film to tell a story that I hope will be universal, but then of course it’s not a film that can appeal to everyone. It’s a film that is basically very emotional. It is an intense film. That’s the word that fits it best. I love filmmakers who have experiences such as David Lynch. I love a movie with more a visceral feeling, one that is rather impressionistic. For me, it was an idea of departure. It is also an art film. There is an American critic who defined the film as a B series authors. I love this idea, this mix between a series B-side « operations to American genre film » and also a more European French side, author film.

I.K.:  How would you classify this style of feature film compared to other films?

B.W.: A filmmaker who, I think, makes films very much like this film would be Nicolas Winding Refn, director of « Drive » with Ryan Gosling. This kind of movie is at the same time between Europe and the United States, between the author type film and the American genre. This is something that is stylized and which focuses on the film’s characters and follows them closely. One can also think of a Coen brothers film « No Country For Old Men. » There was a big influence on American cinema of the 80s, for example, William Friedkin and the idea of the future as I saw it in Los Angeles in 2016. It was like a return of the past of 80 years ago in Los Angeles. So early on, I thought that the film should have pastel colors with a focus on the beautiful lights reflected on the skin of the characters.

I.K.:  What do you hope viewers keep in mind after seeing the movie?

B.W.:  I actually made this film with the idea that viewers can think of this film long after seeing it. That’s what I am trying to do. That is to say, when a viewer is able to rethink the film and he remains with his imagination by making him think about things he has already experienced.

I.K.:  What are your five favorite movies?

B.W.: I think of « To Live and Die in L.A. » by William Friedkin, translated into French as « Police fédérale à Los Angeles, » « Mulholland Drive » by David Lynch, « Breakfast Club » by John Hughes and a movie by the Coen brothers « No Country For Old Men. » And, « Vertigo » by Alfred Hitchcock.

I.K.:  What are your major film influences?

B.W.: An influence that is still present since he is not dead and he has always made films, it would be Christopher Nolan, the director of « Inception, » and « The Dark Knight » trilogy that is an influence on how he makes films. He comes from the American independent cinema. For me, the way he works influenced me as a director. He works quickly and on the budgets that are entrusted to him and in a very independent manner. That said, he does not spend hours working with actors who are very familiar with their characters. He gets what he wants fast enough. This is the main influence I have with the way I work as a director.

I.K.:  Tell us about your projects.

B.W.: Right now, I am writing my next film. I was approached by several production companies who are willing to finance it. It is a thriller with a touch of science fiction, a new film noir following the models of the great films of Billy Wilder with the figure of the detective and the femme fatale, but with a “twist” and a hint of modern science fiction.

I.K.: Thank you for taking the time to answer my questions. It’s been a great pleasure. 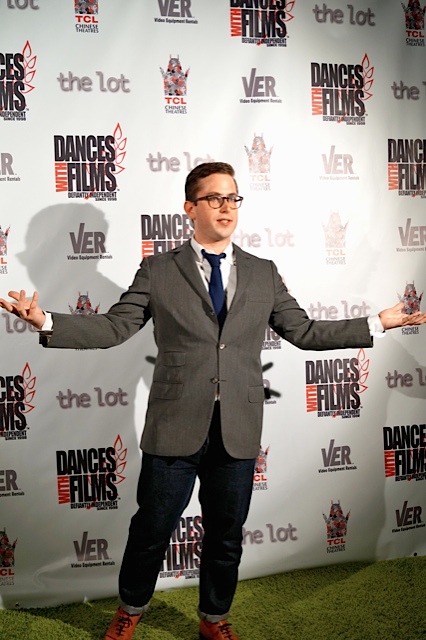 Walter Benjamin at the Dances With Films Festival on May 31, 2014 at the Chinese Theatre. Photo by Benjamin Walter