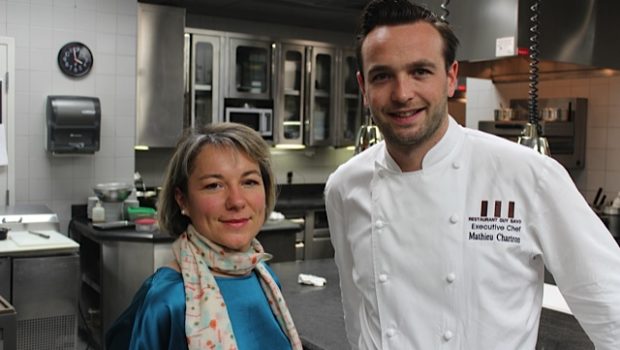 Published on September 15th, 2014 | by Isabelle Karamooz, Founder of FQM

Isabelle Karamooz : Mathieu, how would you describe yourself in three words ?

I.K.: When did you know that you wanted to become a chef?

M.C.: I never really asked myself this question. I always knew it. I come from a family that runs a restaurant in France. My parents have a restaurant in Southeastern Lyon.

I.K.: So you helped your parents in the kitchen?

M.C.: Yes, I helped them from the time I was 10-12 years old. Small things first, then little by little, a little more.

I.K. : Who has been a major influence in your life ?

M.C.: My father was. He is an example for me as well as Guy Savoy. Guy Savoy’s mentality and the way he treats his entire team, he has been a big influence on me. I worked two years in Paris before before I came here in 2008.

I.K.: And you are from the South of Lyon originally…

M.C.: Yes, I am from Saint Donat sur l’Herbasse, which is a small town next to Valence. My parents have a restaurant over there. They have a truffle farm too. My father has two passions: cooking and truffle hunting. Also, he grows truffles and goes truffle hunting when it is winter.

I.K.: You would say that the farm made you decide to become a chef?

I.K.: What big changes have you noticed over the last few years? (In regards to the food industry)

M.C.: A lot of changes. There are many more chefs who are settling in Las Vegas where I have lived for five years. They are restaurants with great quality of food. This was not the case five years ago. People appreciate more and more gastronomy and great food and are seeking great chefs.

I.K.: Has that led you to change any of the recipes from the menu?

M.C.: We actually have a menu that is called “innovation / inspiration menu”, so this is a menu that we change often.

I.K.: How often do you change the menu?

M.C.: We change the menu every season and whenever we get a new inspiration. That is what is nice with that menu. We still have the classic dishes that do not change from the menu like the artichoke soup with black truffle. Dishes like that stay on the menu for twenty years. People ask for it and actually come for it. Ninety-eight percent of the clients who come to the restaurant order this soup because they love it and even if they don’t order it we offer a small cup of it for them to try, to taste it.

I.K.: Do you source as much seasonal and local produce as possible for Guy Savoy restaurant and does this have a big impact on the menu?

M.C.: Yes, all the produce is seasonal. For instance, we are not going to find asparagus in November on the menu, it doesn’t make sense. We get all the produce from California, most of them from there and from organic farms, also, in California. The only thing we get from France is the French cheese and the fish. We have fish from France, the sea bass, the line caught sea bass, the wild Turbo, and the red snapper. All fresh produce that we use come California. We just work with what is in season and we work the menu around what is available at the moment.

I.K.: What is available for instance in the Fall?

M.C.: What will be available soon is the pumpkin soup with white truffle coming from Italy. We present the soup inside a big pumpkin. In the Fall, we have game meats like venison, we have also “en marmite:” squab, wild duck and pheasant. Fall is the season for carrots so we will have a dish with carrots and lobster, and some sweet onions. We have also a dish made around chestnuts. Everything that is in season is on the menu.

I.K.: How important is it to continue to innovate in terms of menu selection?

M.C.: It’s very important, first we innovate for our regular guests. Some clients come every month and it’s important for them to try something new. We don’t want them to get bored eating at the Guy Savoy restaurant that is why we always change the menu and we have new dishes. We work really close with Paris, so when they have a new dish in Paris they transfer the recipe and sometimes we Americanize the recipe. In Paris, they will have a beef kidney or veal kidney or something that we cannot really do here. I think it’s really important for us so we don’t get bored. Those new recipes allow us and the all team to learn something new every day. We work as a team and I want them to be happy to come and create new recipes.

I.K.: Some American people believe that French restaurants serve small portions of food. What is your answer to this?

M.C.: I don’t think so. I have eaten at some American restaurants and actually left almost hungry after I ate. I think it’s the worst feeling when you finish a tasty menu and you are still hungry after it. If you have to go to In & Out {a hamburger chain} after dinner at Guy Savoy, it is the worst feeling! We serve little portions but enough to not be hungry at all at the end of the dinner.

I.K.: How has cooking for Americans changed in the last ten years? Has the American pallet become more sophisticated?

M.C.: Yes, I think of course the American palate got more sophisticated. People appreciate and have become more interested in food. There are a lot of people who are “foodies,” who are more open-minded. I have been in Las Vegas for five years and now we can have some dishes on the menu that did not exist seven years ago. When the restaurant opened, some dishes were not as popular as they are now. There was maybe too much flavor, but I think they are more open-minded now and understand better gastronomy.

I.K.: When someone leaves your restaurant, what do you want them to think?

M.C.: I want them to remember the dinner they had and that they don’t pass the door and say: “oh, what did we have.” My goal is for them to remember the experience for years and years. I think it’s really important. If we can just make them remember. It’s what an artist tends to do, of course. I still remember a dinner I had 14 years ago at Paul Bocuse.

I.K.: If you could relive one meal of your life which would it be and why?

M.C.: It’s before I went to culinary school. Every night, before dinner service in my parents’ restaurant, I would make Brouillade aux truffes. It is something that takes 30 to 45 minutes. You cook it in a “bain-marie.” My father always allowed me to do it before doing my homework and going to bed.

I.K.: What successes are you the most proud of?

M.C.: I am proud of learning English (laugh). I came here 5 years ago to learn English.

I.K.: And now you are the executive chef at Guy Savoy.

M.C.: yes, yes, it’s an accomplishment. Yes, this job and learning English were the first goals.

I.K.: Do you have a favorite dish that someone else cook for you?

M.C.: Yes, the first time I tried the artichoke soup at Guy Savoy. It was something really memorable. I did not cooked yet. I was in another station, but I tried it and that was a really good experience. You don’t see it anywhere, something that’s simple yet sophisticated with the brioche.

I.K.: What is next for Mathieu Chartron?

M.C.: Next, is the service (laugh). I will stay longer, I don’t know how long. The next step would be to take over my parents’ business, their hotel restaurant, from which they received their first Michelin star last year. Then, go back to my hometown and see what I can do for them.

I.K.: Thank you very much for responding my questions. Have a good service! 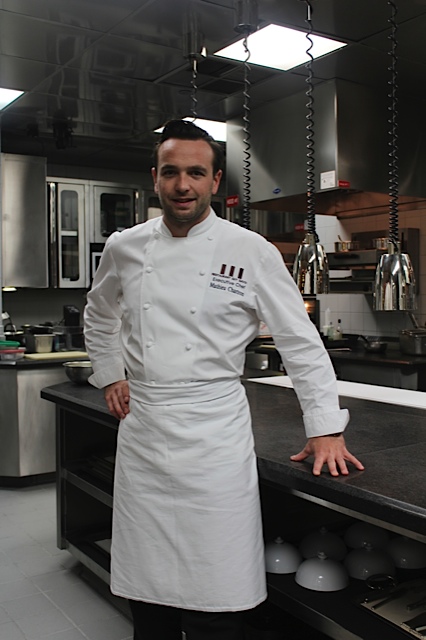