How Molière inspired Shakespeare : or the influence of French on English

Shakespeare and Molière. Photo by independent.co.uk

Whether you live in England, in the US, in Australia, or you are an avid English reader, you must have noticed: French is everywhere in the language of Shakespeare.

Our dear Academicians {Note: see Academie Francaise, French institution in charge, among other things, of protecting the French language} fight everyday for the survival of the French language, for its prosper use, against the invasion of English in our beautiful « langue de Molière », but do not be mistaken! French did, indeed, establish its headquarters among its British’s cousins.

« A recent example of « faux-ami » which resulted in an awkward moment at the butcher shop: I had decided to prepare a « Filet Mignon » for the dinner I was hosting that night. « À la Française » of course. So I asked the butcher for a nice filet for 6 people, and he started cutting beef. After about 10 minutes spent arguing about it (and getting hatred waves from the line of customers behind me), I finally understood that in the United States, we call Filet Mignon a beef filet or even by extension any nice and tender steak. »

Several examples. First, the Gallicism. A Gallicism is an English word, used in its French meaning in English, and here… we can find about everything: from « every day English » (entrepreneur, crayon, crème brûlée, rendez-vous, etc) to phrases (coup d’état, en route, à la mode, crème de la crème, etc). Yes, I am telling you: French is e-ve-ry-where! There are also English words with strong French roots (for example forest and forêt), or French words, French for real, but which lost their original meaning (the library and the « bibliothèque », famous faux-amis, taught to English students at school).

Conquest of England by the Normans in 1066. Photo by herodote.net.

Alright then, but why? Where are these words coming from ? (except from France of course) Linguists and historians tend to agree on the fact that most of this vocabulary entered the English language when the Normans invaded England in 1066. Quite a while ago, and no, Internet did not help. But why 1066 specifically? Actually, back then, England did not have an “official” language {as the US does not either today by the way} and people would communicate by using a wide diversity of Celtic and Germanic dialects, following occupation and installation of Romans, Saxons, Angles, Jutes and Vikings. As a result, when the Normans arrived, English people spoke a nice mix of all this, with a strong Germanic influence: bingo! By the way, 1066: it is the year that Guillaume 1st of England became kind and this event marked the beginning of intricate relationships between England and Normandy.

The French will not come out unscathed from this time either, because in contact with our friends, the English, the Normans (merry mix of Picard, Walloon and the Langue d’Oil) become “Anglo-Norman”.

The rest of the story will significantly change that. Yes, the 100 years war (1337-1453) between France and England, did not create links conducive to voluntary cultural exchange between enemy nations, and French was considered the language of the enemy. It was also at this time that Henry IV came to the throne, with the distinction of being the first English King to have English as his mother tongue.

In 1635 that Richelieu created the French Academy. Photo by vallee-du-ciron.com.

It was not until the Renaissance and the Enlightenment that French was acclaimed. These periods contribute to the political, literary and artistic prestige of the French language. It is also in 1635 that Richelieu created the French Academy, which considers French as the language of culture, and intellectuals in Europe. 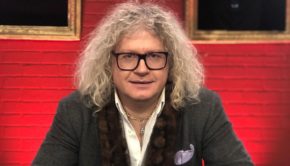