"To me, Jeff Koons has no..." /> Jeff Koons or The Pompidou Controversy – French Quarter Magazine

Jeff Koons or The Pompidou Controversy

“To me, Jeff Koons has no more to do with Duchamp than with Bernini or Praxiteles… Koons’ boasts are nearly the exact opposite of Duchamp’s restraint. He saw art to be an “addictive drug” Koons’ inflated memories are exactly what Duchamp wanted to warn against: the super-addictive drug for the super-rich. “Woe to Koons Art” Jed Pearl, New York Review of Books.

The Pompidou Center grants for the first time a retrospective look at the American artist Jeff Koons. This European premier is drawing attention to this very controversial art. I was fortunate to attend the Matinale de France Culture on the 27th of November by Marc Voinchet which was held in the hall of the Art Center. In addition to Jeff Koons, invited for the occasion to talk about his work, were present the editor of Fine Arts Magazine, Fabrice Bousteau, Alain Seban, the President of the Georges Pompidou Center since 2007, as well as the usual columnists of the Matinale such as Brice Couturier.

Jeff Koons is initially an artist with an unusual background. A broker by training, he evolves in the corridors of Wall Street before turning completely to artistic production. This fact is not devoid of interest, and earned him a number of nicknames. Jean Clair in his essay on contemporary art The Winter of Culture called him “Jeff Koons this trader.”
The art group which he heads is also subject to debate: does the artist create each piece of his work himself, or does he delegate the entire production to his team ?
Marc Voinchet questions the validity of the artist’s name, “Koons,” which is strangely close to the German word “Kunst” meaning art. Would the artist have an intrinsic link with the world of art to which he in fact belongs? Does this semantic link make him an artist by nature?

All these questions invite us to immerse ourselves in the world of Koons to try to define its contours and understand the discourse he defends. 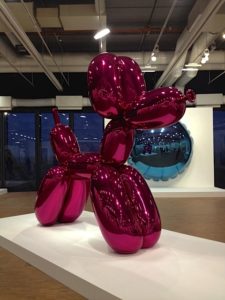 The first intriguing point seems to be the value given to the works of Koons. The editor of Beaux Arts Magazine, Fabrice Bousteau, questions Jeff Koons about this. Citing a work of Courbet, that the American artist recently acquired for the “modest” sum of two million euros, the writer denounces the price of Baloon dog, the most famous work of Jeff Koons, which amounts to 56 million Euros. The monetary value of a Baloon dog, is it greater than that of a Courbet, grand master of the nineteenth century, and the father of French painting ? This question is the first major critique launched at Jeff Koons, which brings back his past as a trader. Questioning the value of a piece of work is to ask the fundamental question “What is Art? “. The American artist answers this interrogation in his own way, saying the value of a work lies not in its price, but in the references which it weaves with the masters of painting.

The notion of value then doesn’t end with the monetary aspect of the Koons’ works, it also means the placement of his work in the pantheon of contemporary art as evidenced in Koons’ response. Again, the Matinale de France Culture evokes this. The retrospective look at Jeff Koons at the Pompidou coincides with the Marcel Duchamp exhibition. The controversy of the two artists, and the ready-made nature of their work brings the visitor to question the link Koons weaves with these masters. In addition, the director of Beaubourg compares the number of visitors for the first day of the Jeff Koons exhibition to that of Salvador Dali held in early 2014, claiming that the number of visits is equivalent. 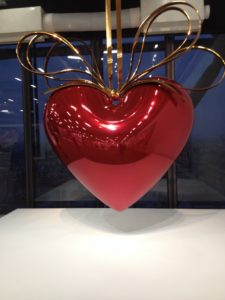 Jeff Koons is so controversial in the world of art, as we have just seen, and the retrospective given by the Pompidou Center has caused a lot of ink. Brice Couturier, in his column, cites the article “Koons, Unfortunately for Art,” appeared in the New York review of Books, Jed Pearl. The artist describes this exhibition as a “perfect storm”, at the center of which there is always a “perfect void”. For him, all that is happening around Jeff Koons could qualify as a void- right up to the work itself.

A final piece to evoke in the works of Koons is this ability to shake up the rules and genres and make something new out of it again. We remember the exhibition of his works in the Palace of Versailles in 2008 that had already created controversy. It is the combination of the “king of neo-pop, kitsch” as they nicknamed the Court of the Sun King that many purists of the art had not supported. We find this combination of new and « nouveau » in the exhibition room “Antiquity” featuring reproductions of ancient statues, still inoxidized steel, mixing Greek myth with new materials from the twentieth century.

What seems important then is to react, to question, while pushing frontiers and the definition of art. Mission accomplished. Whether you are an amateur or a refractory, I invite you to take a trip to the Pompidou Center. Between daliennes lobster with mustaches, Popey or Michael Jackson and his monkey, you will find something that will surprise you, amuse you or cause you to wonder…