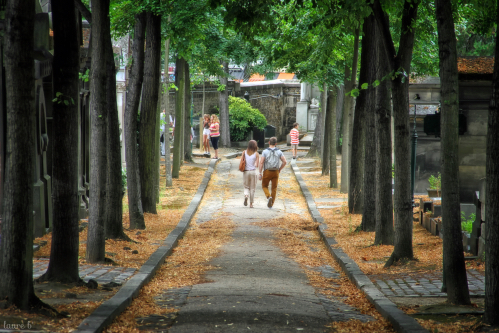 While visiting Paris last spring, on my list of places to visit was Père Lachaise Cemetery. I knew this cemetery was famous, but I didn’t know why. All I knew was that Edith Piaf and Jim Morrison were buried there, and that the cemetery draws many visitors as a tourist attraction. I have always understood it to be a popular tourist destination, but never understood why. I spent a few hours walking this large, ornate cemetery, pondering the names of people buried there, each with their own history of life that had come to rest in this garden cemetery in the southeast of Paris.

Père Lachaise Cemetery is named after Père François de la Chaise. Assuming this was a Catholic cemetery, as it is in a large Catholic country, I was fascinated to find that François de la Chaise was a Jesuit priest. Not purely Roman Catholic, but a separate order of the Roman Catholic Church, that at the time was intent on religious innovations to the traditional church. He was the confessor (the man who heard the confessions) of King Louis XIV of France. Being close to the crown brought the priest his own level of stature and rank among the people and the church.

As the confessor of King Louis XIV, Père la Chaise joined alliances with Madame de Maintenon, (the second wife of King Louis XIV), to encourage the end of the king’s affair with his mistress, Madame de Montespan, with whom he had seven children. Madame de Montespan was referred to as the true Queen of France due to her ability to influence the king in royal and political matters. Having successfully separated the pair, Madame de Maintenon was restored to her proper ruling place beside the king. For this, she rewarded Pere de la Chaise with her support.

Père François de la Chaise was largely responsible for the revocation of the Edict of Nantes which promoted civil unity and also gave Calvinist Protestants (Huguenots) increasing rights in a mostly Catholic country. It also helped end the religious wars that were occurring at the time. The revocation of this Edict declared Protestantism illegal with the Edict of Fontainebleau. It is clear, through this action, that Père François de la Chaise remained a strong proponent of Catholicism.

Père François de la Chaise died in 1709; he had lived in a Jesuit house that was outside the boundaries of Paris at the time. Almost a hundred years later, in 1804, Napoleon established a cemetery near that same house and enlisted Alexandre Theodore Brongniart to methodically create and arrange the cemetery as no other. Pere Lachaise Cemetery is noted as being the first garden cemetery. Most cemeteries at the time were plots of land next to a church with the grave marked with small headstones or crosses, if anything at all. Pere Lachaise Cemetery has grown to 110 acres with elaborate headstones, structures and mausoleums. You will notice the name change from Pere de la Chaise to Pere Lachaise, however, the current name is still a reference to Pere Francois de la Chaise.

The cemetery opened in May of 1804 and the first person to be laid to rest at the new location was a small child named Adelaide Paillard de Villeneuve. She was the daughter of a bell-boy, fulfilling Napoleon’s decree that “Every citizen has the right to be buried regardless of race or religion” and I assume, social status or wealth. After it was opened for business, the cemetery did not receive many funerals, as it was considered too far from the city. The cemetery had not been blessed by the Catholic Church and no devout Catholic would be buried there and by the end of 1804, only 13 graves existed.

In an effort to entice more people to bury their dead at the new cemetery, the remains of Jean de La Fontaine and Molière were moved to the Pere Lachaise cemetery. Now that one could rest for eternity very near to the world’s greatest playwright and poet, the status increased being buried at Père Lachaise Cemetery. The scheme worked and by the end of 1812 there were over 833 burials listed. Another marketing strategy in 1817 brought the remains of Pierre Abelard and his beloved Heloise d’Argenteuil to rest at the cemetery. It is tradition for lovers, or single people aching for love, to leave letters at the crypt as a tribute to love, or in hope of finding true love. This second scheme dramatically increased the popularity of being buried at Père Lachaise Cemetery and by 1830 there were over 33,000 gravesites on record.

A simple headstone at Pere Lachaise Cemetery is uncommon; as the popularity of the location increased, the competition to outdo one’s neighbor in grandiose, ornate and elaborate final resting structures also increased. Grave markers range from simple box, stone or marble coffin-style tombs to large, ornate and complex statues, structures and housings. 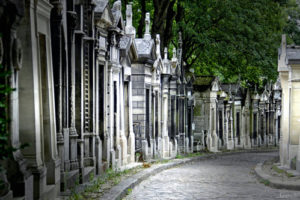 The cemetery expanded five times over the course of 25 years. Today there are over 1 million people buried there. This does not include the many additional burials for cremation housed in the columbarium.

A few of the famous residents of the Père Lachaise Cemetery consist of Edith Piaf, Modigliani, and Paul-Jacques-Aime Baudry to name a few. The list is endless.

More than just a cemetery, it is a gathering of some of the world’s greatest contributing individuals. If the burial registry were a party guest list, it would be the social event of the centuries.