I must confess a thing which only a Parisian of very long date can confess to anybody: I like walking “des Vertus” street up and down. I find that reassuring. I feel better. There would be a kind of an aura in this street; radiations or a special flavour which would make you become good, generous, altruistic, compassionate, all fellings that are not natural at all. 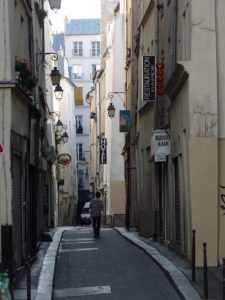 I like walking it in order to let the “ Virtues” of this street penetrate me. Of course the street has inevitably a lot of these virtues: it is “des Vertues” street, isn’t it? My walk doesn’t suppose an immense effort. Anyway it is not a very long walk, as precisely the “des Vertus street” hardly measures 2 traditional acres, (knowing that an acre based on 200 feet of King is approximately 70 meters long. Therefore, we can deduct that “Des Virtues” street is no more than 150 meters long). As a Small-sized street, it is it not only a matter of brevity but also a matter of narrowness. It’s width varies from 5 to 8 meters according to the place where the measure is taken. One might as well say that a car driver and especially a truck driver should carefully calculate their trajectory. Both say that a pedestrian can hardly expect wide protective pavements. By place, he will have to content himself with 15 or 20 centimetres!

There is also one reason why I like the “des Vertus” street. Every time I cross it on my way, it brought me some funny thoughts on Mankind. I wonder. I wonder which unconsciousness; thoughtlessness or casualness had made it possible to rig out this small piece of a street in the beautiful name of “Virtue”.

The virtue for a Parisian would appear under the species of a narrow passage, lined with more or less blind facades, dangerous for the one who is having a walk and away from any natural light. It is so narrow and so badly directed as the beams of the sun have to perform a lot of effort to make a way there. The “des Vertus” street, when evening has fallen or in winter when the night comes very early, looks like what was named in the ancient Paris a cutthroat street. Do you realise that it shows to be more baleful and disturbing than any of the medieval “Vide-Gousset” street. A street where there were lot of thieves keen at robbing what is in your fob!

Anyway, let’s get down to the facts and in the history of this street: the “des Vertus” street (Paris 3rd district) was already known in 1546. It belongs to one of the oldest districts of Paris, “Le Marais”, today the district of the “Arts et Métiers” which is a part of the 3rd district.

Why is this small street called “Des Vertus”? In 1775, an author named Jaillot asserted not having been able to find any “lights on the origin nor on the etymology of the name of this street “. A little later, it seems possible that its name sends back to the three virtues of the Christian theology. Those who impose upon men faithful to God, that is the faith, the hope and the charity (not to confuse with the cardinal virtues: caution, total abstinence, strength and justice. The first ones are related to God, the seconds to the individuals between them).

Is it necessary to think of its closeness with regard to a religious institution named “Notre-Dame des Vertus”? All the more, we could think at this latter opportunity as the barrier which in the old times was separating this part of Paris from the surroundings villages was named the ” des Vertus” barrier.

Hardly has a thought been given to the “platonic core principles” the faithful, the beautiful and the good”, that here come and mix up the dirty-minded ideas and the “small virtues” which make people go away humming with Offenbach in her famous operetta “La belle Hélène»: “Tell Me, Venus, which pleasure do you find to make so the virtue cascading.”

Other authors, Félix and Louis Lazare, proposed that the name of the street, far from taking root in the theological or cardinal virtues, came from the presence of women” who did not make profession of very fierce virtues.” It would be thus rather a “Petites Vertus ” street (a street for debauchery), than a street of noble virtues, those that lead you to God. 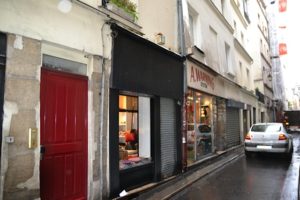 The buildings which line the street were for a long time “seasonal hotels”, where came to live for weeks or months a workforce renting its services in the craftsmen shops with which the district was very widely endowed. There were people of any origins, from French seasonal workers, leaving the countryside to go to the “Capitale” and sell their arms and their skills in buildingship, locksmithery, luggage manufactures, to Chinese who were coming in France in order to settle down.

The street has remained practically unchanged since the 17th century, except some public constructions at the end of the 19th century and a more recent building. In “des Vertus” street, there are not any elegant mansions in the “Marais” style, but buildings with wooden structure and in cobs, adobe walls or rubble stones under filler. They stay as they can, subsiding, settling and taking the traditional aspect of the very old buildings in Paris: when they do not appear to collapse on the side, they give the feeling that with age they have been taking belly.