This side street runs from 88 de Tocqueville Street to 107 de Saussure Street. It is not a very long street, as a matter of fact: 212 meters. Its width is hardly sufficient so that a truck can manoeuvre since, with sidewalks included, it spans less than 12 meters.

It was opened in 1840 overlooking Asnières Road which later on became « de Tocqueville » Street (named for A. De Tocqueville, the famous author of « Democracy in America »). Before it had been changed into a « Parisian » street, this « La Félicité » street, rather an alley or a lane than a street, belonged to the former town of Batignolles. The latter was administratively annexed in Paris under Napoleon III, in 1860 and established as a part of the XVIIth arrondissement (district).

It is said that its name would have been attributed by a Land-owner whose last name nevertheless was not Félicité! Maybe, as the district was developing very fast, this man had carried out many successful property deals. As other businessmen used to name their mansions or their yachts, ” first profit “, he might have made his happiness known by naming this side street ” la Félicité »! However, we do not know much about this point of Parisian history.

What a curious idea to begin the description of the “moral and virtuous” streets of Paris with La Félicité Street. Or, on the contrary, is it not a good idea to lean on a beautiful virtue in order to celebrate this beginning? « La Félicité » in French comes from « Felicitas” a Latin word taken back as it stands in standard French. The modern French people use it less and less, unlike their ancestors in the 19th century and before.

La Félicité means the “perfect happiness”. It can be about senses, about love, about pleasure in the plainest meaning of the term. But, « La Félicité » also relates to loving feelings, to the pure joys of the soul.

To illustrate them, let us quote Chateaubriand who brings down René in ecstasy in his famous novel, « Atala and René »: ” What a « Félicité » it was, when I was once again in solitude with Atala, with Atala my liberator, with Atala who gave herself to me forever! »

Nowadays, « La Félicité » seems to give off too much of a religious or sentimental spirit. It would express delicate feelings. Maybe we are living in a universe too tough to make no room for any “Félicité”?

But one must also remember that « la Félicité » is a feminine first name. We do not count the Christian « Félicité », Félicité de Padoue, of Rome and Carthage. The latter two were both martyrs in Roman times. As a first name, « Félicité » was popular among traditional catholic families in the 19th century but grew old-fashioned in the 20th century.

At this stage, let us go back to my motto: neither the virtue named “Félicité”, nor the charm of it as a first name, led me to begin the description of “Paris-la-morale” with this « la Félicité » street!

I chose it for a quite personal reason.

I was born and I lived for 25 years in a building located on «de Tocqueville » Street, in the very close vicinity of its crossing with « La Félicité » Street. As a child, I was committed to a mission: fetch the milk in an aluminum can, from the dairy shop located at the very beginning of « la Félicité » Street. 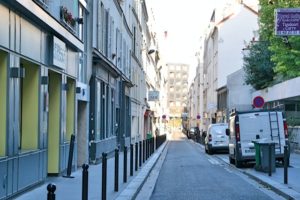 An important mission indeed! Milk at that time was not considered a carrier of cancer risks yet. It was delivered to children so that they would grow up healthily with a sufficient dose of calcium. Of course, the milkmaid knew me. I was the young boy coming in with his milk can. Once in the shop, I had only a single thing to do: wait for my turn. While waiting, I watched the milkmaid and her husband coming and going, the ladle which they plunged into a cooled container, full of milk that they poured carefully in a customer’s can, taking care that not a single drop would spill. And there was the cream also which was poured, more slowly, white, pure, sweet, into a jar brought by another customer.

And the butter cut by means of a wooden spatula or a cheese wire (in France, when we want to say that somebody is not very cunning, we say that he would have been hardly capable of inventing the cheese wire!). The slab of butter resembling a sugar loaf diminished quickly. The war and its limitations were not far away. People were compensating for the years of hardship. Never mind the cholesterol (which they did not yet know about): people loved cooking with butter.

Then it was my turn. I held out my can. The milkmaid filled it. I went back home. My mother would pay for the milk at the end of the month.
« La Félicité » Street was a kind of ugly duckling in the world of the XVIIth district’s beautiful streets. « De Tocqueville » Street very close by displayed its beautiful « Haussmann » facades, its stone buildings, black with soot because the time for the whitening of Paris had not come yet.
Other streets, parallel to « la Félicité » Street were built in the same « elegant » spirit. There were also townhouses, « hôtels particuliers », in the spirit of the late 19th century. Some buildings were of “art deco” style. But, on « la Félicité » Street. there was nothing of that! Constructions were modest.

Still some buildings with wooden framework. cinderblocks, and not from cut stone. Lopsided buildings not very well stabilized. There were lot of small, uninteresting two- or three-story structures designed for laborers’ and storekeepers’ residences.
This was one of these streets, which were numerous in Paris, where carpenters, locksmiths, plasterers, and painters lived and worked. On the second floor, above the shops there were small apartments to accommodate shopkeepers and their families. In backyards badly covered with disjointed cobblestones, stood wooden sheds. Just a step from « la bourgeoisie » world this was the Parisian world of modest people, the world of laborers and small businesses.

In sixty years, « La Félicité » Street has not changed much. The buildings which line it are still crooked, built of cinderblocks on a wooden frame. Facades have been renovated. Everything there is nice and clean. There are still some craftsmen. Not many. These businesses either gradually disappeared or were relegated farther to the suburbs. Today there are two or three restaurants, a small hotel, some workshops, a carpenter still keeps his shop there. Nothing more. The street is not at all busy which makes it hard for any business to flourish! My dairy shop disappeared a long time ago.
A very modern building was built in the 1970s. Much too « modern » maybe, covered with glass, metal, with terraces, balconies and greenery. Sometimes, I have the feeling that it was built on this tiny and very ordinary street so that it would not disfigure the beautiful set of cut stone buildings located on the surrounding streets! 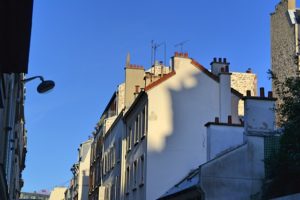 A peripheral change has modified the environment of this little street: starting from the crossing with « de Tocqueville » Street, « la Félicité » Street, led to an empty space at the other end: the trench of the railroad called « la petite ceinture » that ran around Paris (today this railroad is disused); beyond the railroad trench spread out a gigantic marshalling yard. In the past decade, everything has changed. The empty space has been filled. At the end of « la Félicité » Street, the 21st century has just arrived; nowadays beautiful modern buildings line the horizon.

One Response to “La Félicité” street in Paris