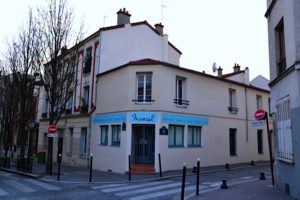 Here is again this paradox which we meet very frequently in Paris: the more the virtues are of an essential order, the less the streets which bear their names are blazing. L’Espérance (Hope) is one of the cardinal virtues. “L’Espérance” street, is nothing less than “cardinal !”

It is one charming side street among the other side streets of Paris. Maybe its charm is a little bit more sophisticated than that of the other “virtuous” streets: while Des Vertus street, is narrow, dark and rather sinister in bad weather (yet we know for sure that virtues cannot be neither dark, bad or sinister!) and similarly, while Félicité street, is hardly pleasant, Espérance street, would look like almost cheerful. 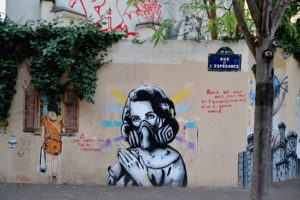 Before giving some explanation, let us go back on the origins of that “Espérance”street. First of all, an important point for history and geography, it is necessary to remember that Paris as Rome contains 7 hills among which one is named “the Cailles Hillock” (la Butte aux Cailles) of the name of a Mister Caille who was the owner of this hillock in the middle of the XVIth century. “Butte aux Cailles” thus should not be translated in “Quails Hillock”! (the French “caille” is the name of the British bird “quail”) Nobody would have been hunting quails in this part of Paris, the “Cailles Hillock”. (Nor in any other part).

Situated on the left bank of the Seine River, the word “Hullock” fits: “la Butte aux Cailles” does not rise very high: 63 meters over the sea level. Our “Espérance” street, belongs to this hullock which it allows to climb by the South. Before being integrated in the City of Paris in 1860, this street was on the municipality of Gentilly territory under the name of “path of Butte-aux-Cailles.”

If there is charm, it is due to a characteristic of all the streets on the “Cailles Hullock”: it is a hill of gypseous limestone. It is in the abundance of this material extracted from the ground in its immediate environment that old Paris, called afterwards “Haussmann Paris”, has got this peculiarity of being a city where buildings made of stones dominate. The stone extracted from the “Cailles Hullock” mines was very favoured: a little bit creamy and white, fine, solid, easy to sculpture, it was produced in abundance. Quarries being subterranean, they were dug by multiple tunnels and cavities, leaving hollows almost everywhere inside the ground of the hill. Some were so vast as one would have been able to settle Notre-Dame de Paris there. Once abandoned for lack of gypsum to be extracted, the “Cailles Hullock” became a curiosity with so much space left underground as the on-surface construction became particularly risky.

Before any construction proceedings, in a first stage, one should closely surveyed what was below the real estate project ground. If empty spaces were discovered, (very frequent), it was mandatory to either fill them or to take up pillars or pickets to support the future building.  This is why Cailles hullock district is so characterized by an abundance of small two or three-storeyed buildings and or small houses. 5 or 6-storeyed traditional urban buildings are not frequent in this area.

It gives to “Espérance” street, lined with these small houses or with low buildings, a very human character, very “village” as we like saying in Paris. And today still, we speak about the village of the “Caille Hullock” in the same way we would speak about the village of Montmartre. The sky stands out there generously and gives to the street and to all those who adjoin it the cheerful aspect which we evoked higher.

All these explanations do not say why it is called “Espérance” street, instead of having kept its previous name of “Cailles hillock path”. Is it necessary to think that because there was (and always is) a street of the Cailles Hullock? It would have led somebody to remark that it would be sensible not to create confusion, hence to change the name? Unless, is it a legacy of history? the Cailles Hullock having been the place of one of the battles which marked the 1871 French civil war which took place mainly in Paris. The Espérance street, ends up in the “Commune de Paris” place which embodied the revolt of Paris. Would its name evoke the Hope for a better world, this hope which carried the Parisian revolutionaries (named “les Fédérés) to defend the hill against an enemy very superior in number? 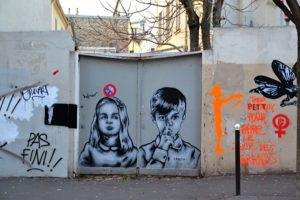 Either is it simply necessary to think to a landowner proud of his wife and who would have wanted to honor her by attributing her first name “Espérance” to a part of the way lining its properties? It would not be surprising: two streets nearby the Espérance street, still bear the name of the owners of surroundings estates, Buot and Alphand street, the same for the very long Barrault street, and, a little farther, the Boiton passage. Farther, Pouy street, sends back to the second name of another landowner’s wife.
To increase the mystery, it is necessary to walk along Espérance street, toward a crossing that shows to be a little bit surprising! In its first third part, going back up towards the Commune de Paris place, Espérance street crosses Providence street,! Is it necessary to see a sign there? Is it about a pure coincidence? We shall discuss it when it will be question of this street.

In the meantime, let us evoke a text, which mentions the Espérance street It is extracted from a local newspaper, dedicated to the 13th district of Paris and called ” the 13rd of the Month “. In a special release it said the nefarious reputation of the district, which has remained a real village away from the big urban restructurings: there, for a long time, it said, lived or forged ” bad boys with guns “. We can read this anecdote written in 1978 told by a young Moroccan student, Abdel Ajenoui: ” I pass in front of a bar, a chap runs out. Behind him, a man of about fifty years throws himself in his pursuit and scolds him, gun in the hand. He fires twice, I see the impacts on the wall. The young chap succeeds finally in turning into Espérance street. At least this time, he went out there.”

“But really, continued the newspaper, the Cailles hillock is not a place renowned for its gangsters. “