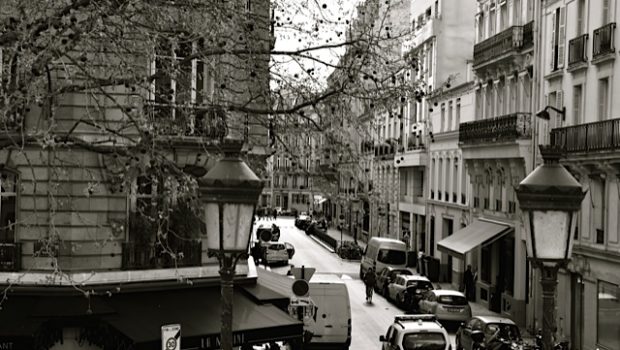 Dieu Street in the District X in Paris

In various monographs on the Virtuous and Moral streets of Paris we discovered to what extent the Parisians were sensitive to kindness, fidelity, peace and joy while remaining a little bit distant. Virtues Street, as it was pointed out, shows no luster and no greatness. Its architecture is mediocre, its buildings are banal and even the size of the street is far from being in accordance with its name: this street which claims to gather under its banner not one particular virtue but all the Virtues pales in comparison with other streets carrying less prestigious titles. Even Bank Street is better endowed. 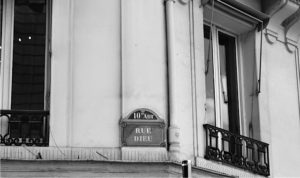 We also saw that beyond the simple virtues, the Parisians wanted to honour God. We also showed that this very strange ideological audacity, in a country which prides itself on its anticlericalism and defines itself stubbornly as “secular” had been compensated for: God’s Passage is situated very close to Satan’s Cul de Sac.

Don’t think you’ll get off that lightly! We do not give up God in the sad Passage where we left him. The Parisians reiterated their attachment to him by awarding him a street. It is better than a passage or a cul-de-sac. In the hierarchy of the Parisian roads, the status of “street” is much higher than passage, cul-de-sac, path, park, or drive… Awarding a street to God is not a mark of an aggressive anticlericalism, nor a way to despise him. However on the other hand, above “streets” we have “Boulevard” and “Avenue”. Thus, at first glance, it seems the Parisians were careful not to hold up the name of the supreme divinity too high.

At first sight? If you held onto this “first glance” you have been deceived because God Street does not honour the God of religion any more than God Passage which, as you know, received its name from the owner of surrounding grounds!

God Street, which is situated in District X of Paris, owes its name to General Dieu , so this military term is not a convoluted way to evoke God’s supremacy. General Dieu was a real serviceman who existed in flesh and bone, with sabre and uniform and medals of all kinds! So let’s forget “God street” and continue with “Dieu Street”!

This street received the name of the General by decree on March 2nd, 1867. It was opened by the Company of Warehouses. It extends to the Saint Martin canal and changes names after having crossed it. It is 130 m in length and 12 m wide. 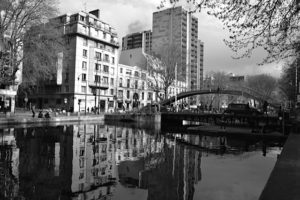 It does not present any particular charm except its environment: it is perpendicular to the Saint Martin canal and ends with the bridge which crosses over the latter. By itself this bridge presents a common point with most of the bridges which cross over canals in Paris: at the beginning, an iron bridge, which jumps over the canal, destined for the pedestrian crossing. Then, next to this bridge, a second one which allows for car traffic. The street is not far from the locks which regulate the flow and height of the water. All this equipment dates back to the XIXth century and corresponds to a period when the surroundings, a zone which we name the Saint-Martin faubourg, was very industrious.

For proof that this is a “military” street, the quays which line the Saint Martin canal at the level of Dieu Street, bear French names of great victories of the French Revolution against the armies of European kings: Jemmapes and Valmy.

Around the Saint Martin canal, and along its banks, nowadays, are walks shaded by beautiful trees. The wrought iron and cast iron of the XIXth century are painted in green and done up like new regularly. Dieu Street is just a step from Republic Square and its environment of bourgeois buildings and commercial buildings built for the most part between the end of the XVIIIth century and the beginning of the XXth. Today the small businesses and the artisans have been replaced by service companies and resident people whom, in France, we call the “bobos” (BOurgeois – BOhèmes) (middle class urban people and stylish people in the Bohème mindset) who settled here in great numbers. Formerly inhabited by workers, the Dieu Street area became “Posh”.

Dieu Street indeed presents an originality which, in my opinion, compensates for its total banality.

It is necessary to return to the origin of the name: General Dieu is one of these uncountable French generals who honored the French army. He died young, in 1859, at the age of 47, a member of this category of superior officers who, rather than remain behind the troops to direct them, preferred to put themselves at the forefront, to lead by example, show the way and bring them to victory.

All the armies of the world had some of these leaders who risked their lives in the fight such Leonidas at Thermopylae. The French pupils shivered at Henri IV’s call to his soldiers during the battle of Ivry: ” follow my white panache “. They are still moved by the courage of General Bonaparte taking the lead of his troops on the Pont d’Arcole. It was exactly the same for General Charles-Prosper Dieu, who was at the head of a brigade of the French imperial army during the wars which drove the reunification of Italy. During the battle of Solferino, as he led his infantrymen to the fight, he was gravely injured. A short time later, he died from his wounds.

France has always been grateful to these brave men. General Dieu was unquestionably brave. Awarding him a street was only fair. Nevertheless, in practice, this attribution came along with a curious anomaly: the street is not called “General Dieu Street”. This is all the more strange as there no streets named in honour of French or foreign Generals (the French people have this weakness to think that courage is a virtue that transcends borders) that forget to mention the military title of the hero. Numerous streets of Paris are dedicated to senior military personnel and all of them include both the name and the title. This is the way Paris “made” General Eisenhower Avenue and General Patton Square, to cite some to American examples.

General Dieu did not have this posthumous privilege. We forgot his title! Although streets and avenues recall Lieutenant X, Admiral Y, and Sergeant Z, God Street, does not remind us that Charles-Prosper Dieu was a General. It does not even mention his first names, Charles Prosper. There is another case as strange: that of Simon Bolivar who received the honour of a Parisian street without any mention that he was General. Maybe the Parisians preferred his status as a politician and revolutionary rather than his military status?

We say nevertheless, that a plaque displayed on Dieu Street reminds us of the General’s honorable behaviour during the battle of Solferino.

Has it diminished with years? I am not too sure. It has nevertheless left a question which does not seem to me resolved amongst all these peculiarities: why did we want to honor the memory of this unknown general? Is it an initiative of the Company of Warehouses? Did the Dieu family have an interest in this company? Another issue should be raised: it was not a very long time after he died, 7 years, that the obscure General had been attributed a street by his name.

Was it a secret initiative of the Turks so that we would remember a General who was, during the Balkan Wars, attached to general-in-chief of the Ottoman army.

“History does not repeat itself,” said a philosopher, “it grimaces.” Furthermore, Dieu Street had simply been forgotten in the map of Paris which makes a reference: the Ponchet Map 1999 edition. We have since found it: it is mentioned in the 2008 edition.