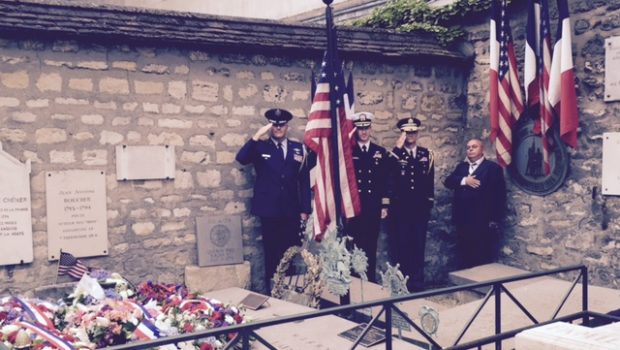 Published on July 4th, 2016 | by Isabelle Karamooz, Founder of FQM 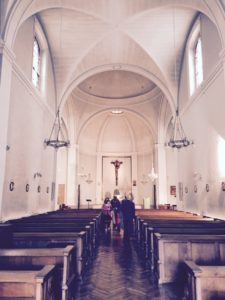 Inside of the Chapel. Photo by Isabelle Karamooz.

I think it is one of the magic places in Paris and one of its best secrets. Picpus is unique for several reasons, and one which more Americans should be aware of : it is the burial site for General Marquis de Lafayette, one of the true heroes of the American Revolution. It is remarkable not only for its grisly history, but also for the fact that men and women, adults and children, commoners and aristocrats all reside in the same grave. Their names are recorded on the walls of the small convent chapel at the entrance of the cemetery.

I was fortunate and privileged to receive a special invitation to the annual Fourth of July ceremony from the Sons of the American Revolution in France, and are very grateful to have been included in as memorable a 4th of July as we could have imagined. Special thanks to my dear friend and historian Patrick Villiers.

This year, however, this private ceremony was scheduled exceptionally in June 30th and attended by a considerable number of American and French visitors, along with a substantial French military presence, many French dignitaries, and Jane Hartley, the American Ambassador to France despite the uncertain weather. We were there to pay homage to the contribution of the Marquis de La Fayette to the American War of Independence against the British. 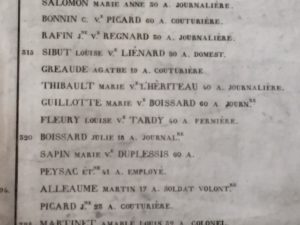 A closeup of the wall listing the victims of the terror. As you can see, it also has their age and occupation, if known. Photo by Isabelle Karamooz.

The ceremony began in the courtyard of the small chapel where Ambassador Hartley, precisely on schedule, was the last to arrive. From the courtyard, the band, the Ambassador, military representatives of both France and the U.S., and the little crowd, including me, marched a distance of approximately 100 yards through a beautiful tree-shaded lawn to a small cemetery enclosed by a wall in the far right corner of the small park. The La Fayette graves, where General Lafayette, his wife Adrienne de Noailles, and his son George Washington Lafayette are buried, are in a corner of the cemetery, enclosed by a low gate. 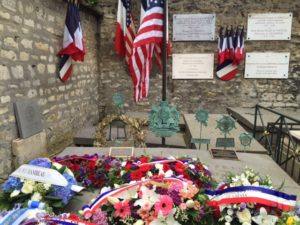 The La Fayette graves, where General Lafayette, his wife Adrienne de Noailles, and his son George Washington Lafayette are buried, are in a corner of the cemetery, enclosed by a low gate. General Lafayette helped in the American Revolution and had dirt from Bunker Hill put on his grave when he died. Photo by Isabelle Karamooz.

Ambassador Hartley stood at attention as the French military band played the Marseillaise, the French national anthem and then the Star Spangled Banner, both very moving as perhaps only military bands can be. The ceremony continues with the annual formal exchange of the American flag, which has flown over the gravesite for many years, including the period of the Nazi occupation of Paris in WWII. The flag which had flown for a year was lowered from the flagpole and carefully folded into the required triangle. A new flag was raised in its place. At this point, the French military band again played the Star Spangled Banner. All of the U.S. military saluted, other Americans placed their hands over their hearts, and the French military also saluted. America is indeed indebted to France for its assistance in the War of Independence, and the French are indebted to Americans for the assistance in both of the 20th century’s world wars. Each country does well when they remember the assistance rendered by the other. 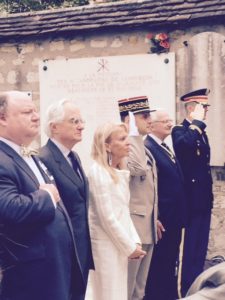 A considerable number of American and French visitors, along with a substantial French military presence, many French dignitaries, and Jane Hartley, the American Ambassador to France attended the ceremony. Photo by Isabelle Karamooz.

Before leaving the ceremony, I stepped inside the small chapel (you pass it on your way in) and went to the far end, and on either side of the nave are two enormous plaques bearing the names, ages, occupations and date of death for each of the 1,306 people interred in the mass graves. Commoners and nobles alike suffered the same fate and now rest together.

For those who would like to visit the Picpus Cemetery. The cemetery hours are erratic and often unpredictable. Generally, Picpus is open Tuesday-Sunday, often from 2-6, mid-April to August. From October to mid-April it is open 2-4.
It is closed on holidays, Mondays, and in September, and for the US Fourth of July celebration. I would recommend to call before a visit at 01 43 44 18 54.

One Response to Fourth of July Ceremony at Picpus Cemetery!