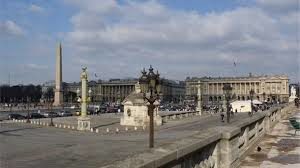 Situated at the foot of the Champs-Elysées, at the end of Royale Street on the north (rue Royale) and at the end of the Rivoli Street on the east, Place de la Concorde goes along the Seine between the Court of the Queen (le Cours de la Reine) and the quay of the Tuileries. It forms a rectangle (360 meters by 210) and it is mentioned in the international rankings for a surface area of 86,000 m2. Of course, everybody knows Place de la Concorde!

From this square, there is a sublime view on the avenue of the Champs-Elysées up to the Place de l’Etoile and even up to the towers of La Defense there. By turning your back on them, you can see the Tuileries Garden and the Louvre Palace. By considering the Seine, we are in front of the French National Assembly Palace, a kind of Greek or Roman temple. By turning your back on it, you will find Royal Street and Madeleine Church, designed in a Greek or Roman temple style. From the square we perceive the canopy of the Grand Palais and the roofs of the Petit Palais. Leaning against the quays of the Courts of the Queen, we admire the Eiffel Tower. From La Concorde bridge, there is a delight of bridges and monuments.

In Paris, the Place de la Concorde is a universe apart; it speaks about architecture, politics, art, town planning, fights, famous deaths and ravaged fates. And yet, it is very young compared to the set of monuments and squares of Paris. It did not appear until the reign of Louis XV, when the architect Gabriel launched the works. Up to this time, it was but the end of the Tuileries Garden, a defensive glacis, accessible via a footbridge named “the swing bridge” (le Pont tournant) over the ditch which surrounded it. 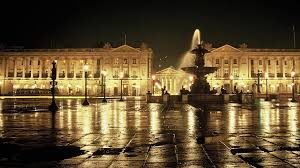 The square is a real symbol of the modern urbanization such as it was launched  under the auspices of King Louis XV and to honour him. The big cities of France were so endowed with big squares serving to emphasize the monumental statues of the king, nicknamed the Beloved (at the beginning of his reign!). The representatives of the city of Paris wanting to celebrate the cure of King Louis after a serious disease, decided to set up an equestrian statue which would decorate the centre of a new square on which new streets leading to the square would end up, namely the “rue Royale” (Royal Street) which today joins Madeleine Church to the Place de la Concorde and Rivoli Street. The statue was the work of Bouchardon. It did not withstand the French Revolution. The square was drawn, built and supervised by the architect Gabriel. The works were finished in 1763. Gabriel’s initial projects were only very partially executed, but the Place de la Concorde went through ceaseless public works up to the mid- 19th century. In 1844, Place de la Concorde was the location of an experiment of urban electric lighting. The last big arrangements date 1930-32 when Concorde Bridge was widened.

Today, the Place de la Concorde is one of the most crowded crossings amongst the avenues of Paris and the Concorde Bridge is one of the bridges the most used by Parisians. Due to its exceptional size, the square counts among the biggest urban squares of the world. It creates a kind of break between the axis of the Champs-Elysées and the axis of the Tuileries up to the Louvre as Place de l’Étoile creates a break on the axis Paris-La-Défense. Unlike squares that were built in previous years such as Vosges Square (la place des Vosges) or Victory Square (la place des Victoires), conceived as property deals as much as urbanistic, it is not lined by building except for the North of the Square which is bordered by two neo-classic large Mansions of Gabriel’s style. Today, they are under very important renovation works, one of them is occupied by the Hotel Crillon, the other one by the Navy ministry. Bordering the Place de la Concorde, separated from the Hotel Crillon by Boissy D’Anglas Street, is the Embassy of the United States. What blame could it be possible to put on this beautiful square? Regrettably it is overloaded with cars which cross it from north to south and from east to west: should you decide to stand up under the obelisk in the middle of the square, you have to challenge your courage and fearlessness; you are forced to take the risk of crossing a permanent stream of automobiles (even if traffic lights channel it; you are forced to get ready to live for a moment the same life as in the trenches during year 1915 when they were bombarded with poison gases; eventually, you would have to protect your ears because it seems that the equivalent of 10 long-haul aircraft are permanently landing and/or taking off there.

The organization of the Place de la Concorde, its destination, the buildings and its diverse names correspond to many markers of Modern France. If it would not be just to summarize the history of France in Parisian events, it is necessary to recognize that the Place de la Concorde had its part and had to hold its role in difficult circumstances! 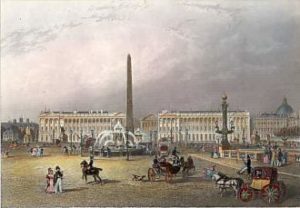 As the “Place Louis XV” first of all, it confronted the French Revolution and was rid of the statue of the Monarch in 1792. The square then became the “square of the Revolution”. At the end of the period of the “revolutionary Terror” in 1795, the “square of the Revolution” was renamed “Place de la Concorde”. The term, we can notice, is more neutral and prudent: the “square of the Revolution” was the Mecca of the revolutionary symbolism, as we shall see it in the lines which follow. Let us stay on the name under which the square is presented. In 1826, King Louis XVIII, brother of Louis XVI decided that in his memory, the Place de la Concorde would be entitled “the square of Louis XVI” and that a statue of the beheaded king would be erected in its midst. The project was lagging behind. Then came the revolution of 1830 which removed Charles X from the throne, brother of Louis XVI and Louis XVIII, definitively brought down the project in the dungeon. The “political” question which transformed the arrangements of the square into a real headache faded away in 1836 with a major and completely apolitical development (according to the standards of this period): the obelisk of Luxor given to France by the Viceroy of Egypt was installed in the very centre of the Place de la Concorde! It was the real chance of a lifetime for the new king, Louis-Philippe who, however, waited that the people of Paris applaud the technical performance of the installation before showing himself onto a balcony dominating the square!

What is it about Politics with this square? It is a fact that it was during the French Revolution times, the Mecca of politics in all its splendor and in all its horror! Regarding splendor, we shall be brief, the Place de la Concorde is since President Mitterrand the square where is installed the Grandstand of the parade of the French national holiday on the 14th of July. Regarding horror, the Place de la Concorde was a square where the guillotine was took place here by means of the guillotine concerned a band of thieves who had managed to steal the jewels of the crown including the famous blue diamond. Then, the guillotine had been taken back to square of the Carousel but was returned to Place de la Concorde for the beheading of Louis XVI, on January 21st, 1793. It would remain there from May, 1793 till June, 1794. More or less 50% of the victims of the Terror would be “treated” there, including Marie-Antoinette, Queen of France, Philippe d’Orléans (cousin of Louis XVI, who, as revolutionary deputy under the name of Philippe-Egalité, had not hesitated to vote for the death of his cousin!) and Danton, one of the revolutionary leaders, an enemy of Robespierre. The last appearance of the guillotine on the Place de la Concorde (which was still called Square of the Revolution), was intended for the execution of Robespierre, on July 28th, 1794. The Place de la Concorde was out of this line of the political business during the revolutions in 1830, then in 1848. On the other hand, in 1934, it was the square where surged a political drama which still marks the political minds in France: a demonstration of the right and the extreme-right having gathered on the square with the idea of “walking on the French National Assembly Palace”, the Republican Guard (Garde Républicaine) on horseback charged the crowd causing 7 deaths and 40 wounded persons.

From an architectural point of view, the square is designed around the obelisk, recently surmounted by a “gilded pyramidion” and two gigantic fountains one representing the oceans, and the other, the rivers. “Matron’s” statues represent some of the main cities of France. That of Strasbourg was saddened until, in 1918, Alsace, annexed by Germany in 1871, returned to France. 20 “rostral columns” and candelabras are also deployed. The sculptures called “horses of Marly” are dominating the access to the Champs-Elysées and match horses above the entrance of the Tuileries Garden. The last big development of the square consisted of the removal of the ditches which framed it.

On its southern part, the square overlooks the Seine and opens the bridge of Concorde. Its construction started in 1788 and was finished in 1791. It changed names as often as the square! Its peculiarity, other than it shows an even more impressive size since the extension of 1930, was to be completely built with stones of the Bastille Castle. When the latter, symbol of the monarchic oppression, was taken by revolutionary fury, its demolition was very fast decided and executed. Stones pulled from the destruction of the castle found themselves in the construction of the bridge “of the Revolution”. A real symbol (that everybody forgot!!!)

This article was proofread in English by Aubrey Wadman Goetsch.