Located in the West of the Distri..." /> Streets in Paris : Paradise Street and Paradise square – French Quarter Magazine

Located in the West of the District 10 of Paris (Porte-Saint-Denis neighborhood), Paradise Street is a long street of 528 meters. 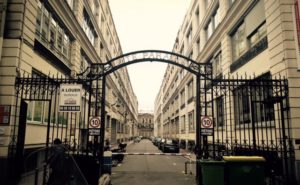 Let us say things straight: Paradise Street does not adjoin God Street (rue Dieu)! To join it we do not cross by God Passage! Hell Passage is some kilometers away on the left bank of the Seine river and Hell Square (which has become Denfert in place of “d’Enfer”) is still farther. Why, by Hell, did they put Paradise Street in this part of Paris, the District 10, not far from the Gare du Nord station, just a step away from Loyalty STREET and Confidence Passage? Which strange underground connections are hidden? How was it possible to drive the city of Paris, in full glory of the Third Republic which was governed by convinced anticlerical politicians, to give such a holy name to this slightly gloomy lane?

Did the Parisians remember sweet memories in it? It is true that the French people like telling the feminine conquests of their kings and presidents. A kind of psychiatric transfer? Yet Paradise street welcomed for a few years the guilty love affairs of the Duke of Orléans nicknamed Philippe Egalité (he gained this nickname from his strong inclination vis à vis the 1789 revolutionaries and he had urged his taste for political changes up to the point he voted for the death of his cousin, King Louis XVI). Would the Parisians have remembered the loving visits of the revolutionary Prince to the small dancer whom he had moved into a charming small house? It is a pretty poor explanation! Besides, this street had not only left such fickle and loose souvenirs: during the night of the 31st August 1814, in the former Ragusa Mansion, number 51, the surrender of Paris was signed. Napoleon, defeated, had left for Sainte Hélène Island.

If memories are lacking to give a proof for this name where is it possible to find reasons to provide this street with “Paradise” name? A beautiful name synonymic of the Eden fields filled with flowers and planted with fruit trees on which the sun is gleaming and is softly warming a generous and welcoming ground.

Nevertheless, this idea of “a welcoming garden” puts us on a track. Maybe the right one? It is necessary to go back for a very long time in the past, when this part of Paris was still rural, where fields and vegetable gardens followed one another, where convent schools prospered, not far from this Babylon that became Paris, not far from an incredible quantity of sins to be made forgiven, of sick men to look for and poor people to take in.

At that time, this street was just a small part of a street which was going around between the West and the North of the city of Paris during the 17th century. It was called “High street of Roule to Saint Lazare”. Saint Lazare? You have already met him. In this place, there were convents, leprosy colonies, and hospitals. One of the heroes of the combat against begging and poverty in Paris, Saint Vincent de Paul, was represented by generously endowed institutions. The nuns had their gardens, a gigantic space of “maraichage” farming there, named “Le clos Saint Lazare.”

Here we are, we got it! In the middle of the 17th century, the street running along the gardens of the Saint Lazare institution was following meadows adjacent to a convent which was welcoming young nuns “the Daughters of God” (les Filles-Dieu).

Have you guessed this time?

How, in the minds of the farmers and the inhabitants of the “capitale” could a street be named which would be stretching along a garden named the “meadow of God’s Daughters” because it was dedicated to nuns who were growing vegetables, fruits and any sorts of good things? It could be only named “a Paradise.” 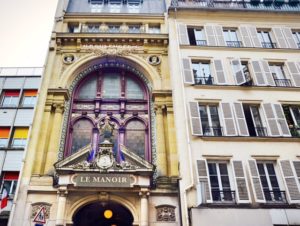 In spite of its idyllic name, Paradise Street did not benefit from a preferential treatment and knew many vicissitudes. There is another about fifty years, it was the “paradise” for the “femmes de bonne compagnie”: it was the STREET of porcelain makers, the faïenciers, the glassworkers and the crystal glass-makers. No beautiful table without Faïences from Choisy-le-Roi. Magnificent head offices were built there including the one that is today occupied by the “Manor house of Paris” with internal walls covered with faïence decorations. The very famous crystal glass-makers Baccarat and Saint-Louis and glassworkers had also buildings there. In the course of the 19th century, these industrialists confide the marketing of their manufacturing to traders of Paradise street. There was also a relay of post for the diligences that were commuting from Paris to the East of France.

Regrettably, industrial revolutions, competition, the decline of the taste for beautiful tables and the fading away of crystal lights have reduced these businesses to nearly nothing. Today Paradise Street scarcely displays a few beautiful products on a very limited scale. 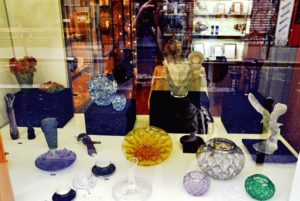 The beautiful head offices were transformed; some of them have become museums. Others were transformed into Theaters. This is how the Haunted Manor house was born. Settled in the former head office of Hippolyte Boulenger Inc. a great Faïence maker of Choisy-le-Roi. A young American living in Paris is at the origin of this project inspired by the show named “The Haunted Houses in Texas” shown in San Antonio and Austin. The idea was adapted for France based on imaginary or real Parisian stories. The last time I stood in front of the Manor House entrance, a troop of teenagers got ready to enter it with cries of fear and enjoyments: horrible zombies made the girls tremble and the boys scream. Not far from there, opens “la Cité du Paradis.” Do not hold your breath and do not wait for a description in the style of the Heavenly Jerusalem: the City of Paradise is established of two private streets which cross in the perpendicular: they are lined with uninteresting buildings dating the end of the XIXth century and the beginning of the 20th. Modern at their time, they were designed to receive stores, workshops, head offices of companies. An industrial and trading park close to the center of Paris.

This estate contains an interesting architectural element: the facade “on courtyard” of a mansion built in 1772 on grounds sold by the convent of the “God’s Daughters”. The facade decorated with frieze and with garlands was hardly mistreated as was frequently the case in Paris when the old elegant districts, having lost their wealthy residents who settled in the new, elegant districts of Saint Germain or Plaine Monceau, became zones of workshops, of small business crafts and trade.

Let us return a few moments to the decidedly worrying character of the Parisians: let us say that Paradise street and the “Faubourg Poissonnière” Street?? were in the continuity. In fact, they were separated by a section of a very short street which was entitled “Blue Street”. What’s the matter with this name, you may ask?

Here is the matter. This Blue Street adjacent to Paradise street was called for a long time “Hell Street !”

This article was proofread by Aubrey Wadman Goetsch.