The Cultural Fortress of France: The Louvre Under Occupation 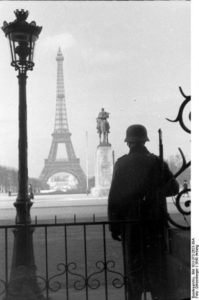 France is a nation of culture and identity. Its beautiful values and rich history are found in the many paintings, sculptures, portraits and other art pieces scattered around the country. The Louvre Museum, the largest in the world of its kind has housed many of France’s precious cultural items in its chambers for hundreds of years. But while France is the home of beauty, romance and light, the European nation has also faced the wraths of evil and darkness, being placed in the center of two deadly world wars. When the “city of lights” fell on June 14th, 1940 to the Nazis, all hope in France seemed to be lost. Hitler appeared to be storming through the continent, leaving a massive path of destruction in his wake. The French were worried that their cultural values would become massed together in a wreck. However, through the bravery of the national government, the monumental aspects of French culture were preserved, the Louvre continued to be a symbol of appreciation for the original arts, and a beacon of rebellious light was shone throughout the nation that had called itself independent and free since the late eighteenth century.

When the Nazis began to invade their surrounding neighbors, beginning on September 1st, 1939, many pieces of art work and literature were burned in their destructive wake. Many artifacts were lost, especially those works of art from the Jewish, Communist and homosexual communities. In the spring of 1940, the Nazi Blitzkrieg machine decided to roll its forces westward by invading the low countries. This was especially dangerous to France, whose fortified Maginot Line proved to be ineffective and pointless. The French people seemed to be doomed, along with their beloved culture. Thankfully, the French government had predicted that war was going to come to the continent in one way or another, and decided to act promptly by packing up France’s most exotic art pieces and shipping them to secluded places in the countryside beginning in 1938. Among these pieces was the famous Mona Lisa, which left the Louvre in August of 1939. By the time September 3rd, 1939 rolled around, the day France officially declared war on Nazi Germany, all important pieces of French art were put in vans and transported across the country. Thanks to the courageous efforts of Jacques Jaujard, the museums of Paris, including the Louvre and other major French cities were evacuated, leaving France to have no art on top of the surface, as their precious artifacts were safely stored below with their liberties.

As the paintings and sculptures of the romantic nation were being sent to the Château de Valençay, Chambord, Louvingy, Montal, and other tranquil places, Hitler closed in around Paris in June of 1940. After the French hopelessly surrendered to their dominating neighbor, the Führer personally took a walk around the capital, admiring how silent the city was. As part of his dream, Hitler wanted to rebuild Europe in the form of a greater Germany, where his people, the Aryan race would enjoy the luxuries of space, plentiful resources, and comfort. In this ambition, the German leader also wanted to show off German artwork and literature. This explains today why Hitler took great interest in architect and co-designing many venues around Berlin, especially when the 1936 Olympics games were played in the German capital city. Hitler now wanted to weave German art into the French heartland and create a prominent display of Aryan talent. In September 1940, he ordered German Field Marshal Gerd von Rundstedt and other German authorities to restore Paris to its normal cultural life and reopen the museums.

The Grande Galerie of the Louvre, empty during the war. Photo courtesy: Twisted Sifter.

The Louvre would endure four harsh years under the occupation of the Germans. In the beginning, the Nazis had a tough time enticing people to visit the museum, as many of the precious artifacts were in hiding and its chambers were empty. The tenure of the museum during the war was basically symbolic; the Nazis wanted to show off their pride and joy in the arts, and had imagined the Louvre as the place to do that. The Nazis even tried to smuggle some of their stolen pieces of artwork into the museum, but the Louvre would continue to remain abandoned for much of the war. Hitler’s dream for a showcase of French-Aryan artwork would never be fulfilled. Instead, as the war wound on, Paris became a heap of rubble due to the allied bombings, and the Louvre, with the beautiful gardens it once had, began to crumble into ashes.

The Mona Lisa returning to the Musée du Louvre after the war, 1945. Photo by google.

In the end, the Louvre was restored to its rightful glory when the allied forces took back France in late 1944. The hidden artwork was once again placed in the chambers, and major restoration efforts were taken to complete the museum by its re-opening date in 1947. As the Louvre enjoys record number of visitors today, its World War II story has largely been wiped from history. Efforts have been made to restore this period of history that is so crucial in balancing French history and culture on the same thread. The story of the German struggle over the occupation of the Louvre was recently made into an historical film. FRANCOFONIA (2015), directed by Alexander Sokurov, depicts the real story of how several Frenchmen saved the Louvre from near-destruction. The picture dives deeper into this forgotten part of French history and displays the importance of how art plays a pivotal role in the creation of a nation’s past and identity.

In happy times the Louvre represented the jewel of French artwork. From the massive sculptures to the smallest of paintings, this building was the heart of French culture, the home of living history. It seemed as if that culture would fall to ashes when the world was bent over backwards fighting a war with the Nazis. But even when the French surrendered their government and personal objections to the Germans in 1940, their hearts and love towards the arts would never die. Their culture would never fade into the abyss, but be kept in secret. Their national identity would be concealed for four long years in the grounds of the countryside, only to wait for the time when evil had abandoned their hollow sacred grounds and when liberty and peace had been restored to the chambers of the Louvre.

This article was translated in French by Alexandre Patron Ricard.