An exceptional place for an exceptional wine. The launch of the Astelia AAA Crystal 2015 cuvee from Les Domaines Paul Mas (Paul Mas Estates) was held on September 23, on the first floor of the most famous of great ladies, in the lounge that bears the name of its brilliant builder, Gustave Eiffel. And this time, eyes did not turn toward the views of the Paris roofs but toward thirty bottles displayed on tall black pedestals. What more beautiful than this setting of iron? Suffice to say that the evening was aerial, conducive to the intoxication of the senses and the pleasure of the eyes. The assumed goal: to promote Paul Mas wines worldwide. 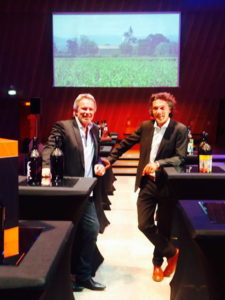 Jean-Claude Mas, founder of Les Domaines Paul Mas, who inherited wine land that has belonged to his family for more than a century, admits with emotion that it is the first time he went up to the iron lady’s balcony. It took wine as a reason for this. The winemaker from Pézenas, passionate about his craftsmanship and viscerally attached to his Languedoc soil since his childhood, just realized the dream of creating a unique pairing: art and wine.

“I am passionate about everything that is the craft of art, everything which gives a true emotion. That is why I wanted to develop a unique bottle on the basis of a drawing” he explains. It all started two years ago when prestigious crystal art manufacturer Daum said yes to the project of creating a crystal bottle for his best cuvee. The chosen vintage will be Astelia AAA 2015 (from his three daughters’ names Astrid, Elisa, Apolline) coming from the best vineyards among the eleven Mas Estates (Château Arrogant Frog, Clos du Moulinas, Clos de Savignac, Domaine du Silène, Mas des Tannes, Château Crès Ricards, Château Teramas Astruc, Château de Martinolles, Domaine de la Ferrandière, Château Jérémie or Château Terre Denim). 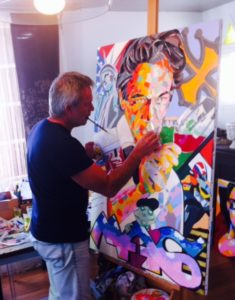 CHAP at his studio, working at the “table of life” of Jean-Claude Mas. Photo credit: Christophe Heymann painter – CHAP.

So thirty unique bottles were born, melted by Daum and decorated by artist Christophe Heymann, alias CHAP, whose style fits in the current of narrative figuration punctuated by many references to comics and Pop art. “Each bottle is different. I tried every time to include a reference linked to the world of wine and the Paul Mas Estates”, says the artist. What Christophe Heymann likes is to represent a universe or a portrait, which he has been doing successfully for a few years in what he named his “Life pictures”, large painted compositions that depict a person, a family history, a city, or even a company. Symbols and allegories take the attractive form of a fantastic bestiary, superheroes or multiple references to the history of the arts.

Thus, one finds for example a portrait of Jean-Claude Mas alongside the face of Bacchus, further the little Prince faces a charming carousel for children, while silhouettes of naked women are admiring a vine. The bright colors and the painter’s precise lines make the luxurious wine container sing. The wine won’t be bottled until 2017 for the auction (to benefit charitable works) of the thirty signed Daum and CHAP bottles in ten different countries. All topped off by a bracelet which will be passed around the neck of the bottles, crafted by Xavier Pruniaux, jeweler in Pézenas. Here again, the goal is to highlight Languedoc through its craftsmen, this rural land about which Jean-Claude Mas likes to say that “everything needed to be redone when he inherited the 35 hectares of family vineyard.” 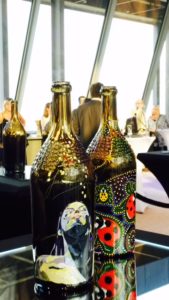 Far from being just a marketing operation, the winemaker emphasizes the purpose of this exceptional project that is similar, like wine, to a “life experience” while stating that the Astelia AAA Crystal cuvee also embodies Jean-Claude Mas’ winemaking know-how on a selection of plots, conducted according to sustainable and biodynamic principles. Jean-Claude Mas, often described as the winemaker of the ‘New Wave’ of French wines, has achieved his goal: that of making ‘rural luxury’, a notion of excellence that he now exports around the world and from which he made a trademark all the way into wine tourism through Côté Mas, a refined venue consisting of a restaurant and two suites to accommodate wine enthusiasts. Small plus, an unexpected food truck will delight lovers of the American dream and French gastronomy.