Pierre Charles L’Enfant was born as the second son to Pierre L’Enfant, a famous painter in service of the French King Louis XV on August 2nd, 1754. Growing up in comfortable settings, Pierre became fascinated by the architecture and different forms of art in the capital city of Paris at a very young age. This interest prompted the youthful boy to study art at the Royal Academy in the Louvre starting in 1771, before transferring to the Royal Academy of Painting and Sculpture. Pierre would catch the attention of many teachers and professors due to his excellent artwork, and would’ve contributed many skillful assets to France upon graduation if events in North America had not changed in the later years of the eighteenth century.

By side-stepping from the passion he loved and traveling across to the other side of the Atlantic Ocean, historians can see how passionate Pierre was with the American independence movement and life in the New World. He briefly put his life and hobby on hold to contribute to American freedom. One can assume that Pierre became interested in the history of the thirteen British colonies during university studies, but no one really knows for sure. His passion to help the colonies became a reality in 1776, when at the tender age of 23 he enlisted as a volunteer in the Continental Army. It was not unusual for many Frenchmen to enlist in the rebel army at the start of the American Revolution. At this point in time, the French government, economy, and debt had been shaken by the results of the Seven Years War, which in turn left France with little empire and power still in possession in North America. Licking the wounds from their disastrous defeat, the French public cried in anger and took revenge to a new level when the British colonies declared independence on July 4th, 1776. Much of the general public wanted to assist their “brothers-in-arms” and fight the British, while others feared that another war with Britain might produce negative results. The nation was split down to the core, but the peaceful protests in the streets did not deter Pierre away from his opportunity to fight for what he believed was right.

As soon as Pierre arrived in North America, he knew that he had found his lost home. According to many diary entries, the young man adored the new lands, the rolling hills, and the New World atmosphere. He slowly became adapted in the foreign culture, even going as far by changing his name to an English name, “Peter”. Due to his vast knowledge about architecture, Pierre was commissioned as a military engineer and placed under the command of the famous Major General Marquis de Lafayette. As both men were French and had similar interests, a lasting friendship formed, introducing Pierre to the new world of military tactics and politics. This binding relationship helped Pierre land himself another promotion shortly after, where in 1779 he was named a captain in the Continental Army, and exposed himself to the likes of General George Washington. At Valley Forge, the artist caught the eye of the great American hero, who was vividly impressed by his talents. Pierre would later become a key member of Washington’s private staff, and would even be commissioned to paint a private portrait of the general, which still survives to this day. The glory days of Pierre’s military career would soon be over, but it is impressive to point out that the juvenile artist from Paris, who had left his home behind to help a group of strangers abroad had risen the military ranks in just three years, forming a strong attachment with two of the most famous military generals of all time, and establishing himself as a ferocious patriot.

As the American Revolution wound on, Pierre would become one of the many soldiers wounded in battle at the siege of Savannah on October 9th, 1779. As he was unable to escape the city with fleeing colonists, the captain soon found himself in the hands of the British Army as a prisoner of war. Pierre was one of the few lucky captured soldiers to be exchanged by the British in November 1780. Pierre was then discharged from the Continental Army shortly after, ending his stint as a military man. Before we discuss the next chapter of his life, it is important to once again note that Pierre was among the many Frenchmen and Frenchwomen who laid down their lives to help the colonists win their war of independence. Maybe they thought this world event would spread democracy to their own country (which it eventually did), or maybe they were just acting in their own self-interests and wanting to gain some valor for themselves, but in reality they needn’t have helped at all. Thus every foreign able body whom took part in this episode of freedom should be congratulated as the selfless champions of liberty.

After the revolution, the then-middle aged artist returned home, only to find that America was calling his name again. He resorted to finding a place to reside and a career in New York in 1784. In one of the fastest growing cities in the United States at the end of the eighteenth century, Pierre took advantage of the bustling activities around him and used the opportunities to immerse himself into the North American culture, connecting to many of the wealthy landlords in the state. Over the next six years, he designed lavish furniture and elaborate colonial-style houses for the upper-class, as well as redesigned the New York City Federal Hall for the 1st Congressional session (March 4th, 1789). Pierre was making a name for himself by the end of the century, becoming one of the most prolific architects and designers in the world; his next task would become his biggest task yet and forever cement his forgotten legacy.

When the Constitution of the newly-minted United States was approved in 1789, it stated that a federal district was to be planned and constructed on a ten square miles plot of land. Upon his anonymous election as the first President of his country, George Washington remembered the young French artist whom had stayed at his side during the harsh winters of Valley Forge and invited Pierre back into the political spotlight, hiring him to design the new capital city. The location was chosen on ten square miles north of the Potomac River and on the marshy lands south of Maryland. Set with this historic task, Pierre immediately went to work in the early years of 1791, working on a plan that would later change the architectural face of the nation. Using designs of European cities like Sir Christopher Wren’s plan of re-built London as a guide, Pierre constructed an impressive image of the proposed federal city. His plan was a gridiron of irregular rectangular blocks with broad diagonal avenues. The paths would be wide and squares would be located at each of the many intersections of the city, boosting the vast amounts of space and paving way for future monuments and fountains. These paths could also be later used as roads, as Pierre imagined that the advancement of technological and transportation needs would become a reality in the future. The city would be built upon a series of canals, signifying the impressive combination of nature and man living together in harmony. Pierre went further than his original job description by even designing the federal buildings located in the capital. One of these structures would be the “President’s House”, which the artist imagined as 5x bigger than the house that stands in Washington D.C. today, complete with ornate furnishings, public gardens and grand monuments. Pierre’s vision would exceed every capital city built up until that time with its imposing image. Unfortunately, the plans that were originally conceived did not shed any light in the end.

Thomas Jefferson, Washington’s Secretary of State would later interfere with Pierre’s plans. Jefferson had imagined the capital city to look similar to those that were located in New England, such as Boston and New York. Instead of the wide pathways and spacious intersections, he had imagined a quant small city that was interlocked with narrow streets and a few courtyards scattered here and there. The commission board for the new city would soon realize that Washington had chosen an artist who did not favor those who distracted his views. Pierre became very adamant that the city would be built to the likes of his vision and no one’s thoughts would sway his head in a different direction of thinking. Jefferson increasingly grew impatient with the artist’s headstrong ways, causing tensions between Pierre and Washington’s closest political advisor. By 1792 the commission board had grown tired to battling Pierre and persuaded Washington the fire the artist from his position, even when the President was reluctant to do so. Pierre left his post in a sorry state, having received no pay or recognition for his work. In the end, the commission board did not even use all his elaborate designs, and his name would not be mentioned with the modern city plans. Pierre Charles L’Enfant had come so far and had tried ever so hard to please the Americans, just to fall short and cower away in the shadows, slowly erasing his name from the history books.

Later life grew hard for the once-famous Pierre. The artist retreated back into the countryside and out of public life, ashamed that he was banished from the project that he had once loved and the task that would have inked his name permanently in the history books. Instead Pierre retired quietly and died at a friend’s house in Maryland on June 14th, 1825. At the ripe age of 70 years, he died in the depths of poverty; his valuables worth only $45 in today’s value. Although his body was eventually moved to a permanent location in Arlington National Cemetery in 1909 by the national government, Pierre’s legacy is largely forgotten. He is not mentioned in most history books, and has been unknown to the American public for many years. Pierre Charles L’Enfant is a figure in history who deserves more recognition than he has been given. Not only did this humble, self-dedicated workaholic sway away from his hobby to help his fellow North American comrades fight in a war that he was never asked to participate in; he also provided the United States with the plans for modern architecture, designing one of the greatest cities in the world. Not all of his plans were used, and his legacy is still far away from making an impact on top of the surface, but behind the scenes, it was the art, imagination and heroism of Pierre Charles L’Enfant that helped redefine American culture, solidifying the view that he was one of the most important founding figures of this nation.

“Eleanor of Aquitaine – The summer of a queen” → 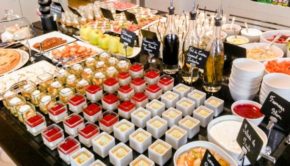