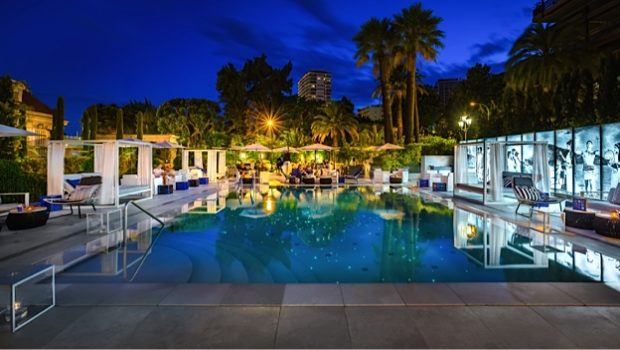 Metropole Hotel in Monte-Carlo: a historic palace enhanced by contemporary design in the heart of Monaco 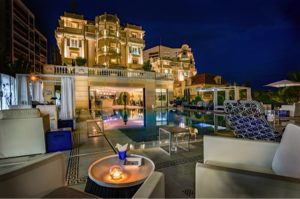 Calm and exquisite pleasure reign there. And luxury of course. In the smallest details. At the Metropole Hotel in Monte-Carlo, an invitation to travel begins in the driveway of honor that spreads its Italianate finery as an introduction to patrician face of the facade of the hotel. Barely entering the grounds of the palace, we feel transported to a different, refined world, the Olympian calm that makes one forget the presence of the road just a few meters away. Where are we? On the threshold of a mansion belonging to a wealthy stranger, on the edge of a wonderful garden? The setting resembles the antique prints where every tree and every stone is carefully drawn in a selected location. Antique statues, some slightly hidden by a few scattered leaves, watch surprised and seduced visitors, from their high perch. Jacques Garcia, the famous decorator with an international career, wanted to recreate here the atmosphere of an Italian Renaissance villa. And he succeeded. The triumphal arch of the entrance, which he himself brought from his personal collections, statues, grimacing fountains and colonnades transport us directly to Tuscany. Smell the Mediterranean perfume? It will guide you into the gourmet dishes of the restaurant, prepared by multi-starred chef Joël Robuchon and his Executive chef Christophe Cussac, if you dare to cross the doorstep… Crispy jumbo shrimp en papillote with basil, spaghetti with blue lobster, spicy emulsion coralline, followed by a John Dory fish filet with Mediterranean vegetables or quail stuffed with foie gras and caramelised, with apple truffle purée… or why not simply, in small portions for snacks, fresh sardines with green asparagus and candied Menton lemon, caviar on a salmon tartare with a gourmet symphony of vegetables, the prickly artichoke with squid, thyme and chorizo tagine, the golden lamb chops, with eggplant and thyme… What do you say? We will say nothing of the desserts, equally refined and appetizing, exuding the colors and flavors of the South of France. The identity of the palace is there: it has remained a Provencal house of exceptional character. And the magic happens. 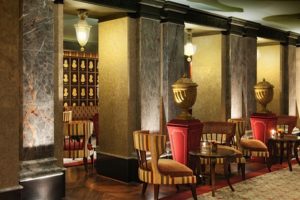 The charm of authenticity
As you know, Monaco is synonymous with luxury. Nearby, the casino, the Yacht Club, the Café de Paris, the Grand Prix Formula 1 (the Metropole Hotel in Monte-Carlo is privileged to have incredible views of the racetrack) do they expect the richest personalities in the world, passing stars or one-night tourists, come for a very special pleasure to discover the mythical rock of the French Riviera and the history of the Grimaldis? If the Métropole Hotel in Monte-Carlo is one of the finest 5 stars luxury hotels in the Principality, it is also the only one of the ten luxury hotels of Monaco that does not belong to a large group. Through its independence, it claims its originality.  “The Metropole Hotel has the scent of a family home, ” said his former director Pierre Ferchaud. His recent successor, Serge Ethuin, newly appointed head of the hotel in December 2015 will have the same pleasure to “build the future of this legendary establishment,” he said. he also experienced the luxury hotel, it has evolved during 30 years with the Hilton group, headed the famous Roman palace the Rome Cavalieri then knew a new dynamic at Royal Monceau Raffles Paris. The building was created in 1889 in the neoclassical style of the Belle Epoque. Ideally located in the Golden Square of the Principality, near luxury shops, gardens and the casino, this historic house is on a human scale and it is this privacy, this warmth that gives it its charm, its authenticity. We advance in its corridors on tiptoe, and curl up in a chair upholstered in old-world charm. Here, no ostentation. But refinement, elegance. Above all, each object has to tell more than a century’s history of the place. In the lobby, you can see for example a series of portraits of personalities who have made hotel history, among which it can be fun to hunt for the more recent face of Joël Robuchon.

A historic house
Since its construction in the late nineteenth century (on land that belonged to Pope Leo XIII), the hotel attracts an aristocratic clientele in search of the pleasures of a summer vacation, including the English aristocracy, fond of travel, refinement and discretion. One also encounters successful businessmen, intellectuals and, more recently, celebrities. Of various nationalities (many Englishmen, Russians, French, Americans and Chinese) and contrasting worlds, the clientele is increasingly local, and loyal, especially to the dishes of Joël Robuchon. From his main restaurant (which has two Michelin stars) to his Mediterranean-inspired menu and open teppanyaki kitchen that allows guests to be near the cooks,they cannot seeem to get enough of Chef Robuchon ! The same goes for the Yoshi restaurant, Joël Robuchon’s first Japanese restaurant, crowned already with a Michelin star and run by one of his faithful accomplices, the Japanese chef Takeo Yamazaki. One can also take lunch or breakfast to the pool area at the Odyssey restaurant or relax in the lobby bar, always accompanied each time, by the culinary offerings of the French chef.

Because recently, the hotel reinvented itself, developing its history while embracing the contemporary. Its development began in the 1980s with its takeover by the Lebanese promoter Nabil Boustany, who had fallen in love with Monaco. Since then, the Boustany family still owns the hotel and began a major campaign of restoration work in 2003-2004 to restore the prestigious, historic building and create an innovative concept for the Metropole Hotel in Monte Carlo. The work of great names in design gives it the sophistication and glamor that it needed.

The contemporary design by Jacques Garcia, Karl Lagerfeld and Didier Gomez
The lobby, rooms, conference facilities and spa were completely designed by Jacques Garcia (best known for his work at Costes and Fouquet’s in Paris) who bet on woodwork, tapestries and objets d’art to create spaces that were both warm and luxurious. The shimmering materials agree with the honey-colored floors that recall old Mediterranean mansions. Thus the 126 rooms and suites (64 in all) offer this historic style, while leaving room for comfort. Note that for the bathrooms, it seems to be an antique style that has inspired the designer. Just see and test the huge bathrooms with walls completely covered in Carrara marble. Relaxation and luxury guaranteed in these spaces where Apollo and nymphs may well make an appearance. A few kilometers from Monte Carlo, would the decorator have gone to find some inspiration in the sublime Villa Kerylos of Beaulieu-sur-Mer, built in the early 20th century on the model of a villa of ancient Greece?

In the lobby, back to the dim and cozy atmosphere that characterizes the hotel. This is what pleases many stars who come – Rihanna, Jennifer Lopez, Robbie Williams… – and who are primarily looking for tranquility and privacy. And like at the Bellagio in Las Vegas, the ephemeral centerpiece of the lobby – a hanging tree garden, a flower arrangement, or any other original creation – changes every three months. 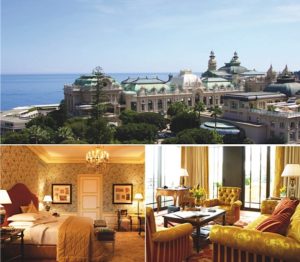 The finest location of the hotel remains the Suite Carré d’Or, on the top floor, where the Louis XVI style furniture blends perfectly with an exceptional wooden bookcase filled with original works. The bibliophile spirit coexists here in harmony with the trendiest events of current fashion when luxury brands rent this 240 m² space to shoot for a few hours. The Golden Square Suite is also equipped with a huge terrace that boasts one of the best views of the Bay of Monaco.

The 2000 m² Metropole ESPA spa (The ESPA brand was created by Susan Harmsworth) was also decorated by Jacques Garcia and offers an exceptional wellness area in the heart of Monaco (relaxation room, a nail studio by Bastien Gonzalez, a steam room / sauna / caldarium with two tropical showers, 10 treatment rooms including 2 private suites and a fitness studio as well as a shop holding the Reverence product line by famous pedicurist Bastien Gonzalez). This space corresponds directly with the outdoor pool “designated” by Karl Lagerfeld who designed a huge photographic fresco in “néoantique” style reminiscent of both a Greek tragedy and the earliest seaside paintings. The pool and restaurant, whose menu is by Joël Robuchon, are called the ODYSSEY space. This is the most romantic space in the hotel; especially at night, when the pool is illuminated by a thousand twinkling stars. The black and white contemporary Karl Lagerfeld furniture brings a chic and fashionable touch to it all and contrasts with the shimmering interiors of the palace. The evening ends with a cocktail in the musical atmosphere of Béatrice Ardisson, who brings glamor to the atmosphere of the place, or at the sushi bar of the Yoshi restaurant designed by Didier Gomez, a decorator used to working with top luxury names like LVMH and Yves Saint Laurent. The Japanese garden of the restaurant was conceived by landscape architect Jacques Messin.

At the Metropole Hotel in Monte-Carlo, whether just to enjoy a drink or to stay several nights, everyone can savor a moment of delight thanks to the food, the wellness area, the discovery of contemporary design or simply the history of the hotel. Some more VIP types, will want a vintage champagne at night, others more royal types, a throne in their suites, and others, more athletic types, a game of golf in their rooms… it seems that every desire becomes reality. The hotel staff confirms ! Now if that is not this the height of luxury…? 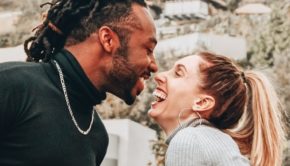 VIP Travel Tips: How To Travel Like A Professional →