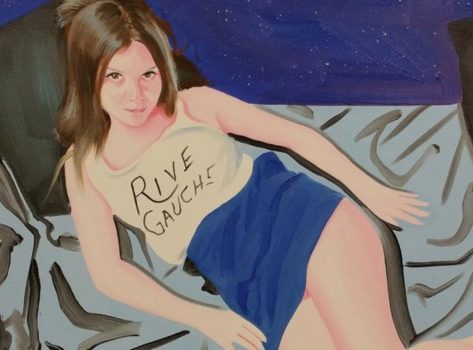 The colorful and sensual art of French artist Frédéric Léglise 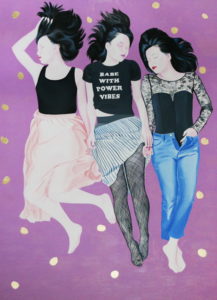 For French artist Frédéric Léglise painting is “an act of love” and through the sensuality of the women he depicts, he expresses the sensuality of painting. He would probably enjoy a time travel to chat with Rodin and Klimt who shared his fascination for women and taste for sensuality and erotism.

Inspired by his models, from his wife to some friends, he captures them in intimate poses and then translates it into his own reality, “without being realistic”. It’s the mix between a traditional theme (women) and his contemporary approach that makes his paintings unique. 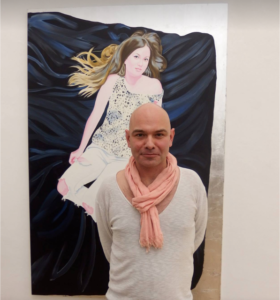 He says that he was inspired by Willem de Kooning who was an advocate of the pluralism of styles and said “Art should not have to be a certain way” to break free from the claim of his teachers that “painting was dead”. Another quote from de Kooning is “paint what you love” and Frédéric Léglise certainly follows that wise tip which certainly shows in his work.

Frédéric Léglise, based in Paris, was recently awarded an artist residency at the ESKFF, at Mana Contemporary, in New York area. His work has been shown in France and internationally and his next show will be held in the Frissiras Museum in Athens. Welcome in his colorful and sensual universe.

What was your artistic path, why did you choose painting?

In fact, when I was a teenager I wanted to become a car designer. I was in a little town, Brest, in the north west of France, so I started to study in the art school of this city. During my first year, I became passionate about art, and painting in particular thanks to art history classes. Then I decided to become a painter. But in the nineties, during my art studies, painting was almost forbidden; most of our teachers would tell the students that painting was dead. The only type of painting that was acceptable was abstract painting. So, I started to paint abstract pictures, but at the same time I was very impressed by Picasso, De Kooning, Baselitz, Bacon who are not abstract. When I was accepted at ENSBA (Ecole Nationale Supérieure des Beaux Arts) in Paris, I was still painting abstract, and I also tried sculpture, installation and video… But I was frustrated. When I was studying in Paris, my girlfriend was living in Brittany so I started to send her love letters with erotic drawings. Soon, I realized that I had more pleasure in doing these drawings than the abstract paintings, the videos or installations I did in art school. These drawings are the beginning of my actual practice, and I started to take nude pictures of my girlfriend and to paint her from the pictures. At the same time, I read a book of the different interviews of Willem De Kooning, where he explains that when he started to paint the first women series, some critics and artists told him that he was an abstract expressionist, and that painting women was a come back to the past, not a work of an Avant-Garde artist. A critic told him “you have no reason to paint Women now”. De Kooning answered, “that it is true, but there are no reasons not to do it as well”. So I thought, that if I wanted to paint women and nudes, I had no reason not to do it, whatever the teachers thought. It was a hard path because almost nothing in the French art world in the nineties was similar to my practice. But my decision was made, and it is still what my work is about now. At the same time, I’ve been painting for many years a series that I called self-portraits of my shadow. I make these works from my shadow on the paper, on the canvas and sometimes on pages of books reproducing artworks from art history.

What do you want to achieve with your artwork?

My main subjects, portraits of women, nudes and self-portraits, are very classical in a way. I want to revisit them in a contemporary way. The portraits of these women look like the models but are not realistic. I feel like too many artists in figurative art are prisoners of reality or photography. My way to avoid that is not to paint a kind of “surreal world” but to twist very simple elements from what I see:

– twist the color of the body,

– put the figure out of the original context by using gold or aluminum leaf, in order to isolate the figure and to turn the space around the model into a surface which reflects the light

– transform some elements of the space where the figure stands: for example like in the painting “Rive gauche” and also in the painting “Natsuko ” where I turned the shadow in the sheets into abstract brushstrokes.

– play with the point of view where the figure seems to float in the space. 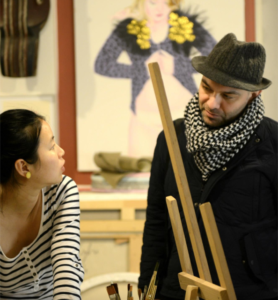 How do you get inspired for your new creations? Who are your models?*

My models are non-professional. They are women that I meet in my everyday life: friends of mine or of my wife, or women that I meet at openings…I get the inspiration from the pictures I take during the shooting. I take hundreds of pictures of the model in different clothes and attitude that we discuss together. The clothes and the prints on the clothes are often inspiring, because sometimes it can bring new colors, new gestures on the canvas, and it can be like a kind of abstraction. The transparency of the clothes is a very stimulating thing to translate on the canvas also. I read more and more mangas, and about traditional Asian painting and I pay a lot of attention at the background and at the use of the space in the Asian art. I am also interested in Pop art, French painting of the 19th and of the first half of the 20th century. All of these works are trying to translate reality but without being realistic.

Your wife the artist Jojo Wang is both your muse and a collaborator. What influence do you have on each other work?

My wife encourages me a lot in my work; she finds me some models and gives me her opinion about what works or not in the paintings. As she is Chinese, it made me look a lot more in the direction of Asian art, cinema and literature and this has clearly influenced my painting. It is more difficult for me to tell you what influence I had on her work, but my connections gave her opportunities to participate in several shows, and also to meet collectors that bought her art. Her work became also more opened to eroticism, because she didn’t allow herself to do so before, maybe because of a Chinese traditional background she had before. Since I met her, I painted her a lot, alone, or with other women.

Which image of women do you want to depict?

I have a loving gaze for the women I paint, and I want to translate it through the way I paint them. I think for me painting is an act of love, and the sensuality of these women is a metaphoric way to express the sensuality of painting. 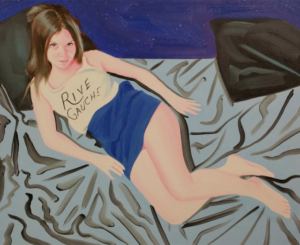 In Korea, when I had a solo show at the Artworks Paris Seoul Gallery, I made a shooting with the assistant of my art dealer as a model. When I made the pictures a cat came near the model, and so I decided to paint it also. That was unexpected, but it was very interesting, because of that.

What is the question you’re asked the most?

How much time does it take to make a painting? It really depends, it can be 2 days, and sometimes more than a month, because usually I work on several paintings at the same time.

What is the question you’d like to be asked?

Why painting? I know you’ve asked me, but I’d like to add that what I like in this medium is that you are really independent in your creation since you need few materials to do it. You can work only with paper and ink for example, just as for writing; the difference is a translation is not necessary to be understood. Anyone can look at what you paint and get it. 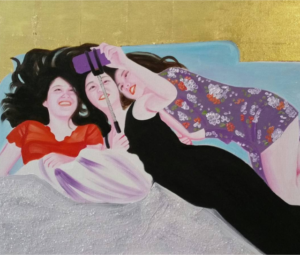 What are your projects for the coming months / year?

My next important show starts in January at the Frissiras Museum in Athens, called « New horizons in painting ». It is a group show and there will be a focus on my work. They also planed a solo show of my work at the Museum in 2019-2020 with 70 to 80 paintings and a big catalog. I have other projects of solo shows in Europe for this year, so stay tuned!