Published on January 10th, 2018 | by Isabelle Karamooz, Founder of FQM

CES 2018: Luxembourg startups are on the starting blocks

The largest electronics show in Las Vegas, known as the Consumer Electronics Show (CES) opened up on January 9th.

Several companies from Luxembourg are present for the FIRST TIME this year at the Consumer Electronics Show, the major electronics show held from January 9th through the 12th in Las Vegas. In total, eight startups were selected and received a certificate of participation for the CES Las Vegas.

Luxinnovation coordinated the trip with the European American Enterprise Council (EAEC) which manages the Luxembourg Pavilion in Las Vegas, a transatlantic startup accelerator based in the Grand Duchy and San Francisco. French Quarter Magazine is delighted to introduce you to the lucky recipients and in particular to some of the startups that Editor-in-Chief Isabelle Karamooz was able to meet during her stay in Luxembourg last week. 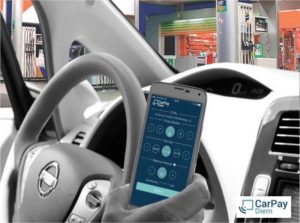 “Many of our shareholders told us that (CES) was worth going to,” says Frédéric Stiernon, founder and director of CarPay-Diem. CarPay-Diem is a company that allows motorists to connect with gas stations by simply using a mobile app. Allowing drivers to manage the payment of their gas without ever having to get out of the car. The driver chooses a pump, refuels his car and the bill is sent to his smartphone where points are then added to his loyalty card. This concept is underway in several networks in Belgium, France and England. Luxembourg and Germany will see their first equipped pumps in the coming weeks. Other countries will be announced during the year. “As soon as we registered with CES we quickly began to get requests for business meetings. Several companies want to know more about our enterprise “Frédéric Stiernon tells us. “We felt that since they had already generated so much interest in us before even going to the show, that we had to go.” 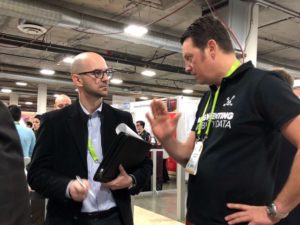 The European American Enterprise Council (EAEC) directly supports eight Luxembourg startups. They prepared their team leaders before the big trip to Nevada. Other companies, as numerous as they are, go there accompanied by large groups, or on their own. 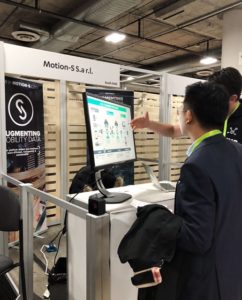 Motion-S booth at the CES Las Vegas. Photo by Motion-S.

The CES has become highly publicized, garnering worldwide media attention. The show features rather mainstream products. “Our selection within this convention has already given us a lot of visibility in Luxembourg thanks to the press. “It’s a big promotional booster for us,” says Stephan Stoffels, Senior Marketing Manager. It also “attracts potential international investors to Luxembourg,” said German Castignani, the co-founder of Motion-S. This new startup company not only gives feedback to its drivers but also the possibility of adapting the insurance rate to the profile by providing information and data to insurance companies, leasing companies and car sharing companies while also informing its users on how to drive their vehicles. With this data, we do risk analysis and create driver profiles. According to German Castignani, “this platform will give an added value to our customers and our young drivers. For example, in the event of a breakdown we can detect this and immediately send a mechanic out to the location. We can also offer larger insurance discounts and there’s opportunities to receive bonus points for good driving behavior.” The CES will highlight this system and network with US customers who work in the telematics field as well as keeping up to date with the latest technology.

“Going to CES,” says Paolo Brignardello, Fundsquare’s Head Product Management and Marketing, “it’s  important to engage with international players in the investment fund industry on the spot. Fundsquare is dedicated to investment funds and is a digital fund distribution platform based on blockchain technology. 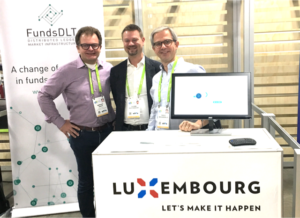 Fundsquare booth at the CES Las Vegas. Photo by Fundsquare.

This new project aims to facilitate connections between investors, management companies and distribution stakeholders. It also makes it possible to share a database and eliminate problems related to the chain. Fundsquare is an independent company that was set up on the initiative of the Luxembourg Stock Exchange in June 2013. 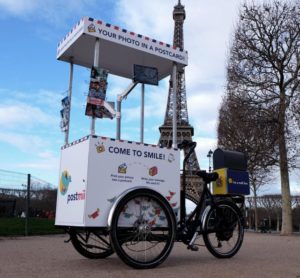 “The CES will give us a certain visibility and will open us up to other countries which will allow Postmii to develop much faster,” confirms Kevin Colinet. Kevin’s The spokesman for the 4 co-founders of the French startup company which will join the Luxembourg delegation. Created in 2015, Postmii gives tourists the opportunity to transform their photos directly into postcards on the spot, and thanks to the Postmibike they’re able to be found at a number of the best tourist spots. 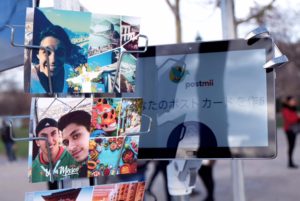 Postmibike is a self-sufficient electric tricycle that is ecologically friendly, thanks to solar batteries. Clients have two options, they can either transfer a picture from their smartphone directly to the Postmii tablet or take a picture of themselves using the Postmibikes tablet. The photo is then personalized and the postcard is printed right there, all within a few seconds. The postcard is then sent out by the startup later that day. “We want to find our first big licensees who will buy our Postmibike and become franchise owners, allowing them to be their own boss’” announces Kevin Colinet. “We will launch ourselves on the American market! ” 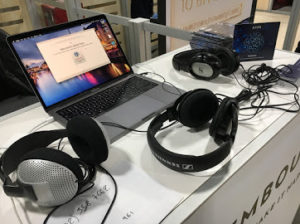 Even the much hoped-for venture by the Luxembourg company, Aiva Technologies, a startup that launched their project almost two years ago and whose largest market is in the United States, has seen success. This new startup has developed an artificial intelligence that creates personalized music for video games, commercials, documentaries and movie soundtracks. 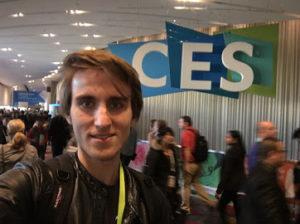 Pierre Barreau, the co-founder of Aiva. Photo by Aiva Technologies.

Pierre Barreau, the co-founder of Aiva, told us that he wanted to go to CES to “meet companies and potential customers to develop business internationally. ” 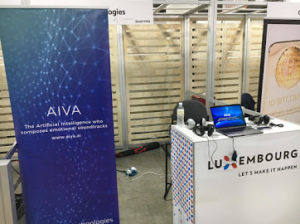 Unfortunately we didn’t have time to meet up with some of the other Luxembourg startups who are also present at the CES show in Las Vegas but want to take this time to mention their names anyways. Newer companies such as CoinPlus, Virtelio and VR Timetravel, are also at this event.

The CES event is comprised of over 4000 companies, 600 startups, nearly 200,000 visitors as well as those doing media coverage. France, for its part, holds its position as the runner-up. Second only to the United States with (280 startups) as an exhibiting delegation, far ahead of the Netherlands (60) and China (55). France is well represented this year, having 365 companies, communities and organizations, according to a census of the State Secretariat for Digital. Of these, 274 startups – more than a third of the total – exhibits in Eureka Park, the mecca of startups.