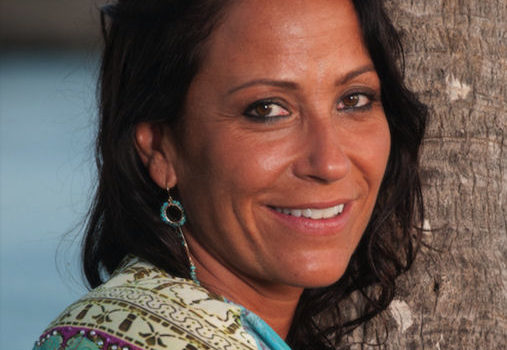 Sophie Matisse expands the artistic field of the family 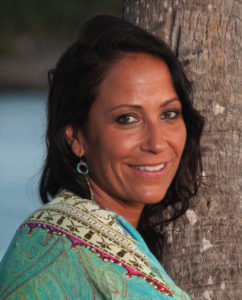 I first saw Sophie Matisse’s work in the excellent exhibition Matisse and American Art in The Montclair Art Museum, NJ. The show included works by Roy Lichtenstein, Rothko and Warhol among many others. Seeing his wide influence on his pairs, it would have been surprising that Sophie could escape it, being her great granddaughter. Or escape the influence of Marcel Duchamp, her step grand father and of sculptor Paul Matisse, her dad.

In 1990, Sophie Matisse relocates to Paris to study at Ecole des Beaux Arts and then marries the French artist Alain Jacquet. The latter will help her gain confidence to show her work and she will gain recognition with the series “back in 5 minutes” where she appropriated famous paintings where the main character is gone. She then worked on other series of paintings and works on paper and her personal growth can be observed in the evolution of her work. She admits herself that with time she put more and more of herself in her art and she’s now going further! She’s currently working on short stop motion films which makes her feel liberated because “with a name like that, I (thought I) was supposed to be a painter and that once you started to be a painter you don’t change.” But then isn’t it also a family tradition to push boundaries?

We are delighted that Sophie Matisse accepted this invitation to chat and we went from talking about her French roots, her career and her new artistic endeavor. We look forward seeing her new work! 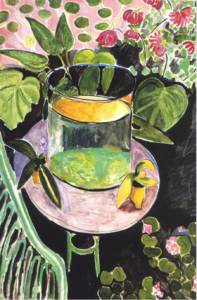 You were raised in the USA and lived in France, how do you combine these two origins?

Oh I never got that question, it’s refreshing! It is kind of a curious relationship because I am American but I did spent about a decade in France… A funny story that happened to me was when I was taking the exam to get into Ecole des Beaux Arts and went to look for my name on the wall. All the students were there and I was looking in the M section and as I saw that my name was there, two other girls saw it too. They started talking together and seemed surprised about it but I didn’t know enough French to understand well…maybe that’s a good thing I don’t know! That story is a good example of the fact that it’s been a challenging and interesting position to be in: your name suggests one thing yet your whole existence is different, kind of two opposite. I guess it’s consistent with my work where I play with the coexistence of these opposites.

Any favorite memory or place in France? 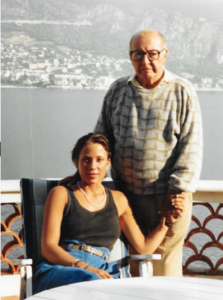 I did spend some time in the south of France with my grand father Pierre. It was really magical because the light down there is so extraordinary. I knew that light was great there but I did not in understand in the big way that light is very magical. And I see that again and even more so in Tunisia, where we’ve built a house with my husband now and I noticed that the light there is very similar. Different places in the world have their own magic and if you can experience that it a way, it’s extraordinary.

Another place would be the apartment of my grandmother Teenie in Neuilly close to Paris. It’s an old artist studio, facing north and the light that come in there is very very very special. There is something more to it that makes it incredible. As time goes on, my main focus is really looking at the different quality of light and how it affect us.

I was looking at your works on paper where you did include and mix French brands with other symbols like the piece with Carambar and a dollar bill, mixing this French brand and the American symbol. What led you to create these paintings?

It’s very related to my notebooks that I did early on where I included a lot of wine labels. The French are amazing about naughty or funny words that they include in some of the labels like “Domaine de Monluc”. I thought it was so fun and it makes a great funny departure for my paintings! About the Carambar, it’s a more special piece related to my daughter when she was younger. Every summer that we would spend in France, Saturday was her “candy day” and she would have a whole collection of Carambar, it was funny. This brand is so suggestive of the kid/ naïve /sweet world and playfulness … a symbol of childhood. 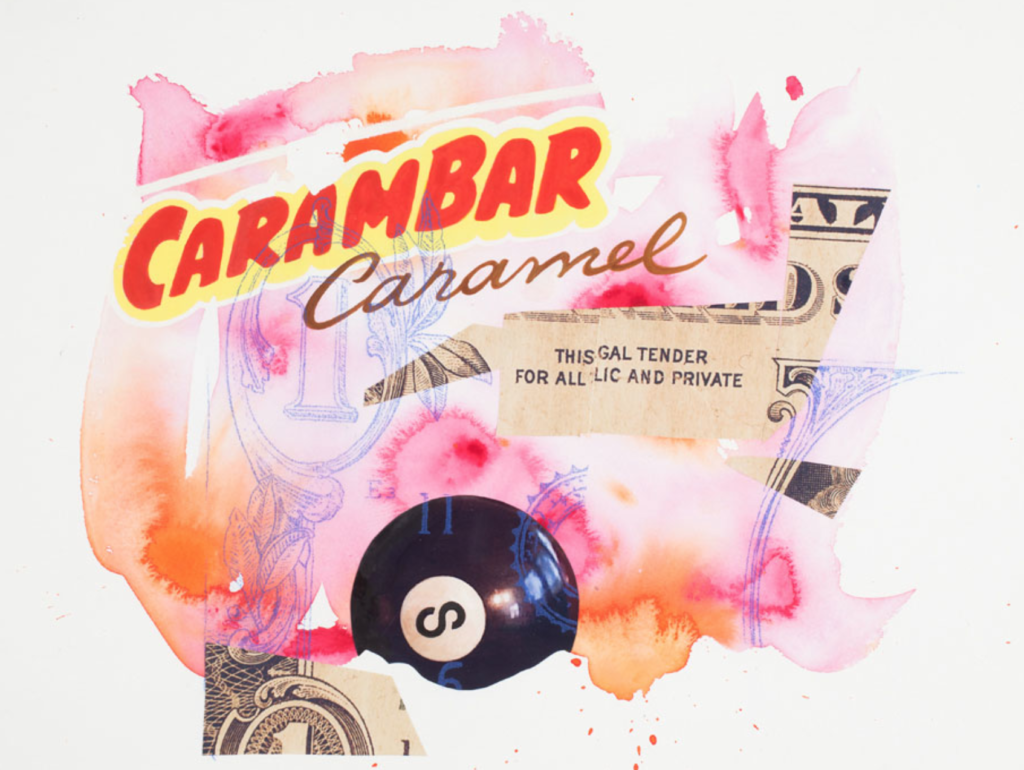 I read in a previous interview that you were interested into the relation between art and healing. Could you tell us more about it?

Yes, it’s something that I feel is deeply important. I do think that part of the attraction that people feel for the work of Matisse without being conscious of it, is that those colors do have a healing quality to them. And they’re not “Matisse colors”, some of them are just right out of the tube, but he put them together in a way where we could respond to it. There is a lot of art, which does not have that quality. When he talked about art being “like a good armchair”, I believe his message was that art should be healing and relieving you of the stress of the day. I’m sure that one day I’ll get involved in some way to push this further but I’m not sure how yet.

What I dream of is an art of balance, of purity and serenity, devoid of troubling or depressing subject matter, an art which could be for every mental worker, for the businessman as well as the man of letters, for example, a soothing, calming influence on the mind, something like a good armchair which provides relaxation from physical fatigue. Henri Matisse

What are you currently working on?

I started making very short stop-motion films. My objective is to capture the magic of light and how I do love to see the light coming and change the feeling of the room or playing with the shadows and how it makes you feel. These little films, based on simple human stories, are illustrated through chess pieces that I use as little characters. The quality of light is very transporting for me, like music, so I wanted to capture it. And it’s so fun because for once I don’t feel trapped! I love painting but right now, film is my medium and it’s very liberating. I was feeling that with a name like that, I was supposed to be a painter and that once you started to be a painter you don’t change. 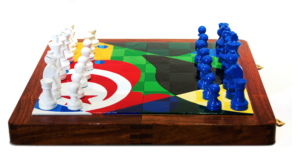 Yes and for some artists, in their artistic or spiritual development it can be sometime a very slow motion process and it will take decades before seeing a movement of some kind. For others it’s different. It’s a luxury to be able to express yourself in different ways and not being stuck to a certain role or style. Matisse did different kinds of things, Duchamp did also and my first husband was a painter but not only. Of course, the message throughout was consistent. It’s certainly important to be articulate in these different languages of art, and get different perspectives, look at things from more than one angle.

You come from a family of artists and art dealer, are you also collector? My cousin started to collect art more than I do. I should trade pieces with friends because it’s a great way to start a collection but I haven’t really done it yet…

About the art scene, there is a lot written about the representation of minorities. How do you relate to that debate?

It’s interesting because I was looking at a collection of Cuban art of a friend and I had never heard of some of these artists but the art is so fantastic! I think it’s a shame to not pay more attention about what’s happening all around and keep it as open as possible. Of course it’s overwhelming but it’s crucial. I feel sorry that sometimes people will spend millions on pieces of art that have no soul and then suddenly you see something from Ethiopia that moves you to the core. People get intimidated because they think they should know more about art and I feel there is a lot said about what we’re supposed to like or not, and it takes away the instinct.

What would be your favorite place to go see art in New York?

I always enjoy going to James Cohan Gallery, it’s one of my favorite. There is also Francis Naumann, which is a gallery where I show, but his shows are always beautifully thought and I always learn a great deal. I also just like going around, taking a look in museums, you never know what surprises you can come across. You always have people who will say that it’s has been already done and I was one of them when I was younger, thinking “what am I supposed to do after Matisse?”. Well, I have plenty of things to say that are very different and as long as there are humans on this earth, we’ll have always something to share and if it’s been said before then what’s wrong in saying it again to be reminded that we are all coexisting and all equals?

To come back to your work, do you plan on showing these films?

I thought about that because when I’m ready to show, it will be really very different from the Matisse family and the paintings I’ve done before, even if some of them like the gouache were very personal. I feel in a way it will be more me than the rest and that I’m taking it further.

You’re finally totally becoming Sophie? Exactement! And it’s so nice because nothing feels better than feeling you’re free to express yourself as you wish. I’m really looking forward showing them when I’m ready. And at this point of my life, I don’t care so much if people will like them or not. I’m happy when it works but if I like them when they leave my studio, they will be part of me.