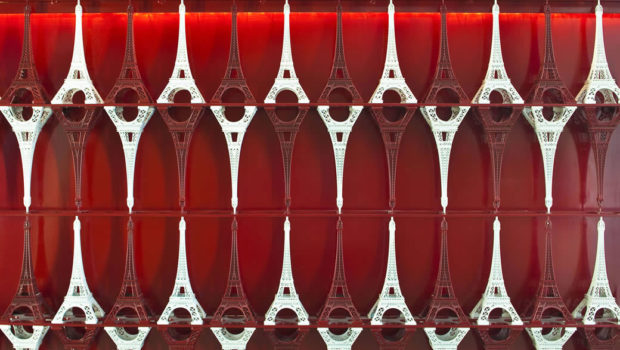 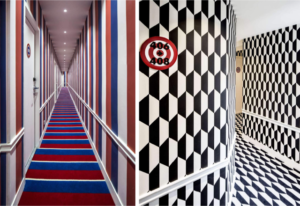 Born and raised in Paris, Philippe Maidenberg is a renowned architect and interior designer who has built his reputation in the hotel industry with eclectic designs that have received both national and international acclaim with among others the “World Luxury Hotel Awards” in 2014 for the Hotel 123 Sébastopol in Paris.

Philippe Maidenberg expertise in hotels has led his agency to work on other projects from residential to co-working spaces since in hotels “all the living areas exist under one same roof”. He has recently been invited by Post Brothers to design spaces for Presidential City, the biggest residential project in Philadelphia, PA and he has other projects coming up in the USA.

Philippe is driven by the quality of the relationships with both clients and collaborators. His lifelong love of music, art and cinema led him to enlist the talents of notable artists, musicians and directors for the inspirations behind some of his most famous projects. The impressive list of collaborators includes Claude Lelouch, Jean-Paul Belmondo, Rickie Lee Jones, Ennio Morricone, Peter Gabriel, Gilberto Gil, Youssou N’Dour, Archie Shepp and Roger Hodgson. 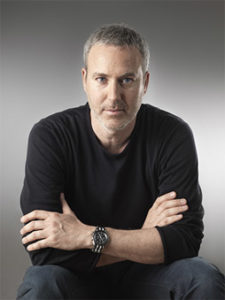 We’re happy that Philippe has accepted our invitation to chat about his path, his approach and his upcoming projects that will take him from Africa to the USA.

What were the key steps to start your own business?

It was quite simple because I was unable to work under others so my choice was quickly made! Of course I did internships during my studies, one in Chicago for example. As I had a need for absolute independence, I quickly created my agency after my studies. I started alone for a long time and today there are seven of us, which remains a very independent agency. Over time, I specialized in the hotel business, following an encounter, 20 years ago with the owner of several hotels. We did 10 or 15 hotels together, some of which were very successful and then it developed with other hotel clients, restaurant owners and so on. 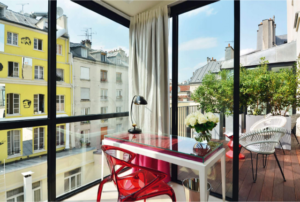 You have worked on very different projects from hotels to private residencies. Which projects do you like the most?

I did a lot of residential before starting the hotel business. I come from a family that had a tour operator so the hotels were part of our life and it’s not surprising I specialized in hotels in the end. Currently the residential is coming back, rather to the scale of the building than the apartment. I work on “co working” office projects that are coming at a great speed because promoters understand the importance of design in these projects. They propose them to us because precisely we come from the hotel, which brings together all the living spaces under one roof. The projects that amuse me the most are the ones I did with musicians, actors and movie directors. It was great experiences where I found myself working with people like Belmondo, Lelouch who played along when they had nothing to prove.

How did these collaborations come?

It had been a long time since I wanted to work with artists but it’s complicated for a hotel in terms of budget to work with recognized artists. Yet I still had this idea in mind but I did not know how to achieve it. A hotel project came up next to the Olympia in Paris and I thought the music was obvious, and since it’s part of my life, I suggested it to some musicians I liked. It worked, they collaborated and some became friends like Jacques Higelin, so it was a very beautiful artistic and human experience. Yet it was not easy because it was about recreating their universe. For artists like Lelouch who have a 50-year career, you must do it well! They were all very simple. For example I had the opportunity to meet in the same type of project, Peter Gabriel via Manu Katché and he is a super star of great simplicity. 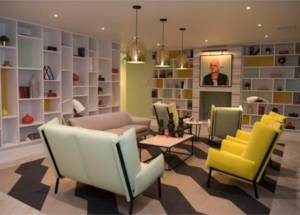 How do you qualify your style?

It’s hard to answer that though I should have an answer! There is a thread in my work but I try not to repeat the same thing, which is one of the difficulties of the job. With the Internet we know what is happening around the world in real time and we have seen everything. There are hotels that open all over the world and sometimes in incredible places but very often, we find things already seen. My big question is what can I bring that will be different and fun.

You have designed very graphic stairs and corridors. Where do you get the inspiration for this type of creations?

Stairs and corridors are the only places where you can do something “extreme”. We can go further to make it a photogenic and striking moment because it is only a passage. We are aiming for an effect whereas in the lobbies or the rooms it must be a little more discreet. And then the fact is that the promoters are looking such places because they are very ” Instagramable”. This is part of the game. For the hotel, it’s a way to get free communication and it’s a must. I did not design them for that, but if people share them, it’s successful. Our job is to design nice places and tell a story. Instagram is a way to share that moment and today we have the reaction of people right away. 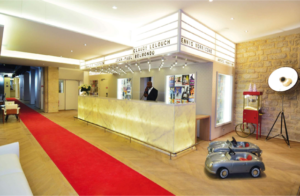 You have a lot of achievements in France but also abroad. Where is it possible to see your creations in the USA?

I have just finished a first project in Philadelphia with Post Brothers for Presidential City, the biggest real estate project in the city. There are four very beautiful buildings of 250 apartments, each with its lobby, fitness room, common areas and swimming pools. We did the lobby and a show apartment for one of the tower. This gets closer to the hotel because there are many common areas. It was an interesting experience where we did the design and they realized it. It was remote work, which worked perfectly well.

Is there anything that has surprised you in the United States in terms of architecture?

The most amazing thing for me is the noise level. Air conditioning, for example, makes a lot more noise but as people are used to it, it is not considered a problem. In France, the legislation is different. This will probably evolve in the USA… 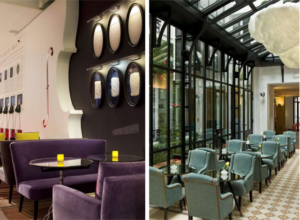 There are so many possibilities… I’d like to pursue projects in the US to have a different scale and different questions. At the same time, a lot of things are happening in France in terms of co working, it’s interesting too. I guess my dream project would be not to have to deal with administration and work only with people I enjoy working with! I would prioritize the human exchange over the project as such.

We have a lot of projects, obviously hotels but not only because I wanted to give another direction to the agency. We prepare a hostel with shared rooms and common areas where people spend more time than in the rooms. We are also working on a fairly important project of co working space. Abroad, I have a project in Togo. It is the transformation of an existing building with a mix of hotel and residence and the approach is very interesting. The hotel industry is evolving with a lot of new services and possibilities and this will create extremely lively places. 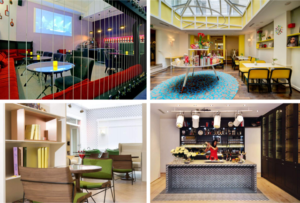 And finally, your favorite historical monument?

I have always loved the work of Frank Gehry who is for me one of the greatest architects. I recommend Sydney Pollack’s “Sketches of Franck Gehry” about their friendship and Gehry’s work. But otherwise my first architectural shock is the Guggenheim Museum in New York, I was 10 years old and it impressed me. This is not the biggest but it is extraordinary because life is always there in the center and it is a masterpiece.