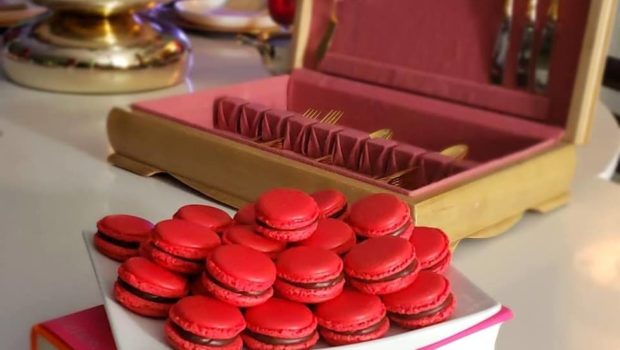 Published on September 26th, 2018 | by Isabelle Karamooz, Founder of FQM

What does Pastry and Cooking Chef John Wilmot tell us about Las Vegas and his cooking experience?

John Wilmot, you’ve worked for several years as a professional pastry cook/ chef. What made you decide to enroll in culinary school? What made you want to learn French?

My love for the culinary arts was spawned at a very young age. I fondly remember spending time with my grandmother and watching her make potica, a Slovenian walnut filled sweet roll that contains copious amounts of honey, cinnamon, and sugar. My mother also used to make and sell birthday cakes and special occasion cakes for friends and family out of our house. I can remember her telling us not to run through the house because we had old wobbly floors and if the cakes in the oven got shaken to much they would fall. At the age of fourteen I began working in a kitchen at a ski resort in Colorado and I immediately fell in love with the fast paced environment of the kitchen. After graduating from high school I began culinary arts school at the Art Institute of Colorado and it was through my training there that I developed a love for the French language. As you can only imagine, a lot of the terminology in culinary school is in French and it was always something I thought about learning, although it wouldn’t be for several more years that I actually decided to take the leap to learn the language. In 2011, I took a beginners French class at the French alliance of Denver and have been studying it at UNLV since 2015.

What makes Las Vegas a great place to go to culinary and hospitality school?

I didn’t actually go to hospitality school in Las Vegas but I do know that UNLV is second only to Cornell University as far as having one of the best hospitality programs in the country. That comes as no surprise to me considering were we are. I mean, we have so many world renowned chefs with restaurants on the Vegas Strip, as well as plenty of local talent both on and of the Strip.

Joël Robuchon has the only 3-Star Michelin Restaurant on the Strip, which is located at the MGM Hotel and Casino but there are also currently two 2 Michelin Star rated restaurants. One of which is Guy Savoy’s restaurant at Caesars Palace and the other is Julian Serrano’s restaurant, Picasso, at the Bellagio. The latter showcases original works of art from the famous artist throughout the dining room. It’s an enticing atmosphere with sophisticated food parallel to the decor. We also have nine 1-Star Michelin Restaurants here, so that’s exciting! But besides all those, there’s also just an overwhelming amount of reasonably priced restaurants that create fresh, high-quality food with exceptional service offered in a more casual atmosphere. Las Vegas has become a Mecca for foodies from all over the world and the Harrah College of Hospitality at UNLV offers an intensive program just blocks away from one of the world’s greatest culinary hotbeds – the Las Vegas Strip. 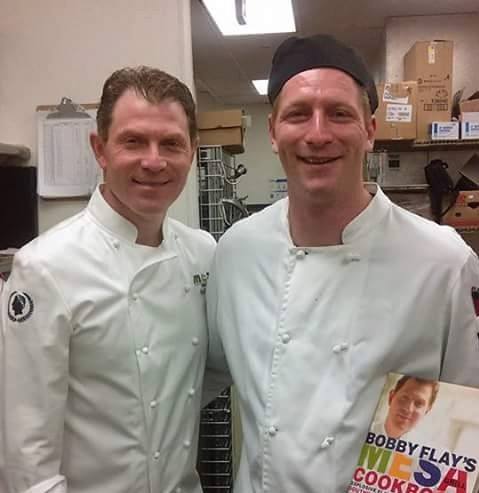 What did you enjoy most about your job at The Stove LV in Henderson? Did you ever find yourself sampling dishes or finding other ways to get involved in the cooking experience?

Oh absolutely, as cooks and chefs we’re constantly tasting our food and playing around with recipes so that they’re ever evolving. Without doing so, our worlds would become stagnant and boring. I was continuing to create new dishes right up until I resigned from my position at The Stove. My last week there, Chef Scott Commings and I were bouncing ideas off of eachother in order to move the menu forward into the fall season. I wanted to do Belgian waffles topped with banana hazelnut crunch ice cream accompanied with a warm port wine and fig reduction sauce. We decided to do something a little bit different together and ultimately we ended up making an amaretto bread pudding with a banana almond praline ice cream and we served that with a red wine cherry caramel sauce.  As a chef you need to be able to think on your feet, to adapt to situations, and to constantly improvise if need be. I think what I enjoyed most about working there was quite simply all the things that I’ve always loved doing in kitchens… Making chocolate mousses and Italian buttercreams, baking cakes, muffins, cookies, and scones… All the little tea pastries and petits fours. Making ice creams and sorbets… The buttermilk biscuits and the chocolate croissants, and also just making new friends in the process. 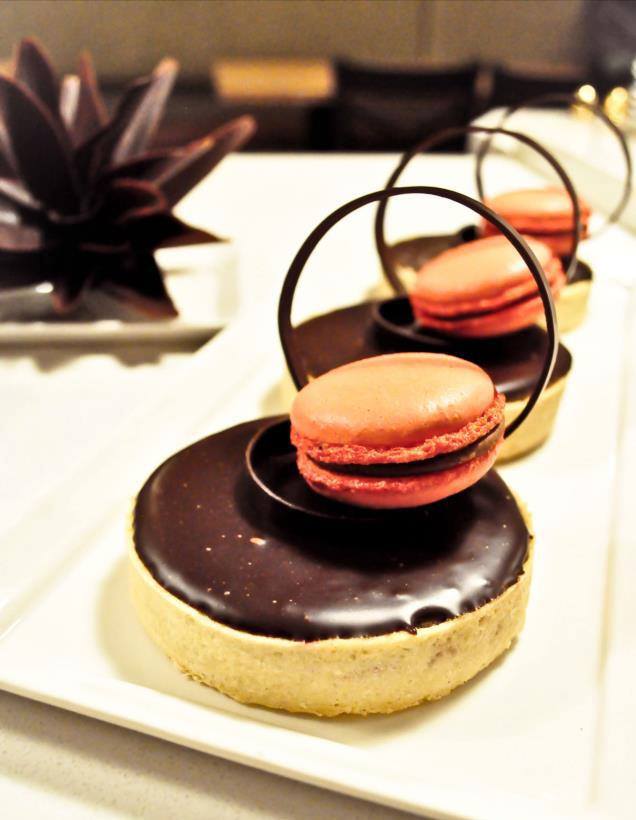 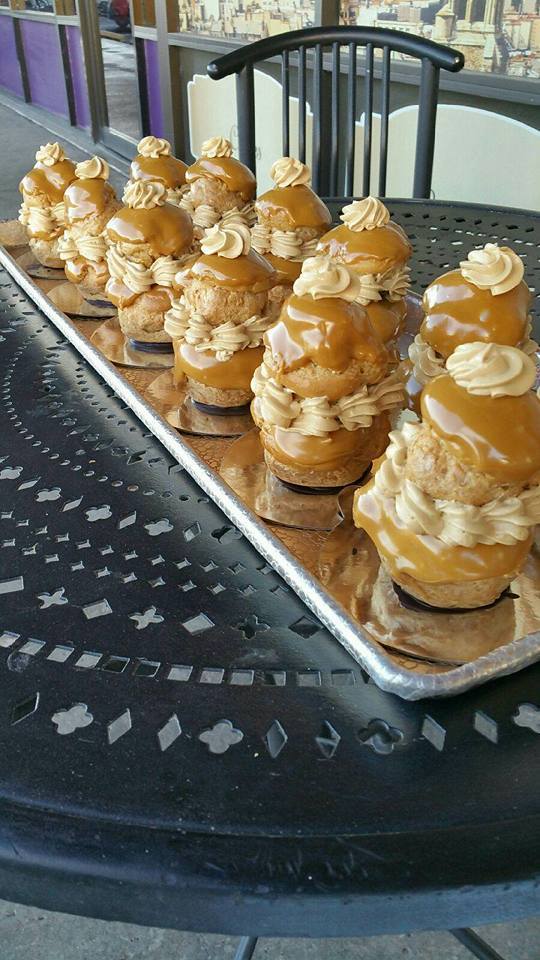 What are emerging products that you are using a lot of these days at The Stove LV’s restaurant?

Right now we’re coming into a chef’s favorite time of year! Fall is here so all of those really great foods are coming into play with everything coming out of the garden. All of the stone fruits are coming up, the apricots and peaches are coming into ripe form, we’re coming to the end of the tomato season, so we’re trying to figure out what to do with those and now we have all of our squashes. Lots of great Fall flavors are coming up… Apples will find their way onto the menu, in our pancakes and in our tarts. Also pumpkin… Of course we can not talk about Fall without mentioning pumpkin. So the pumpkin muffins and pumpkin tarts which we’ll be making. Those things kind of really capture the feeling of Fall which is a little bit more of that comfort food that we all love so much. We want to showcase that with our tarts and our pastries. All the way to our pancakes. We’ll have hatch green chilies working their way into our food as well because we’re in chile season right now. So all those things are dependent on how our menu changes and the reason for that is that these things are in harvest and we like to utilize those ingredients.

How would you describe The Stove LV’s cuisine in just a few words?

By using just a few words, I would say it’s the ultimate brunch spot!

Can you give us examples of products that are imported into Las Vegas?

A lot of our cheeses are imported but not only from out of the country but we’re also importing from other local areas, like some of our meats are imported from Bently Ranch in Reno. So we’re importing them into Las Vegas from outside but it’s still locally sourced, but also from neighboring states. We use Beehive’s coffee-rubbed cheddar cheese from Utah and it’s an outstanding product! And of course we’re lucky enough to live so close to California so we can get all that wonderful produce that’s coming out when it’s fully ripe and in season. We really try to incorporate as much as we can from California, Utah, Nevada, and New Mexico.

I noticed that you have pâte de compagne on the menu. Are there any other French style foods or techniques that you use that come from France?

Of course, I mean, we serve croissants all day long. We have croque madame sandwiches. A lot of people come here to order our croque monsieur. A lot of the cooking styles that we use here are not just strictly indigenous to american style cooking because that’s what we primarily do, but there’s always touches of Latin, French, Indian, and Middle Eastern as well as from Northern Africa. So everything’s kind of a culmination, but we all know that so many great techniques come directly from France. Our bechamels, our stocks and sauces, our chocolate mousse, the pastry creams and the crème anglaise that we make here everyday that all came from France and we all know that.

Growing up, what kinds of hobbies interested you? Who are your some of your favorite singers and favorite bands?

Well, I grew up in a small mountain town in Colorado, so I always enjoyed outdoor activities, such as hiking, mountain biking, skiing, kayaking, skateboarding and things like that. As far as music goes I have a pretty eclectic taste but as you know, my “bread and butter” has always been punk rock! Three of my all time favorites are The Queers, Screeching Weasel, and The Ramones!!! Punk rock has a fast pace so it’s great to listen to while working in a bustling kitchen.