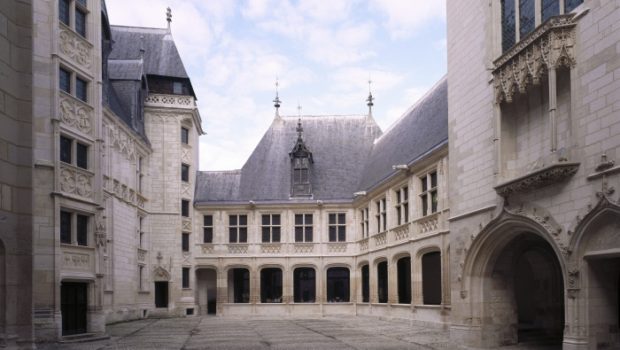 Published on November 17th, 2018 | by Isabelle Karamooz, Founder of FQM

The Grand House of Jacques Coeur

Palais Jacques Coeur: Construction of the Palais Jacques Coeur began around 1443. We believe the Jacques Coeur Palace was completed in 1450. In that day and age that was relatively fast. In 1451, Coeur was arrested and King Charles VII of France had the mansion seized. He never lived in his late Gothic style civil home, inspired by the early Italian Renaissance, with its grand entrances and galleries. At its core, it truly was his home. We see that it was inspired by his many explorations in the Middle East. He brought back lots of ideas in order to facilitate a better life in the palace, not only for the occupants but also the servants. It really was ahead of its time in terms of hygiene and the entire operation of the house. He wanted a palace worthy of a prince to represent his fortune. In 1450, his eldest son, Jean, was enthroned Archbishop of Bourges and there was a feast in his honor in the banquet hall.

French Quarter Magazine: Tell us about the interior, which expresses a great deal of emphasis on comfort and hygiene.

Palais Jacques Coeur: In terms of hygiene, Coeur installed a heat chamber that  functioned much like a sauna. The bathrooms were for the owners. For the servants, there was a row of latrines in the barnyard.
In terms of the private apartments, you’d have a hidden corridor that allowed one to get to the bathroom and the sauna in total discretion without having to pass by the stairways.  You see, he had even thought of that too. In the same way, further on, you have the bureau with a serving pass, which leads directly into the banquet hall. Coeur had already thought of making life easier for future servants.

French Quarter Magazine: We’ve talked about the interior, comfort, and hygiene. Please tell us about the fireplaces, some had been destroyed?

Palais Jacques Coeur: Yes, many fireplaces had been destroyed by the administrations. All fireplaces are very simple, especially those that have been restored. For those that are truly original, we have a carved decoration, such as in the cabinet of aldermen. It is entirely carved; it has an angel who carries an amulet with the motto of Coeur’s Heart: “Valiant heart, nothing is impossible.”

They’re practically in every room.

French Quarter Magazine: I see as we enter the first room there’s a monumental fireplace.

Palais Jacques Coeur: This fireplace has history. The Court of Appeals destroyed it, and it was rebuilt during a restoration campaign. It’s beautiful. It presents the regalia of Jacques Coeur: the Saint-Jacques scallop shell for his first name and the Heart for his last name, with rich and varied decoration.

French Quarter Magazine: When the palace was seized, was it still under construction?

Palais Jacques Coeur: In 1457, King Charles VII gave the palace back to Coeur’s children, and they sold it to the Turpin family and they sold it to the Laubépine family. Jean-Baptiste Colbert acquired it in 1679 and sold it to the City of Bourges.  It was transformed into the city hall, courthouse, and court of appeals. One after another, the administrations destroyed three-quarters of the fireplace mantels. It wasn’t until 1837 that Prosper Mérimée managed to have the building classified a listed historic monument. The state bought the entire palace in 1923 to make it accessible to visitors. Then, massive restorations took place. The first phase of the restoration took place between 1840 and 1846, the second in 1859, and the third from 1927 to 1938. The inauguration of the palace was held in 1938 with the presence of the President of the Republic Albert Lebrun.

When we opened our doors to the public, we started with two rooms at first, then three, and as we restore, we open additional rooms. Nowadays, we have the palace fitted with a little more than thirty rooms, but only fifteen are viewed at a time.

French Quarter Magazine: What kings, queens, or public figures left the biggest impresson on the palace?

Palais Jacques Coeur: I don’t think any public figure, neither king, nor queen left an impression on the palace.

Palais Jacques Coeur:King Charles VII was at Mehun-sur-Yèvre, the castle of his great-uncle.

French Quarter Magazine: Tell me a little bit about the guided tours; are there other things to offer within the palace?

Palais Jacques Coeur: Indeed, what really interests us is providing guided tour. We point out, of course, the carved decorations of the interior façade, which are rich in meaning. The tympanums above the carved doors is kind of signage that indicates what is through the door, you can access the kitchen, the tower of honor. Then there are the tympanums that highlight Middle Eastern features.  Visitors will find exotic trees, wool spinners, and frame weirs. Above all, we have on the one hand, a master who gives to a beggar, which is the sign of the generosity of the owner since we know that Jacques Coeur lent a lot of money to many nobles and even to King Charles VII. On the other hand, we have Jacques Coeur and his wife Macée in a ceremonial dress. As for the exterior, it’s more Gothic. We really find both: the end of late Gothic and the beginning of the Renaissance.

French Quarter Magazine: Visitors get a glimpse of the Middle East with the décor of monkeys and some other animals?

Palais Jacques Coeur: Yes, they’ll find it in many carved decorations. They’ll find the typical Gothic foliage, the leaves of curly cabbage and acanthus, in many decorations. Visitors see all kinds of animals from the Middle East, but also animals native to us and an imaginary tale.

French Quarter Magazine: Visiting the capital of Berry, in the footsteps of Jacques Coeur, we’re plunged deep into the Middle Ages. In a world of merchants and trading, we discover how intense the exchanges were with the rest of the world. Tell us a about the great voyage he made to  the Mediterranean in 1432, and about how he came back with the idea of trading with Damascus, Alexandria, Greece, Turkey and Italy.

Palais Jacques Coeur: In the Middle Ages, when Jacques Coeur launched his plans to trade, the monopoly was held by the Genoese and to trade by using the Mediterranean route automatically required a Papal authorization. He secured permission. Coeur was in Italy by 1430. Since he was in the process of learning about this functionality and making the right contacts, it wasn’t until after 1432 that he finally launched his first galleys from the ports of the Mediterranean in Montpellier and Narbonne. He left to establish trades with Damascus, Alexandria, Beirut, Rome and Constantinople. With the silk route in China, he also brought back silk.

French Quarter Magazine: So from there he started to develop trade and exchange?

Palais Jacques Coeur: Absolutely. He enriched himself very quickly, but it’s important to know that when King Charles VII inherited the throne, he inherited a palace, which was completely in ruins since we were in the final years of the Hundred Years’ Warand Coeur owed a lot of money to the king. However, there is the spirit of alchemy that we do not speak about it. This is a complex subject and if we start to enter into alchemy, the visit will last three hours. This subject must  be mastered to address it.

In 1427, Coeur was master at the mint in Bourges. He had been accused of laundering a small amount of the money from the royal bank: he put in a little less gold and a little less silver into the treasury in order to appropriate some of it. He had been condemned and pardoned by King Charles VII who later appointed him master of the mint in Paris. You must know that Coeur was the precursor to Fouquet. This means everything. That’s what I tell my visitors. When we reach a social level higher than that of the king, then there’s a moment when it can’t go any further.
Coeur also traded with the Middle East. He traded silver for gold because over there it was exchanged at equal weight. In the Middle East, they were very interested in money and that trade was very profitable.

French Quarter Magazine: Who was Jacques Coeur, this man who lived in France during the Hundred Years’ War, whose fate was extraordinary, and who was kind of a precursor, a model to which we could completely identify with?

Palais Jacques Coeur: Jacques Coeur was born between 1395 and 1400. We do not have a precise date of his birth. He was born to a petty artisan father who sold his furs to the court of Jean, Duke de Berry, and a mother who was the widow of a butcher from her first marriage. In 1418, Jacques Coeur married Macée de Léodepart, the daughter of the Bourges’ provost. Through this marriage, he received a dowry worth a fortune. In 1430, he went to Italy developed a project. He started his business between 1432 and 1441 and rarely visited France and even less in Bourges. He installed various trading posts and made contacts that allowed him to build his business. In 1441, ennobled by King Charles VII of France, allowed Coeur to return to the royal council. This also allowed him to become commissioner of the states of Languedoc, collect all royal taxes, and become the paymaster of the king. In 1443, Coeur wanted to show his new social rank and fortune by constructing a mansion. He bought a parcel of the old stronghold and on this parcel he had 100 meters of the old Gallo-Roman walls. In 1451, Coeur was arrested. King Charles VII accused him of Agnes Sorel’s murder, treason, and arms trafficking with the Ottomans.

French Quarter Magazine: All of this was fabricated?

Palais Jacques Coeur: For the murder of Agnes Sorel? Yes!

French Quarter Magazine thanks Isabelle Tostain for the informative tour of Jacques Cœur’s life and mansion.