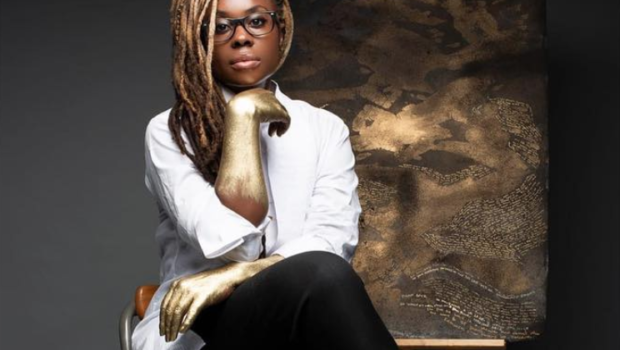 A first look at Adelaide Damoah’s body printing work immediately evokes Yves Klein’s 1960 anthropometries performances. Where Klein created paintings thanks to (white) women models used as living paintbrushes in his iconic Blue, Damoah’s work and her performances is a feminist response to his work since she becomes the creator and actor of the paintings while Klein’s models where passive assistants.

The young British artist of Ghanaian descent, combines African and Western influences that highlight social issues such as race, sexuality and identity and uses her body as a starting point. She defines herself as a painter and performance artist. “The painting and the performance are linked. When I’m painting I’m performing and when I’m performing I’m painting.” She combines body printing with texts in her mother tongues from Ghana as well as English and collage of images of the past and the present.

Her current career is the direct result of her personal journey: after graduating in Applied Biology, she went on to work in the pharmaceutical industry and during this time, was diagnosed with endometriosis- following many years of chronic pain. Damoah’s time spent convalescing allowed her the opportunity to develop as an artist like Frida Kahlo did and whose influence Damoah fully acknowledge.

Her African roots and their legacy will remain at the core of her next artistic journey “I want to keep pushing my work further”. A promising artist who has started to gain recognition and that we recommend to follow.

What are according to you the plus and the minus of having had a previous career before being an artist?

That’s a good question that I never had as is before! Obviously it depends of the career you had before. As for me I was working in the pharmaceutical industry and I had world class training in sales, speaking to people, presentations skills… and then the practice of speaking to doctors and the practice of being rejected and not being put off by that. All of that was a good training and set up to have the tenacity and the will to keep going when things are difficult. It helped me built a tough skin. In terms of negative of not being trained as an artist, things have probably taken longer for me to acquire the skills, even though I was practicing since I was 16. On the other hand, not having that training freed

me up and helped me thinking outside of the box. I do what comes naturally and feels right to me as an artist.

What were the steps toward that goal of being an artist?

It certainly was not in a day… in my naivety and not knowing anything about the art world, helped me in the sense that once I made my decision, I went to a business conference full of millionaires because it’s what I knew! So I went to connect in 2005, with my portfolio and business cards with the goal of selling works. I was naïve and had no idea if I was any good!

In doing that I met a businessman, Emile who thought I was ready to have a solo exhibition. I wasn’t sure at all that I was so I was shocked! From that point, we had a few meetings and before I knew it, he introduced me to people who helped me to design my website and we organized an exhibition. It was in the space of a menswear designer who was friend with Emile. The space was beautiful and looked like an art gallery. He got sponsors for the show, my sister helped me with the public relations and I got a lot of interviews and coverage from the press as a result. So that was my first step into the life as an exhibiting artist and from that point on, I continued with the attitude of I’m going to organize my own exhibitions, with of course the help of many friends.

You’re a member of the BBFA (Black British Female Artists Collective). How did you join the group and what is its mission?

That started in 2015 through my friend Enam Gbewonyo who is the founder of the collective. She invited me to join and since I really believe in collaboration and relations I said yes! Its goal is to provide a platform for female emerging artists of the diaspora to showcase their work and let the world know they are here.

You are one of  MTArt artists, founded by the French Marine Tanguy how did you start working with them?

That was the result of an interview. In 2017, I met with Roby Wilton who was working with Katrina Alexa co founder of AWITA (Association of Women in the Arts). While I was chatting with Roby, my assistant was chatting with Katrina. Once I finished the interview, we connected and soon started to collaborate. She helped me work on my communication among other things. One day she invited me to the opening of an installation made by MTART at the London Bridge where she introduced me to Marine Tanguy. We kept in touch and when I did my performance at Unfold Space exhibition for Frieze week in 2017, Marine came and told me she loved it. Within a few months we were working together.

How important is social media for you?

When I started as an artist, social media started to be really big and I was on Facebook and MySpace since the beginning. I was networking a lot through social media and I started to network more and more with artists and go to exhibitions. I started interviewing artists and gallerists as well. All that process of forming relationships with people and sharing it, really helped me and accelerated my journey. I also learnt a lot through Katrina Alexa who helped me to have a strategic approach of Instagram. I realized that in the art world, people want to look at your Instagram before your website. So it has to be aligned with your aesthetics and reflect your work.

You’ve just closed your solo show Genesis in London. What are your upcoming projects?

I’m working on different projects; one is a sculpture about the image of my great grand mother that I use repeatedly in my work. I’m also having interesting collaborations coming on: one with a science company and another one with an art company. Beside from that, I want to keep pushing my work further. I have recently worked on a series for an exhibition in Gallery Different in London, about Picasso’s Women. Most of the information about them has usually been negative in favor of Picasso, when he treated them poorly. The work I made for that show, was a bit different and I want to push that new technique further.

In term of subject matter, I’m thinking about the history of Christianity in my families in particular and the history in Africa in general and how it changed things there. I’m really interested in going back before colonization and dig into the spiritual practices then and where they are now. I’m not sure how long it will take me because it’s a wide subject but one that is important to me.