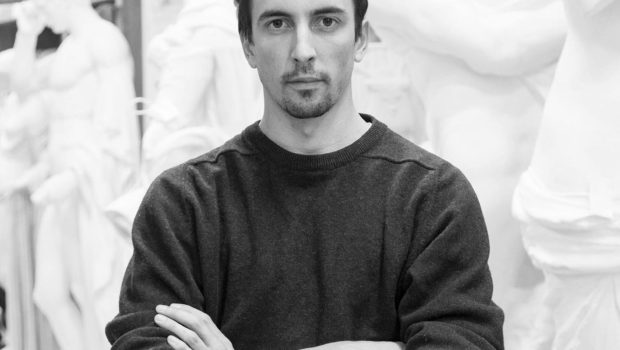 Artist Leo Caillard plays with our relationship to time through photographs and sculptures mixing different periods and invites us to take a different look at our current times. It is thanks to his path, first in science and then in photography, that this young artist developed his critical eye on our changing society. He created a first series, Art Games, in 2010 on the place of digital in museums. His following series, Hipsters in Stone, in 2012, confirmed his talent and gave him his breakthrough. His work succeeds in being appreciated by the public for his light and humorous approach and by art professionals for his more philosophical message about the mutation and the end of civilizations.

He was recently invited to exhibit in London with Damien Hirst and Jeff Koons, he was at Scope Miami for the Miami Basel week and will be in February at the St Raymond Museum in Toulouse. And if you land in Orly airport in Paris, you will be welcomed by  his photographs of artworks from the Louvre Museum which will be on display for the next 3 years.

A promising emerging artist, who talks about art, science and philosophy with passion and talent. We can’t wait to see his upcoming creations.

What were the key moments of your artistic path?

I has been in several stages: to begin with, I come from an artistic family, mostly in music, which opened me to an artistic sense. Still I did not practice art right away because I wanted to be an astrophysicist and so I have a background related to quantum physics. I was curious since childhood to see the world differently and up to my twenties, I did this thanks to objects such as telescopes or microscopes ie scientific objects related to optics. It is a rather Cartesian approach : not to be fooled by the senses and to see beyond what the real gives us. I then realized that what interested me in science was ultimately the poetry of science, that is, the artistic aspect of seeing things differently and giving a deeper meaning to things. I chose to do photography, always in connection with this goal to see otherwise. I went to Gobelins School where I could learn all the techniques, rather in an advertising approach.

I had my first jobs and it worked pretty well but soon enough I perceived that advertising would not be an end. My photos then turned around the Louvre Museum with this reflection about the relationship with time and questions about the apprehension of the image today. I loved to see people chasing photos in the museum and often missing out the essential. This inspired my first series called Art Game where I dealt with the place of digital in the museums and that allowed me in 2008 to take my first steps in the art world.

What is your view of all this technology available at our fingertips?

I find that the technology available today is fascinating and I think we are in a time of hope. On one hand there is the diffusion of knowledge, reflections, a whole stream of very progressive thoughts but in parallel the line in thin and the technology can spread fake news or manipulate the facts. As in any major change of society, you must first burn yourself with fire before mastering the tools. I think we are still at a time when we are burning ourselves with technology: internet and digital are very young. In my opinion, people who put a device between them and the artworks do so, in a certain way, to protect themselves from the art: they use their phone as an illusory means to see everything and in the end it prevents them from seeing.

You are particularly known for your Hipsters in Stone series. What is the story of this series?

After the series Art Game with the Louvre, I had in 2011, this idea to dress up the statues. The Louvre found the idea interesting but there was no question of touching the statues! So I designed the project digitally by taking pictures of the statues and pictures of models that had the same size and who posed in the studio: there was therefore quite a technical complexity. The series worked very well and I had a lot of media coverage. The Louvre liked the fact that I managed to modernize the image of the museum and they gave me access to the renovation workshops where I could make real dressings. At the same time, this series was seen by art galleries which started to sell my work.

What is your message through your work?

I have never wanted to go into politics because I do not consider it my role as an artist even if art often joins politics. I am someone who puts a lot of humor in my approach with a more serious question of substance which is: what makes a civilization collapse? Dressing statues is fun, but it’s also a reflection on the temporalities that meet. It is amazing to see that the past is catching up with us and that there is a form of neo-classicism in art today, as we can see with many artists like Hirst and Koons who started using statuary figures. This corresponds to questions around our changing civilization.

How was the transition to sculpture?

Following the success of Hipsters in Stone, I trained in sculpture in the Louvre workshops. I am from a technological generation and I have both a traditional and a technological sculpture. Today, sculptors have a foot in both techniques and we can arrive at forms of sculpture that we could not conceive without the technology. But the hand is what allows to have a special touch that the 3D will not have, because it is too clean.

You have been invited to the exhibition “Classical Now” at Kings College in London, with stars like Hirst and Koons. Can you tell us about this project?

This was my first museum exhibition. The Kings College in London, in partnership with the British Museum, questioned several artists on the influence of classical art in contemporary art. They invited me to do a performance and dress the colossal statues of the Kings College. These are statues that are huge so it was kind of a crazy challenge. I had an incredible chance to participate to this exhibition and be a kind of outsider.

What would be the project of your dreams?

If we go into the absolute dream, it would be to have a work that is sent into space because space does not have atmosphere or temperature, theoretically the work has an infinite lifetime… More realistically, I think I have an art that is still very young and I hope to come to an even stronger work around the theme of beauty. I read this sentence from Hegel in philosophy “the beautiful is a subjective truth that allows the other to become self-aware” and I think in art we have this desire to help people feel alive. If one day I come to that, touching people in that way, that would be the ultimate goal.

What are the public’s reactions and what does this inspire you?

I like the accessibility of my art it’s something that I always want to defend. It’s an art that will catch the eye of a 12-year-old, a more erudite person or not, and I like this idea of ​​having feedbacks that are not related to a specific target. My work is fun and it’s a good thing. I do not mind that some people stop at that. But I have fewer feedbacks from people who are capturing the second-line message and maybe I still want to go further in that direction.

Art has become highly democratized and yet it retains this elitist image that sometimes makes some people reluctant to visit cultural venues. How do you explain this situation?

In the art of the last 10 years, there is a return to the figurative which is often perceived as more approachable. I believe some people have a slight reluctance to art because the abstraction of the 50s / 60s with Pollock among others, is huge. And to get it totally, you need a strong artistic culture. There has been forty years of intellectual excellence in art, and people see art as a kind of elitism while it is also something that can be understood in an approachable way. I hope to keep this simplicity in my work to invite people to go further. Recently, I also heard this very true sentence from Warhol “the role of the artist is not to explain art, it is to make art“. Art is often an imprint of an era that is often somewhat out of sync with its times.

What projects do you work on?

My recent creations still combine the dialogue with the times, which is at the heart of my work, with the association of an element from the past and another from the present. I have a series of sculptures (Light Stone) that plays on the relationship between the durable stone and the immaterial light. The other series I am currently working on, is going towards the abstract, with marble circles that hold in an improbable balance. There is a dialogue between the gravity of the stone and the lightness of gravity. I reconnect with this metaphysical side of science…