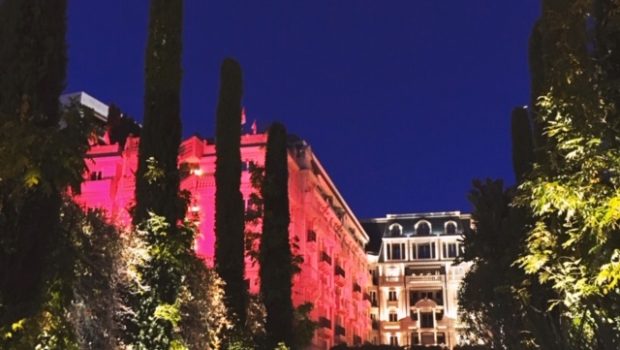 Summer is high tourist season along the Cote d’Azur and in the Principality of Monaco; hotels are booked, yachts pepper the coastline and crowds are seemingly everywhere. In the 19th century however, it was the winter months that saw this influx as visitors from northern climes flocked south to escape the cold. Though it seems almost impossible to believe now, many hotels and restaurants were entirely closed for the summer months.

Nowadays, visiting in the off-season provides a break from the sometimes hectic summertime pace and gives the visitor a chance to enjoy the area in a different light. My wife and I have been traveling to Monaco in the so-called low season for several years now and have come to appreciate the unique opportunities it affords. Having a trip during the holiday season can offer some distinct advantages; as the Principality is a year round haven for luxury dining and, of course, shopping. Moreover, a host of cultural activities and galas continue throughout winter. Just prior to the all the Christmas celebrations however, there is one often overlooked time to visit the Principality; on November 19th of every year, Monaco celebrates its national holiday, the Fete Nationale.

Known as the Fete du Prince in times past, the Fete Nationale is a seen as a celebration of the Monegasque national identity, the hard won sovereignty of the county and the unique and special place that the Prince and his family hold in the heart of citizens and residents alike. The date of the Fete Nationale was not always fixed and was determined by the feast day of the namesake of the current prince. November 19th became National Day when Prince Rainier III came to Monaco’s throne in 1949 as it is the feast day of St. Rainier. Prince Albert II chose to maintain this date and the tradition of a fixed Fete Nationale began.

The visitor to Monaco has before them a choice of luxury accommodations, there is no shortage of elegantly appointed rooms and world-class service. For this trip, we elected to pamper ourselves a bit and enjoyed staying in the junior suite at one of our all time favorite Monaco locales, the Hotel Metropole Monte Carlo. Originally built in the last quarter of the 19th century, the hotel has one of the best locations in all of Monaco. Steps from the Place du Casino and the iconic Café de Paris, the hotel is situated in the heart of the area that we know as Monte Carlo. Having underwent multiple refurbishments, the splendid hotel now boasts state of the art rooms that retain the old world charm that one associates with the grandeur of old Monaco.

After a long day of traveling, arriving at your hotel can be stressful, an experience that we have never once felt arriving at the Hotel Metropole. The staff to guest ratio is impressive and you feel immediately at ease on arriving; greeted with smiles, the doors are opened and the bags are whisked away to your room. After being ushered into the lobby we were invited immediately up to view the suite with guest services. Impressive seems not to do it justice; appointed with a roomy sitting area and lavish bath, perfectly in tune with your regal surroundings.

Aside from simply enjoying the pampered delights of the hotel itself, it is but a short walk to the delightful Japanese Gardens or the Grimaldi Forum, home to exhibitions and performances throughout the year. The Metropole shopping center is located just below the hotel and offers more than enough shops and cafes to occupy some critical shopping time.

The celebrations of the Fete Nationale begin a fireworks display over Monaco’s harbor, Port Hercule. In fact, if you visit Monaco in the summer you may know that the country hosts a pyrotechnic competition with teams from various countries competing to put on the best display. For the winner, the prize is, in fact, to be invited back to Monaco to stage the display for the Fete Nationale.

On the morning of November 19th, the day begins with a solemn church service, a Te Deum in Monaco’s cathedral of St. Nicholas. Dignitaries, government officials and members of the diplomatic corps join the Princely Family for the service. Immediately following this, crowds assemble at the Place du Palais for a parade involving the Prince’s guards and members of the branches of public service. The highlight, of course, is the appearance of the Prince and his extended family in the windows of the Palace. Flags wave and crowds cheer in support of the special affection the Monegasque people feel toward the Prince.

The official program of events concludes on the evening of the Fete Nationale with an invitation only performance of the Opera de Monte Carlo in the Salle des Princes of the Grimaldi Forum. When the guests have filled the Prince’s box, the Monegasque anthem is sung and opera season is officially underway.

The Monegasque national colors of red and white are displayed prominently during the festivities. Shops display flags, banners dot the balconies of residents and even the venerable façade of the Hotel Metropole is bathed in red and white. Being in Monaco for the holiday allows one to experience a sense of patriotism and national pride that might be a bit hidden at other times of the year.

Aside from the official program of festivities, we cannot overlook the simple pleasure of a staying in the heart of Monaco at one of her finest hotels. One of the great pleasures of our stay was indulging in a bit of the atmosphere of Monaco glam and people-watching in the lobby bar area of the hotel. A luxurious and intimate space, the lobby transforms throughout the day; from sleepy guests enjoying the first café latte of the day the space becomes a bustling lunch destination at midday. Indeed, even in the off season the wait staff have a packed house on their hands. Afternoon brings a second round of coffee seekers and then those stopping in for conversation and an aperitif, likely one of the many seasonal cocktail offerings from the superb bar. Into the wee hours this remarkable space sees a rush again post dinner or opera with those topping of the glories of the evening with a nightcap.

Though these may be just the highlights, we certainly had a spectacular trip. With our lovely accommodations at the Hotel Metropole Monte Carlo we simply could not have a finer base for enjoying the festive spirit, special events and unique experience of Monaco during the Fete Nationale.

Brad Payne works in the jewelry industry as a gemologist and specialist in precious stones. He graduated from the University of Glasgow in 2002 with an MPhil in art history. He currently serves as archivist to the honorary consulate of Monaco in Las Vegas.