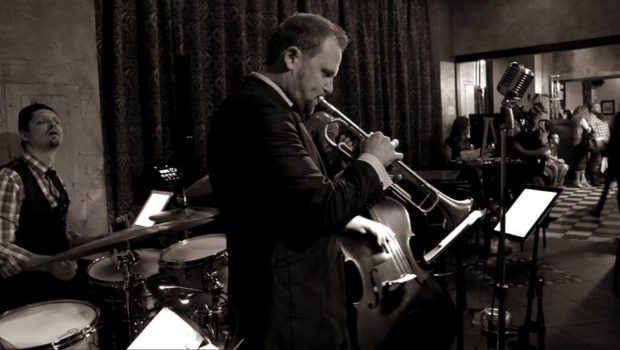 Published on June 1st, 2019 | by Isabelle Karamooz, Founder of FQM

Interview of Chandler Judkins, a tribute to Jazz Icons

Chandler Judkins, how and when did you decide to become a musician?

I actually never really made that decision. I was extremely passionate about jazz music in high school and when I began college I didn’t think it was practical as I come from a small town where everybody was traditional. I took theory classes even though I hadn’t declared a major. Eventually I found myself transferring to U.N.L.V. with a music scholarship.

I grew up in the 90’s and was into what we called “Alternative.” It’s now called “Grunge” (Nirvana,Nine Inch Nails, etc.).

Around 16 years, old on a whim, a small group of us band students drove to the city and saw Wynton Marsalis & the Jazz at Lincoln Center Orchestra and that changed my life overnight. I used my CD money to buy Benny Goodman & Dizzy Gillespie albums instead of Soundgarden & Pearl Jam.

I’ve since become well acquainted with Salsa music and other tropical Latin styles. So that as well as Big Band & straight ahead jazz are my preferences. I’ve since tried to gather a good stylistic understanding of all styles (except country music, admittedly).

I’m a jazz musician (and arranger) and I cater our sound to the venue. If it’s a jazz venue we will be more progressive in our approach whereas if it’s a wedding I’ll sing standards and my solos will be sweeter (in the box).

How did you get involved with The Chandler Judkins New Jazz Testament?

That’s been my quartet name for many years now. We did a lot of weddings and corporate events all over the strip and the Las Vegas area. I have enjoyed a few long term residencies. Namely at the Mandarin Oriental Hotel and the Chandelier Lounge in the Cosmopolitan.

How did you go about finding places to perform in Las Vegas?

Through my agency website www.lvweddingmusic.com and I collaborate with other agencies as well. My good friend Ron Cabildo with Definitive Talents was the one that booked us into those residencies.

Who are your jazz greats?

All the big names, especially the trumpet players; Louis Armstrong, Dizzy Gillespie, Clifford Brown, Miles Davis, Maynard Ferguson, Wynton Marsalis and a ton more. Also however, so many personal friends and amazing musicians who work full time in Las Vegas. I’ve learned the most from them.

A few were just magical musical moments which brought goosebumps. One time in L.A. playing with the Michito Sanchez Salsa Orchestra. I’ll never forget the energy of that. We played with so much passion. I taught at The Snow College Horne School of Music for 5 years and that was very rewarding, working with all the trumpet players. Playing the Salsa Congress with THE Tito Puente Orchestra was a night I’ll never forget and I was with Frankie Moreno for a few years and we had some amazing experiences as well. We were playing to hundreds of screaming crowds all over Vegas but primarily in the Stratosphere showroom. We also played many beautiful venues all over the country and Europe as well. And we filmed a PBS special (which can be found on YouTube or on PBS- « Frankie Moreno in Concert »).

Are there any upcoming projects and/or events that you would like to mention?

I am currently acting as a Music Manager for Carnival Cruise lines. This year I’ll be leading the band and managing the entire Music department on the next flagship, the Carnival ‘Sunrise’. It’s a great opportunity and I’m very excited.