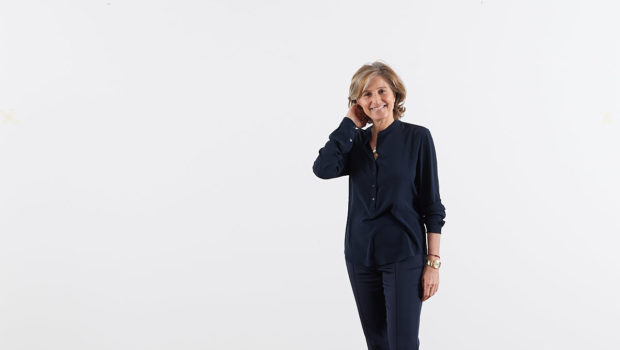 If the name of Dominique Lévy is not always known by the general public, it is immediately recognized in the art world where she belongs to the small club of the most influential gallerists in the world. It is therefore a privilege to be able to discuss with her about her career, the news of her gallery, the exhibitions of Pierre Soulages and her passion for art.

After having created her eponymous gallery in 2012, Dominique Lévy founded in 2017 with Brett Gorvy, Lévy Gorvy gallery. Based in New York, London and Hong Kong, the gallery represents artists from every continent, including Pierre Soulages, Martial Raysse, Yves Klein, Pat Steir, Frank Stella and Chung Sang Hwa. The gallery is specialized in private sales on the second market with a focus on the works among others, of Jean Michel Basquiat, Alexander Calder, Willem Kooning, Pablo Picasso or Andy Warhol. “I am interested in artists who are attentive to their time, in constant dialogue with history and responsible on the social and political levels. I am interested in those who have strong opinions and genuine practice” she confided recently in Artnet.

A career marked by her mentors

Dominique Lévy’s career started early, with the curation at 18 of a first exhibition in Switzerland, her native country. Yet she turned first to studies in political science before moving on to art history following her discovery of the writings of Raymonde Moulin, historian of art and pioneer of the sociology of art. “She was the first to reflect on this topic and she wanted to talk about how society influences art or vice versa, and how there is constantly a relationship and an osmosis between social political events and the reaction of artists. Initially, she assumed that events influenced artists, and ended up concluding that artists were at the forefront of political movements and announcing changing times. It fascinated me and I dived in for a year. “

Her career goes through Christie’s and Sotheby’s, where she worked with tenors such as Simon de Pury and François Pinault before becoming Art Advisor in 2003. Between 2005 and 2013, she joins Robert Mnuchin at L & M Arts and then becomes independent again and founded Dominique Lévy before joining her long time colleague Brett Gorvy.

Dominique Lévy had the opportunity to speak about the importance of her mentors during a recent speech at Sotheby’s Institute of Art where she advised students to “look for a mentor. (…) I count five to date: my father, Simon de Pury, Anthony of Offay, François Pinault, Bob Mnuchin. Each of these men helped me to build myself, to define myself. “

She has undoubtedly also marked these different mentors but to this question, she confesses with a laugh that she does not know what influence she may have had. “It’s an interesting but difficult question. What I know is that I always try to give the best of myself. “

An influence that she also cites is that of her mother, which allowed her to be exposed to art at a very young age. An influence that will have also touched her sister Fabienne Lévy who opens her own gallery in Lausanne in Switzerland this month. About this project Dominique Lévy explains that she has “a very different approach with a very committed gallery on artists who have a political and sociological vision of the world and who opens with an artist I really like: Andrea Galvani.”

“If you are curious, things come to you“

Her second advice during this speech was to stay curious because as she likes to emphasize “according to Buddhists when the student is ready, the master arrives” and add “if you are curious, things are coming to you.” For her part, she takes every opportunity to remain open “it’s about encounters, moments in time… it can be at the Venice Biennale, in a fair running to my stand, during a conversation with someone, or on Instagram at night before sleeping! They are constant encounters and what matters is to stay engaged and curious. ”

This curiosity led her to build her own collection. “My collection is my journey of the last thirty years” built by “impulse with anchors on questions of identity and questions about the relevance of painting.” She is also passionate about ceramics, which she collects and practices.

Ambassador of the artists

The Lévy Gorvy gallery is passionately committed to the artists it represents and Dominique Lévy tells us “I have always found that representing an artist is an enormous honor because we are their promoter and ambassador. It is a complete and total commitment which matters a lot to me.” The gallery is particularly committed to “being the ambassador of European artists (such Yves Klein, Pierre Soulages or Martial Raysse) without neglecting the American artists with whom we work a lot.”

About her gallery, Dominique Lévy says they want to be” contemporary in their means and traditional in their values. ​​” With spaces in several continents and collectors around the world, the gallery has of course embraced social media. “They are more of them and they became more and more important over the last 5 years, so it has become the most obvious and quick way to communicate. It’s a great tool.” However, the art dealer also perceives their limits “we have an indigestion of images and contacts and I think that we enter a period of clearing. We will have to focus on how we communicate to stay relevant” and of course she notes that nothing “replaces the experience in person”.

The gallery regularly hosts exhibitions and events that include music or poetry for multidimensional experiences. And as if to illustrate Roy Lichtenstein’s quote that art is a “dialogue between artists,” Levy Gorvy puts on exhibitions that emphasize this dialogue, such as Alexander Calder and Ellsworth Kelly. She shared with us that their next project in this lineage will connect Agnes Martin and Yves Klein in 2020.

Dominique Lévy represented for the first time Pierre Soulages in the USA in 2014, in collaboration with Emmanuel Perrotin, where the artist had not been exhibited for nearly 10 years. Today Lévy Gorvy is the representative of the artist and currently presents the exhibition Pierre Soulages: A century (until October 26) in their New York space ahead of Hommage à Soulages, his solo exhibition at the Louvre Museum in December 2019.

“The two projects complement each other and Alfred Pacquement, curator of the louvre exhibition is co-curator of the exhibition in New York, of which he wrote the catalog” indicates Mrs Lévy. The aim of these two events is “to honor Soulages in Paris and New York, which are the 2 transformative places for him. It is also to celebrate the 100th birthday of this man, who has known Picabia and Mark Rothko and whose journey was not only European or French.”

But what does the artist think of this avalanche of honors and the explosion of the price of his work over the past decade? (A canvas of the artist was sold $ 10,600,000 in November 2018, new record for the artist Ed.). Dominique Levy tells us “that he is very happy to be still relevant, recognized and to be appreciated today. He is a man who expresses himself with a lot of pleasure but who does not like giving interviews because his words are often reduced when he is a very deep man.”

The FIAC, Paris and Martial Raysse

A next important event for Lévy Gorvy will be their presence at the FIAC taking place from October 17 to 20, 2019 in Paris.

Martial Raysse, who shares with Pierre Soulages, the title of the most expensive living French artists, has been represented by Lévy Gorvy for 4 years. Dominique Lévy explains that during this event, two artworks will be presented “a work of 1966, which is one of his largest decomposed paintings (16 feet long), and which was a commission for the Aga Khan for a private cinema”. A work composed of modular Plexiglas panels, which will be exhibited for the first time to the public.

“It’s an incredible pop artwork, at the level of American pop,” she adds. American pop artists that the artists knew well during his stays in New York and Los Angeles in the sixties.

Raysse’s second work is a recent white epoxy sculpture of a revolutionary woman called Basta. “Martial is a very relevant artist who looks at society like no one and his Basta is a wonderful way to respond to the political climate in Europe.”