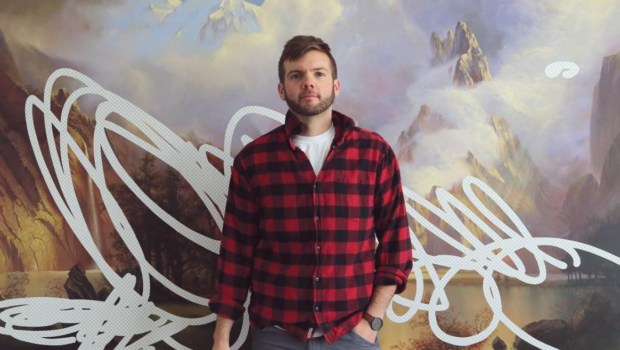 Shawn Huckins combines talent, humor and historical paintings with language commonly used on social media. In his series that he started in 2008, he is asking whether the devolution of language is making us less connected, which is the opposite effect of social media. His brilliant artworks are both skillful (they are all meticulously hand-painted) and clever and they invite us to reflect on our relationship with digital communication and our dependance on this constant connection. In a fast paced world, the artist takes a stand into taking the time to patiently create his paintings.

His latest series Happy Go Lucky is currently on view in a solo exhibition at Galerie Bessieres near Paris in France. In this series, he focuses on French artworks that were originally created by Ingres, David, Nattier, Gérôme, Cézanne or Renoir. The gallery being located on the island of the Impressionists (in Chatou) where Renoir painted his famous “Le Déjeuner des canotiers”, the connection with the past is complete.

I had the chance to have a chat with Shawn from his studio in Denver, Colorado where he is working on a busy upcoming schedule with no less than three solo exhibitions, a two person museum show, and several group shows and art fairs. He will be represented during the Miami Basel art week next December, in the fairs Pulse with K Contemporary, and Art Miami with Modernism and Duran Mashaal.

What is your goal with your artwork?

The ultimate goal with my work, and I think any artist’s goal for that matter, is to express an idea, or emotion that the viewer can have an interaction with.  Ideally, that interaction is positive, but I definitely receive my share of negative feedback. Positive or negative, it’s still quality interaction. I think getting no reaction at all is worse than any type of feedback. The difference with my work is that I hope to get my interactions through humor. Humor is a big part of my work and life practice as a whole. I never gravitated towards deep, dark, emotionally heavy work because that’s not written in my personality.If I can make some smile, then my goal as an artist is complete.

Your latest Solo Show currently on view at Galerie Bessieres near Paris, is inspired by French artworks. What is the story behind this show: How did you select the paintings you worked on ? How did you choose the name of the series?

Up until now, my body of work has been primarily focused on 18th/19th century American portraiture and landscape. This show allowed me to break the barriers of staying within American painting to explore artists from Europe with a focus on French artists. I select the works that best represent my style of representational painting. I have a hard time working in a gestural, abstract way, although I did tackle an Impressionist painting for my show (Père Fournaise by Renoir). The way I interpret the phrase ‘Happy Go Lucky’ is an overly optimistic person who sort of floats through life with no hardships. They seem to find luck at every corner and live a genuinely happy life. The text used in the paintings are the opposite of ‘Happy Go Lucky‘ as the text shows hardships in love, technology, and social norms.  The title of the exhibition is a sarcastic reference to the text/symbols used in the show.

Since you worked on French artists recently, is there one that is particularly close to your heart?

Without a doubt, Jean Auguste Dominique Ingres. He is a true master at capturing a person and his or her emotions evoked within that portrait.  The largest painting in ‘Happy Go Lucky’ is a replication of Ingres’ ‘Princesse de Broglie’ which I feel is the focal point of the show.  It was incredibly challenging taking on this particular painting and to capture the dress fabric, for example, all in acrylics.

In your earlier series Paint Chips (2008) you explored another theme, which made me think to the Color Charts of Gerhard Richter. Was he an inspiration? Or what was the source for you of this series?

I was not aware of Richter’s color charts while exploring the Paint Chip series.  In my early work, I painted old store fronts, abandoned parking lots, and weathering gas stations.  For a particular painting dealing with old, rusting gas pumps, I was trying to figure out which color to make the background.  I taped several paint chip cards to the canvas to help with that process.  When I stepped back, I wondered how would these paint cards look blown up.  They would be these huge abstract color field paintings that explored everyday color that we use for our bathrooms and kitchens.  I started this series back in 2008 and explored it once more in 2014.

What inspired you to create the first “historical” paintings ?

It began with a camping trip with my cousin.  Around the campfire, my cousin and I were talking about my career as an artist and he told me that I was a skilled painter, but that I couldn’t paint figures and when I did, they would be facing away from the viewer.  He was absolutely correct, as I found the portrait to be incredibly intimidating. I received a degree in the Studio Arts from college, but I didn’t focus on portraiture while in school. When I got home that weekend, I wanted to prove to my cousin (and myself) that I could paint portraits, so I began practicing by copying the American greats, such as John Singleton Copley.  I did a lot of studies and they were all terrible of course.  One of my studies slipped underneath a piece of trace paper that had the acronym ‘LOL’ written on it.  In 2009, the series ‘The American Revolution Revolution’ was born combining historical American portraits with current day digital language.

People seem to appreciate my work much more when they realize they are actual paintings and not digital interpretations.  The entire work is acrylic on canvas including the lettering.  Beginning with a blank, white canvas, the portrait and lettering is drawn out.  The text is taped off and the underpainting will begin.  Once the painting is finalised, I remove the tape to reveal the white lettering.  The digital part of the process is at the very beginning when I’m composing the idea and getting the composition and text finalized.

I’ve always wanted to work big… really big.  Not necessarily mural sized, but working a very large canvas. My studio only allows me to work up to a certain size, so ideally when I upgrade my studio in the next two years or so, I will be able to take on the challenge of very large, monumental canvases. I also think it would fun to do a collaboration with some of my favorite artists (ie, Matt Hansel, Vivian Greven).

What are your upcoming projects?

I have a very busy schedule coming up for 2020 with three solo exhibitions, a two person museum show, and several group shows and art fairs. I’m moving into a new body of work which deals with American prosperity and how fragile it is. Are we so ‘great’ that are we immune to destruction and extinction? The series will be a social commentary on how we live our lives by combining elements of today’s social norms with ancient Roman and Greek sculpture. The series is still in the infant stages of development, but I’m excited to debut it next June 2020 with a solo at K Contemporary here in Denver.