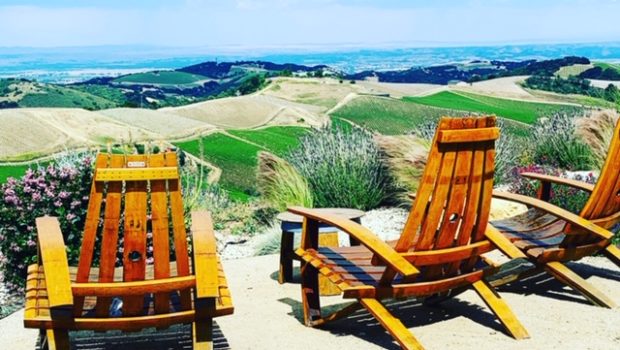 Published on December 4th, 2019 | by Elaine and Scott Harris

A day of wine tasting in the area offers many choices for first timers and experienced oenophiles exploring the diversity of wines produced in the Paso Robles region. The AVA has dramatic swings in climatic growing conditions due to the Santa Lucia Mountains buffering effect on Pacific Ocean maritime influence, creating a significant variation between evening and daytime temperatures. The warmer growing conditions along with the rocky, limestone or calcareous clay soils found prominently on the western side of Paso Robles provide the perfect planting and growing conditions for Bordeaux varietals. The most widely planted varietals in the region are Cabernet Sauvignon, Syrah, Zinfandel, Merlot and Chardonnay.

When speaking of great Cabernets most people’s minds immediately light up with the words Napa Valley but Paso Robles California located halfway between LA and San Francisco is gaining international attention as place of superb Bordeaux varietal distinction, especially in the world of Cabernet Sauvignon

Passing numerous vineyards along the way, we climbed higher and higher into the hills above Paso Robles, appointment secured we entered the palatial Daou Vineyards tasting room. Daou Mountain rises 2,200 feet in the Adelaida District. The clay soils, steep slopes and uniform exposure promote exceptional growing conditions that rival Bordeaux’s Right Bank. Renowned winemaking authority Andre Tchelistcheff concluded that the terrior was “a jewel of ecological elements”; alluding to its tremendous potential in producing world acclaimed wines. Owners and proprietors’ brothers Georges J. Daou and wine-maker Daniel Daou have combined their efforts in cultivation wines of legacy and lasting tradition within this epitome’s site. “This terroir is naturally inclined to produce wine of extraordinary staying power,” he added.

The view is expansive with a 360 degree sightline from atop Daou Mountain, vineyards below and a tower above where a historic bell hangs.  As it sounds it seems to call to those to come and learn of a family that truly respects Mother Nature’s bounty. Taking our seats, we learned Daou wines are a family affair with Daniel Daou at the winemaking helm and brother Georges Daou as proprietor and operations manager.  The brothers acquired the property in 2007 and have 212 total acres, 160 are currently producing wines. This family is continually cultivating a lifestyle around the vines while looking to innovate and improve wine making.

Most always there is a great story behind brilliant wines. The Daou story is inspirational and iconic. Fleeing from war-torn Lebanon in the early 70’s the family relocated to the south of France where the wine centric culture would later determine their future destinies.

The Daou brothers went on to pursue their education at University of California San Diego while following the American dream by building profitable tech focused businesses in the United States. Through stalwart determination and adherence to family honor, the brothers found great success from which they parlayed their astute business sensibility into a wine destiny beyond the transitory flight of immediate satisfaction.

We sat down with Georges Daou as we tasted through Daou’s highly pointed, award-winning line up. “This is definitely an American dream, but I shy away from that word because a dream has an end, this is not an end,” he said. “My brother is the wine maker; I am a life maker. I am interested in making your life better and I don’t care if someone is bigger or better. I am doing this for those around me, for my parents and those that were before them. I do this for them; their generation went through a lot. It is bigger than me and it will be here after I am gone. I don’t think people will remember me but what matters now is this moment. Our goal is to create a garden, a playground, a community where people will keep coming back. It’s a complex juggernaut. You must go to the abyss of this industry, but we know where we are going, and we want others to go with us on our journey. We make the best wine and we place it where we think our customers live and then we watch. It is not easy, because every bottle is handmade, and hand sorted. I can tell you we are very selective with the best grapes we can get; we select the wines and the barrels. The $25 bottle is made with the same passion and love as the $300 bottle,” imparted Georges. “What are you looking for? We have wines for every occasion,” he added.

Taking our seats overlooking the vineyard, we settled in to explore an intimate reserve tasting of the Daou Cabernet-based wines, including their highly coveted DAOU Estate Soul of a Lion, the 2016 Estate Mayote , the 2015 Reserve Aux and more.  Daou wine speaks for itself, it tells a story and that tale is never ending but always evolving. By honoring Daou Mountain for its hearty soils and precise atmospheric conditions, combined with astute business and scientific acumen, the Daou family is fashioning Cabernets that will endure with the test of time.

Exploring the world’s wine regions, you meet brilliant passionate people. Some you befriend for decades and others literally change the course of your life. In our case, winemaker Dan Tudor and Tasting room manager wife Bow, did all the above.

In downtown Paso Robles you will find the Tudor Wine Tasting room and should be a mandatory stop when in the area. Upon meeting Dan in2004, we have come to embrace his wine legacy as avid learners, frequently checking in at the tasting room for updates on his wine making journey.

The Tudor family has grown grapes and lavender for hundreds of years in a small village called Velo Grablje in Croatia. Dan has kept that tradition and started making award wining Chardonnay, Pinot Noir, Chenin Blanc, Gewurztraminer and merlot in 1982 in the Santa Maria Valley. In 1997, he discovered Monterey County’s potential as top-flight winegrowing region. Its vast microclimates and terroir allow for over 40 different grape varieties, but it was Pinot Noir that primarily captured Dan’s attention.

“The California pinot noir possesses a sense of beauty and precision-their flavors are not muddled or diffuse, but rather, what I like to call the flavor equivalent of the sound of a church bell in the mountains,” writes Wine Bible author, Karen MacNeil. Tudor crafts Pinot Noirs that sing to the palate in a clear convincing manner; a true reflection of the varietal.  He is very particular and uses only grapes from the finest Santa Lucia Highlands, Monterey County sites. Each row is farmed to very exact specifications in terms of water, canopy, leaf volume, fruit thinning, and shoot positioning. Traditional methods developed in Burgundy are used to handle the fermentations in small, hand mixed lots. Only the finest three-year dried French oak barrels are used in a way that complements the wine without over-powering the elegance and finesse.

While in downtown Paso Robles we just had to stop in and see yet another long-time friend and winemaker, Adam LaZarre at his namesake tasting room.  LaZarre is a veteran winemaker with nearly 20 years of experience behind him. Previously, he was the Vice President of Winemaking for Hahn Estates winery in Monterey County and was part of the team that created such superstar wines as Rex-Goliath and Cycles-Gladiator. He even has produced wines in Chile and Spain as well.

He is one of the most accoladed winemakers in California, with Best-of-Show wins at the most prestigious wine competitions in the world including the L.A. International Wine Competition where he is the only three-time winner. Additionally, in 2005 he was named “Winemaker of the Year” in the Sacramento Bee and was also named “One of the Top Five Winemakers” in the San Francisco Chronicle in 2006. Earlier in 2012, Adam was ranked #69 on IntoWine.com’s “100 Most Influential People in the US Wine Industry”.

LaZarre Wines is considered boutique but began in 2003 primarily as a high-end, single-vineyard Pinot Noir project and has grown to include such varietals as Merlot, Albariño, Sauvignon Blanc, Vin Gris, and Chardonnay. We tasted through his brilliant line up sourced from vineyards in Monterey County, Santa Ynez Valley, Santa Rita Hills, Paso Robles and Edna Valley. All of which are distinct and show a true sense of place. Lazarre’s 2012 Pinot Noir, 2010 Pinor Noir Central Coast Library Reserve, 2012 Albariño Edna Valley Library Reserve and 2016 Merlot Paso Robles are limited in production but are well worth seeking out.

After stopping in and tasting with legendary wine makers, it was time to visit a new winery for us and see what the buzz was all about. Back in Paso Robles’s hill country we found Shale Oak Winery and winemaker Curtis Hascall. Architectural firm Studio 2G designed the winery and tasting room taking the surrounding natural elements into consideration. These environmentally integrated buildings have achieved the LEED Certification “Gold“.

Before we even tasted through the wines we were impressed by the tasting room’s sleek modern feel showcasing reclaimed wood, decorative art and stunning stone and metal features. The soaring floor to ceiling windows allow ambient natural lightening while staying cool and temperate.

“Special care was taken to design the buildings and the site with great sensitivity to the existing environment,” said Hascall. “We have two vineyards, totaling a little over 70 acres. Both are farmed using sustainable practices, with careful attention paid to energy efficiency, water cleanliness and conservation, safe pest management and wild habitat preservation.”

Sitting on the patio on a ideal Paso Robles afternoon, Hascall methodically introduced us to these special wines. The Rose 2016 was a brilliant way to prepare our senses for the rest of the lineup with balanced acidity and notes of aromatic watermelon and guava. The 2012 Cabernet Sauvignon Broken Oak is a classic example of Paso Robles Cabernet Sauvignon, soft, round and approachable. The 2010 Petite Syrah library release demonstrated the great potential for agability. We were very impressed with 2013 KA; A robust wine that is a thoughtful blend of 25% Syrah, 25% Zinfandel, 25% Petite Syrah and 25% Petit Verdot. Our final wine was the deliciously pleasing KU 2013. The interesting blend of 50% Zin, 30% Syrah and 20% Grenache aged in 75% new French oak barrels is delightful in the glass with exceptional body and structure afforded by the dark bramble fruit soften by new French oak. Broken Oak wines tantalized the nose and the palate sip after sip.

Paso Robles always amazes us on every visit as they grow, develop and become a world leader in wine making.  In 2014, The Bureau of Tax and Trade approved the largest appellation proposal in U.S. history by establishing 11 new appellations within Paso Robles, giving more room expand and create stellar wines that reflect this area’s unique diversity. With new wineries developing, older wineries expanding and sophisticated wine makers preparing for the future, this ever evolving place of El Paso de Robles California, the pass of oaks, continues vintage after vintage to a be a for a wine region that does not bottle up its future, but is ever expanding.

Elaine and Scott Harris are journalists based out of Las Vegas, Nevada. They have more than a decade of informative articles and videos about wine, travel and food that has appeared in regional and national publications. They have been in the position of being city editors for the DailyMeal Las Vegas, Las Vegas Food and Beverage Magazine, and Luxury Las Vegas. They’ve published more than 200 YouTube videos featuring the best in the food and beverage industry. Elaine and Scott have created a reputation as a “one stop shop” duo by using many forms of social media, high resolution professional photography, and videos when on assignment to highlight their extensive relationships with premier experts in the food and beverage industry.