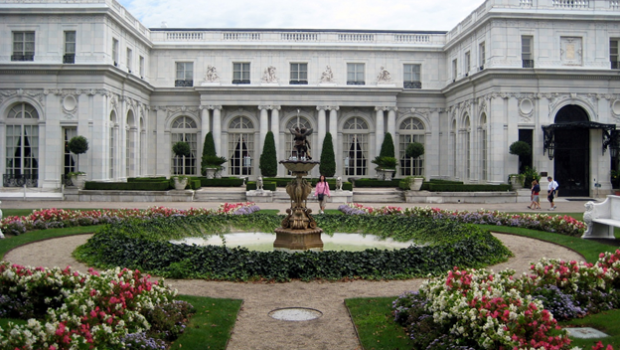 Let’s go back to the Gilded Age while visiting the city of Newport, Rhode Island

In the 19th century, the United States experienced an era of rapid economic growth called the Gilded Age. During this time, Newport, Rhode Island, became a favorite resort for American tycoons who built their summer “cottages” to escape the hustle and bustle of New York City. However, when we visit these houses, I can tell you that they are far from looking like cottages. The gigantic facades and even more sumptuous interiors housed a unique and selective class of magnates and business heirs. They nicknamed their mansions “The 400 club” because every week a gala was organized in a mansion whose ballroom was supposed to house 400 guests.

Today, these mansions make the history of the famous city of Newport. At the end of the Gilded Age, many fortunes were lost but thanks to Newport Mansions Preservation Society, many mansions were preserved, protected and opened to the public.

I then invite you to discover these magnificent mansions and this exceptional time. I had the opportunity to visit four of them.

The most famous and grandest mansion of Newport is The Breakers, built by the wealthy industrialist Cornelius Vanderbilt. The Breakers was named so because of the waves breaking on the rocks under the back lawn.

The mansion has 70 rooms inspired by Italian Renaissance style palazzo. It was built by architect Richard Morris Hunt and decorated by Allard and Sons of Paris. There are many reminders of the Louis XIV and Louis XVI style. Moreover, it was very modern for its time: electricity, hot water and salt water were installed which was exceptional. 40 servants were at the service of the Vanderbilt family and a French chef was cooking French menus (obviously!).

Most of the beauty of The Breakers lies in its details. Mythological elements shine almost everywhere with symbols like dolphins and acorns (the symbol of the Vanderbilt family). Gilt is present in almost every room of the mansion.

The Breakers is a must see while in Newport. The audio guide available in several languages is full of anecdotes and testimonies of the family or servants.

The Vanderbilt family also owned another mansion called Marble House, built by the same architect and inspired by Le Petit Trianon of Versailles in France. At the end of the garden of this summer “cottage” (right!) was built by the owner, Ava Vanderbilt, a Japanese tea room. Marble House is, as you can tell, built in white marble. Jules Allard and Sons was again in charge of the decoration. There are many inspirations and French architectural replicas such as the chimneys of the Salon d’Hercule in Versailles or the Jacques Coeur house in Bourges.

Marble House was also used as a setting for the movies The Great Gastby or 27 Dresses.

Newport’s other most popular mansion is The Elms. A “Servants’ Life Tour” is offer and show the less-known side of Newport’s mansions life. It was the summer residence of Edward and Herminie Berwind, who made their fortune in the coal industry.

The mansion is inspired by the Château D’Asnières and the interiors and furniture, also designed by Allard and Sons from Paris, served as a setting for the Berwinds’ collection of Renaissance ceramics, 18th century French and Venetian paintings and oriental jades.

Finally, Rosecliff is a vast H-shaped French pavilion designed specifically for entertainment. Tessie Oelrichs, an heiress and her husband Hermann Oelrichs, a merchant navy steamship tycoon, bought the house that has always been used for lavish parties. Today, Rosecliff is still one of Newport’s most popular venues for weddings and events. The former owner, a horticultural enthusiast, grew thousands of roses at Rosecliff and its gardens along the Cliff Walk (a breathtaking cliff-side trail) are famous.

Scenes from several movies have been shot in Rosecliff, including The Great Gastby, True Lies, Amistad and 27 Dresses. It was home to one of the most famous Gilded Age celebrations in Newport, the “White Ball” (Le Bal Blanc) in 1904. Oelrichs made sure that the event lived up to her name.

Newport was a city of a booming industrial economy, long before it was discovered by the richest in America in the 1800s. It has remained preserved and authentic to our delight. The city has also long been home to the America’s Cup regattas.

Allow one hour to visit each mansion and I can assure you that each one is worth a visit.

Delphine Rouleau is French and moved to Rhode Island with her family in 2012. Lawyer in Quebec then corporate lawyer in France for 10 years, she had to retrain and created a blog to publicize this tiny state that is Rhode Island. She is also the author of a travel guide to southern New England. His blog: http://www.livefromrhodeisland.com His guide Between Boston and New York - Discovery guide of southern New England: https://gumroad.com/l/entrebostonetnewyork