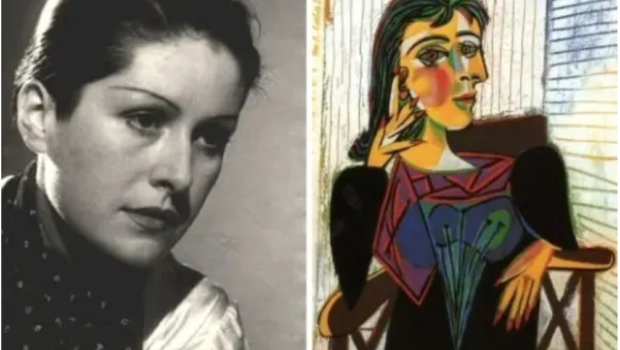 The name of Dora Maar evokes for most of us, the name of the muse of Picasso. He made her famous thanks to the paintings in her effigy which are among his most famous.

Yet Dora Maar was more than a simple muse: artist, photographer and painter, she influenced and advised Picasso. But her work has remained in the shadow of her illustrious lover. It has been rediscovered today, notably with a retrospective first at the Center Pompidou, then the Tate Modern London and finally the Getty Center in Los Angeles (date to be confirmed).

This book was born from an extraordinary coincidence.

Brigitte Benkemoun buys a vintage diary from 1951 on ebay and discovers an address book with famous names such as Aragon, Cocteau or Lacan. Her investigation leads her to Dora Maar.

“Even before I identified the owner of the address book, I knew it would be the subject of a book. The world in those 20 pages is so fascinating that I was sure I had an incredible subject. I even had in mind the structure of the book, and the certainty that the notebook had to be its backbone. ” says Brigitte Benkemoun.

The book therefore begins with the story of this investigation to identify the owner of the book. “When I discovered her identity, I searched the internet to read as much as possible about her. And very quickly I came across this hallucinating sentence: “she was the lover and the muse of Pablo Picasso, a role which has eclipsed all of his work.”

It is so unfair to be so crushed by Picasso down to posterity, that of course, yes, I really wanted to get her out of this rut.

With this motivation, the author will investigate for 3 years and the book is built around the people in the book. A new extraordinary coincidence, she learns shortly before the release of her book that the artist will be the subject of a retrospective.

With this book, Brigitte Benkemoun takes us on a journey through time, bringing us to Paris from the 1930s to 1950s and immerses us in the intimacy of Dora Maar. The Franco-Croatian artist is 28 years old when she provokes her encounter with Picasso who is 54. He is then married to Olga Khokhlova and his mistress Marie Thérèse Walter has just given him a daughter, Maya. Dora is a photographer recognized for her talent and a woman who shines both for her wit and her appearance. Picasso is seduced.

The author indicates that she “discovered a daring young photographer, emancipated, cheeky, beautiful, talented. She was not 30 years old at the beginning of the 1930s and she left alone to report across Europe. She settles in the most deprived districts of Barcelona or London to witness the disastrous effects of the crisis of 29. And she is not afraid of anything. ”

A woman of many faces

Dora Maar is also a “submissive and tormented woman with Picasso.” Her relationship with Picasso will last almost 10 years. He will leave her for Françoise Gilot and Dora Maar will have a depression from which she will partially recover. The young woman who was a “very committed to the left, anti fascist activist, close to the surrealists, later becomes an old bigote, close to fundamentalist circles, and undoubtedly anti-Semitic since Mein Kampf was found in her library.”

These contrasts have motivated Brigitte Benkemoun to research to better understand her and beyond the artist, we discover a multifaceted woman who crosses the destinies of other characters, some just as fascinating, and others simpler.

The book met with great success and was nominated for the Renaudot Prize in 2019. Then the Getty Publications bought the rights for the publication in the USA and Canada which took place in May 2020. A publication also supported by the French Ministry of Foreign Affairs and the cultural service of the French Embassy in New York which supports French authors and sometimes contributes to the cost of translation.

In addition to her writing work, Brigitte Benkemoun is the owner of the Villa Benkemoun, in Arles, whose mission is to be a place of artistic encounters.

A family house built by the architect Emile Sala, listed as a 20th century heritage, emblematic of the 1970s. “It reflects those pop, free, joyful and optimistic years. I believe there is not a single straight wall or you really have to look for it in the middle of concrete curves and eccentric volumes,” indicates its owner.

Her objective is to make it a place of multidisciplinary meetings and exchanges by hosting exhibitions related to the history of the house and its location. “Arles being the city of photography, I would like to organize meetings between photographers and writers, or welcome photographers in residence. It’s all a question of encounters and crushes.”

Just like the writing of this book, born from a synchronicity and the meeting between Dora Maar and the author.

One Response to Finding Dora Maar with Brigitte Benkemoun