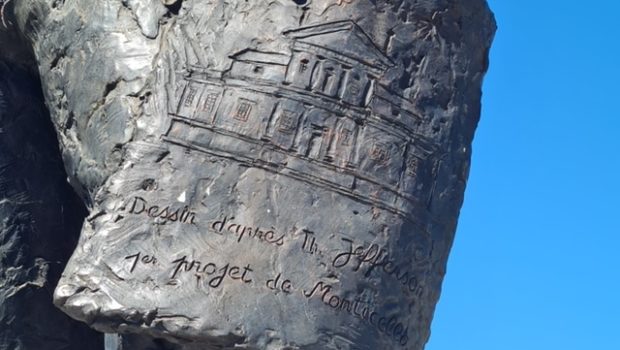 Thomas Jefferson, the President who has a Long History with France

Grandiosely and distinctly exhibited alongside the right bank of the Seine river, facing the Musée d’Orsay, one of the richest and most beautiful of Paris, and eyeing the Grand Chancellerie de la Légion d’Honneur (the Great Chancellery of the Order of the Legion of Honor), Jefferson, is magnificently rendered in statue.

In his left hand the statue holds a drawing of Jefferson’s Virginian plantation, Monticello, where he lived his last years until his passing in 1826.

Here is a very brief summary of the life of a great American hero.

Now we must delve deeper into the connection between Thomas Jefferson and France.

There’s a good reason why his statue is displayed in such a symbolic location in Paris, one of honor, power, and art: Jefferson has a long history with France.

There was a looming question: France was battling for a considerable colonial empire on the North American continent. Until 1763, France ruled over Louisiana, a territory located on the eastern and western banks of the Mississippi river from its source to the river mouth. After many conflicts with the Americans, the French were left with a small territory along the right bank. Meanwhile, for the United States, France’s presence was becoming unbearable. The young nation pushed its borders to the west and to the south and Louisiana quickly became an obstacle and risk for conflict.

In the United States, the militants were numerous and wanted to quickly fix the problem using weapons. The French revolution and the subsequent destabilization of French institutes seemed to create a clear path for an armed “annexation” of Louisiana. It must be said that the relationship between the young American nation and the revolutionary France was not a good one! They even escalated to a succession of naval battles until an agreement was settled in 1800.

This is where Thomas Jefferson intervenes.

During this time, he was serving as George Washington’s State Secretary. Knowledgeable about France, rather than agreeing with the Senate who was ready for war, he preferred to open room for negotiation. He ordered the current American representative, Robert Livingstone, to get in contact with Bonaparte. The ambassador, assisted by Vice President Monroe, was commissioned to repurchase New Orleans for 10 million gold francs.

Besides, Bonaparte needed money to finance his campaigns. He was especially aware of the fact that it would not be possible for France to defend a colony so far away. The solution proposed by the Americans then should easily please him, except of course, this was not how it happened!

When Livingstone and Monroe met with the French negotiators, they were surprised with a proposal of purchasing the entire Louisiana territory, including New Orleans for 80 million!

The agreement concluded on December 20th 1803.

This agreement allowed for improved relations between the United States and France, and President Jefferson was honored by plaques placed throughout various buildings in Paris, celebrating the great democrat and defender of freedom.

In the center of the “Place des Etats-Unis” (United States Plaza), the Jefferson Square illustrates the Franco-American alliance for the independence of the United States.

This article was translated in English by Mirthia Prince Figuereo. 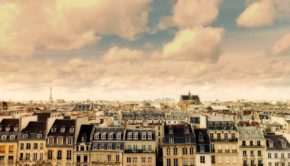