On the current site of Hollywood Boulevard in Los Angeles once stood the home of the artist Paul de Longpré. 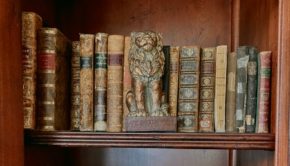