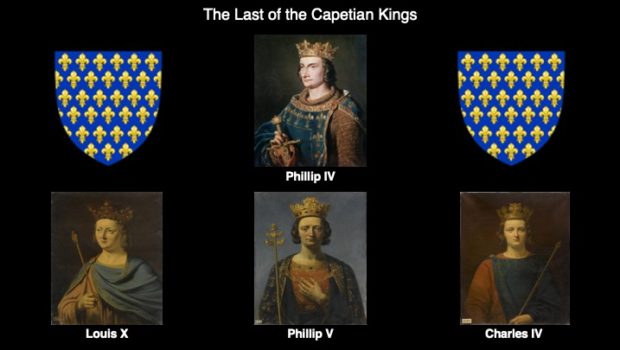 The Fall of the Capetian Dynasty: The Unknown Royal Family that Changed Modern France. Part IV – No Girls Allowed

King Louis X was dead – the result of a particularly strenuous game of tennis. His first-born was a girl, but worse still, she was of dubious legitimacy. As disastrous as this was to the House of Capet, hope was restored when his wife gave birth to a boy, John I. Phillip V, the boy’s uncle, would rule as regent until he reached majority. He would get all the best in training and education and the dynasty would persevere. All the hopes for stability of an entire nation rested with the newborn, John I.

John I died 5 days later. So that whole plan was out the window and the ever-dwindling Capet Family had to think of a better way to continue this definitely-not-cursed royal line. The easiest solution was to simply crown Joan I, the daughter of Louis X and his wife Margaret, as queen. The problem was that there was a fair chance that Joan’s real father was a nameless albeit probably very handsome knight, long since executed for his dalliances with a princess. However, as there was no way to prove this, Joan and her supporters had an incredibly strong claim to the throne. Phillip V should have been next in line so likewise, there was no way he was going to let his illegitimate, niece take his turn on the throne.

So, he did what any aggrieved prince should do when facing a problem that can’t be solved through fairness and logic; he brought it before the Estates General. The same legal body which his father had formed-meaning they could clearly be objective and fair adjudicators of the law. The Estates General agreed that a woman, especially one who might be illegitimate, was simply not able to rule. According to an obscure legal precedent, which had not been enforced in centuries, the illustrious, all male, Estates General found that “no portion of the inheritance shall come to a woman; but the whole inheritance of the land shall come to the male sex.”[1] Meaning that not only could Joan never inherit the crown but that succession would forevermore pass to the nearest male relative in the male line. This decision, small and insignificant as it may seem now, would result in a war that would last for generations. For now though, Phillip V could take the crown and there was little anyone could do to stop him.

It seemed good at the time. Phillip V was healthy, happily married, and already had a daughter. Now all he needed to do was have a son and the Capetian dynasty could get back on track. Phillip seemed to be a shrewd king with ambitions and the ability to pursue them. He was popular with the people and with the nobility of France until he had the audacity to attempt fiscal reforms that would help the French peasants. He even made progress in healing some of the festering animosities with his Sister Isabella’s husband, Edward II, the King of England. Had he remained in power, it is likely that France would have remained stable and strong but the curse of Jacques de Molay struck again and 8 years after taking the throne, Phillip V died.

Charles IV, the last of Phillip IV’s sons rose to the throne in 1322. Though France was once again having to crown a new king, Charles seemed able to rule in place of his brother, his other brother, and his father. As a young king with health and vigor, married to a wife with plenty of childbearing years ahead of her along with all the pedigree required for a Capet, he represented hope. He represented the possibility that at long last France would have a King who sat on the throne for more than 10 years. More importantly, he represented the hope that he would have a son and that prince would save the Capetians from extinction. It should surprise no one at this point that, 6 years after his ascension, Charles IV also died. For the family, this was an absolute disaster. He had been the last of the Capet line. The final son of Phillip IV. There were no more direct Capet descendants left to take the crown. Well, there were no male Capets left. There was Phillip IV’s daughter, Isabella. But didn’t they just decide that the title of king cannot pass to a woman? Isabella didn’t agree and she had a plan to make sure the power of the French crown fell into the right hands; hers.

This article was translated in French by Marie Pireddu.