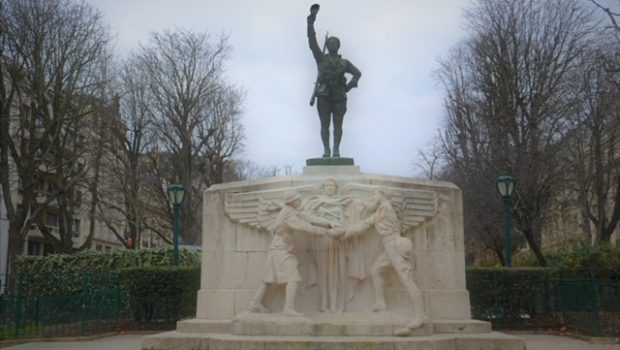 Do you know the real history of Paris’ streets: the United States Plaza

“We must give honor when honor is due”

A couple of steps away from the Place de l’Étoile, from Champs-Elysées, and from the Seine, if there is a spot to start retelling the “history of the United States as told by the streets of Paris”, this place would be the United States Plaza!

A beautiful rectangular shaped plaza, in the center lies what is considered a “square” in France, a small garden area filled with statues of significant men… all American of course.

The square, also as rectangular as the Plaza, has an illustrious name: that of President Thomas Jefferson (1743-1826). A small plaque reminds visitors that he was a founding father and took part in drafting the American constitution in 1776. He was also the United States Ambassador to the France from 1785 to 1789 and would continue on to become the 3rd president of the United States from 1801 to 1809. The square is named after him, but his statue is nowhere to be found within its limits. But of course Paris did not forget him, Jefferson’s statue can be found along the Seine riverbank, a few steps away from the Musée d’Orsay et Palais Bourbon, seat of the National Assembly (equivalent to the US House of Representatives).

So where does this plaza get its name from ? As it is often in Paris, it happened due to curious circumstances. In the French capital, streets are given names for sometimes bizarre reasons, for strange stories, or simply for the convenience and the respect of residents. This is the case with Plaza of the United States.

We must now go back and do a history lesson.

The plaza is a recent creation in Parisian history. It began its urban life in 1886-1887 and until the area was simply underdeveloped and there were very few buildings constructed.

Today, the United States Plaza is located in the 16th arrondissement, in the Chaillot neighborhood. Parisians love to say that Paris, like Rome, has seven hills. The Chaillot hill is one of them; the steep slope continues from the banks of the seine to the plaza itself. In the 16th century peasants tried to settle on the slopes of this hill, taking plots of land from the forest, today known as the Bois de Boulogne, and cutting down trees to make the pebbled ground appear “chail” in old French which gave way to its current name of “Chaillot”.

Up until the 18th century, this part of the hill did not experience much activity, meanwhile a little further down, right near the Seine, beautiful royal residences were bring erected which were then demolished as part of Napoleon the first’s vision of constructing a chateau in honor of his son.

The land nearby the United States Plaza did not develop into its current states until the 19th century when “fire pumps” were used to bring up water from the Seine up the hill in order to fill the neighborhood fountains on the right bank of the Seine.

In the political current of the 1880s the reservoir was removed and new streets were designed. This is when The United States Plaza enters the story. There was a small waiting period, due to another name originally being chosen: Place de Bitche (Bitche Plaza) in honor of the town by the same name who valiantly resisted the Prussians during the Franco-Prussian War of 1870.

During this same time, several pushes were made to have the plaza be named after the United States: Levi Morton, the American ambassador decided to move his residence and then a few offices, leaving his cramped offices on rue de Chaillot.

A small linguistic difficulty then arised: the Plaza carried the name of Bitche, which, when pronounced in English, does not lead to a flattering nor appropriate term. The State department took offense, and the ambassador became concerned shares his worries with the governing official of the Seine area. This official, worried about maintaining harmonious relations with the United States, suggests changing the plaza’s name to its current title. The honor for the town of Bitche finds a new home in the north of Paris.

The United States Plaza is a true concentration of history and remembrance in Paris.

At the top of Jefferson square, history is very much present. First, a magnificent sculpted group precedes the square, representing Lafayette bringing France’s aid to George Washington. This group, designed in a heroic style, was commissioned by the United States to Bartholdi, designer of the Statue of Liberty.

At the bottom of the plaza, a bronze statue of a legendary figure stands elegantly and sublimely: a glorification of the American volunteers that served alongside France during World War I. This statue, erected on July 4th 1923, carries the likeness of the American poet Alan Seeger. An engaged volunteer in the French Foreign Legion, Seegar succumbed to his death in the Battle of the Somme on July 4th 1916. His name is engraved on the backside of the monument alongside the other 23 Americans who died as part of the Foreign Legion.

On the sides of the pedestal, two of Alan Seegar’s works are engraved: one side writes, “They did not pursue worldly rewards/they wanted nothing more than to live without regret/brothers pledged to the honor implicit in living one’s own life and dying one’s own death,” and the other side states, “Hail Brothers, Goodbye to you, the exalted dead! / To you, we owe two debts of gratitude forever: the glory of having died for France, and the homage due to you in our memories.” The American poet intended that these lines were to be read before the statues of Lafayette and George Washington in Paris on May 30th 1916, Decoration Day (later known as Memorial Day).

United States Plaza is also a memorial: there is a special plaque memorializing the victims of September 11 2001.

In the square, one can find two other statues, both solemn but less heroic (but that’s on you to judge!!). The first statue was inaugurated in 1937 and honors American ambassador Milton T. Herrick. The other statue was erected in 1910 and honors an…American dentist who was a pioneer in anesthesia, Horace Wells (1815-1848).

In this ensemble of busts, there is still one figure missing. This of course is the replica of the Statue of Liberty reduced to 1/5th of its size. Gifted to the City of Paris by the Committee of Americans in Paris, it was inaugurated on May 13, 2885 and installed in front of the American embassy. In 1888, she was moved to the Seine, finding a home on L’Ile aux Cygnes (Island of Swans) where she still rests.

In the 1880s, the area surrounding the plaza saw the construction of many sumptuous private mansions that made it one of the high places of Parisian luxury. The United States Plaza is surrounded by an astonishing series of buildings, one as magnificent as the other.

This article was translated in English by Mirthia Prince.