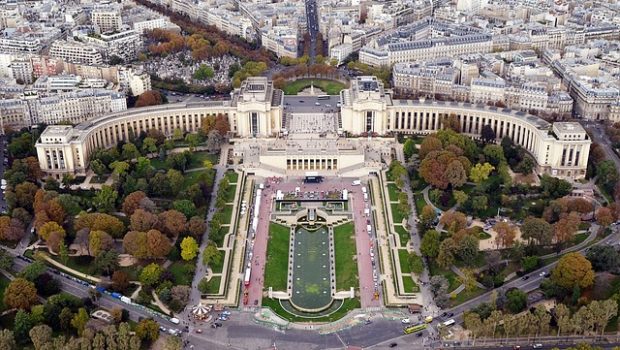 History of the Rue Benjamin-Franklin (Paris)

Rue Benjamin-Franklin is both recent and ancient. Located in the 16th district of Paris, the street is long and complex, branching off in two sections, high and low, ending in a strong slope all the way to the Seine.

It belongs to the Muette neighborhood whose name may have originated from a hunting lodge that Charles IX, king of France from 1560 to 1574, used to own. The street is plain enough but complex because, after being named Rue Franklin, it was renamed Benjamin-Franklin in 1988, 200 years after being created.  Its plaque has a very Parisian look, white letters on dark blue enamel and concisely introduces the man (1706-1790): physicist and American Statesman.

Benjamin Franklin does not require any introduction to the American audience, nor a description on his importance in the scientific and political American life. Let us focus instead on the French part of his existence, starting with this amusing statement. Franklin, becoming later Benjamin-Franklin Street, was named to honor the political man, diplomat, one of the Founding Fathers of the United States but also because he used to live in nearby Passy.

Actually, the American wise man, sent to Paris to gather help and subsidies for the “Separatists”, was welcome in 1777 in the Hotel de Valentinois, a beautiful estate overlooking the Seine, that belonged to a French supporter of the American cause: Jacques-Donatien Le Ray de Chaumont, Grand-Master of Water and Forestry. He resided there until 1788. The Hotel de Valentinois, partly destroyed early in the 20th century, would sit today in Raynouard Street, half a mile away from Benjamin-Franklin Street. What remains of the Hotel bears a commemorative plaque honoring the installation of the very first Parisian lightning rod created by the American scientist.

Franklin Street, which would be so named in 1790, was mentioned in 1730 on the maps of Paris and its surrounding, as a path meandering around the property of a convent, “le couvent des Minimes de Chaillot.” The layout of the street was set in 1788. It goes across the convent and took its name for a short time “rue Neuve-des-Minimes.”

The death of the great man, in 1790 in Philadelphia, resulted in three days of national mourning in France, as decided by the Constituent Assembly created in 1789. In 1791, the “rue Neuve” was renamed Franklin after the one who had honored France with his presence.

Paris grew, absorbing in 1860 the hill of Chaillot and its surroundings. On its sometimes vertiginous slopes, homes, schools and prestigious public buildings were progressively built.

Fellow Franklin would have been proud of the old rural path becoming a street adjoining the Palais du Trocadero which then hosted the famous Musée de l’Homme. The Palais overlooks the Seine and provides an exceptional view of the Eiffel tower and the Champ de Mars where, for the longest time, the most prestigious scientific and technical exhibitions would take place. It borders the Franklin Street for about forty feet and showcases gorgeous high-reliefs. A famous school, St Louis de Gonzague, moved there in 1894 under the direction of the Jesuit Order. The school was casually called after the name of the Famous Man : Franklin. Being an Alumnus of “Franklin” was and still is a sign of high-quality education. Did the educational virtues of Benjamin Franklin play a role in this? Other schools, St Jean de Passy, Sainte-Marie de Passy (until 1970) also settled in Franklin Street.

At the end of the street, a magnificent bronze statue can be found.

Its plinth bears votive inscriptions and two bronze bas-reliefs. The statue is a copy of the one carved by John J. Boyle and sitting in Philadelphia. It was offered by an American banker John H. Haryes in 1906. On the pedestal, two bas-reliefs by Frédéric Brou : one represents Louis XVI welcoming Benjamin Franklin at the court in Versailles in 1778, the other one shows the treaty of Paris being signed in 1783.

The front of the pedestal displays a quote by Mirabeau, on June 14th 1790, calling for the celebration of the memory of Benjamin Franklin.

“This genius who freed America and poured streams of light over Europe, the wise that two worlds claim for themselves…”

In 1983, at the foot of the statue, a plaque was laid on the ground, commemorating the bicentennial of the treaties of Paris and Versailles which established the independence of the United States of America. The plaque was offered by the “Daughters of the American Revolution” to the city of Paris and bears this Benjamin Franklin’s saying : “the most beautiful project : working on peace.”

Apartment’s buildings progressively got built, some marking the history of architecture.

At Number 17: a building built from 1929 to 1930 by architect Marcel Hennequet in reinforced concrete whose facade includes bow-windows and decorations in ochre terrazzo, alternating with lines of white porcelain.

At Number 25 bis: a building with a reinforced concrete frame (1903) built by brothers Auguste and Gustave Perret, announcing the transition to Art Deco style.

Politician Georges Clemenceau lived at number 8 from 1896 to his death in 1929, on the ground floor of a bourgeois building of modest appearance. Nicknamed the Tiger, Georges Clemenceau was a formidable statesman of the Third Republic, previously the Mayor of Montmartre, several times Minister, and the “Man of the Victory” at the end of the “Great War” in 1918. A Museum dedicated to him can be visited in his home on Franklin Street.

On February 19th, 1919, the street was shaken by a series of detonations. Georges Clemenceau was attacked as he was leaving his home to go to the Ministry of War. The shooter: Louis Emile Cotton (1896-1936), a 22-year-old anarchist who reproached him for, among other things, having forcibly repressed the strikers in the war manufactures.

Emile Cottin shot nine times. Georges Clemenceau was hit by three bullets and sustained a shoulder injury. Emile Cotton received the death penalty but his sentence got commuted at the request of his victim.

It is worth noticing that this special Franklin Street is in good “geographic” company: located two steps away, literally, of the place of Yorktown, and half a mile away from the Avenue du President Wilson and the statue of Washington, not far from Quai Kennedy. A little further away, the Statue of Liberty enlightens the world from the extremity of Swan Island.

This article was translated in English by Anne-Cécile Baer Porter.